The Guardian blames critics of mainstream media bias for the murder of a journalist. Then quietly deletes the allegation. - Canary 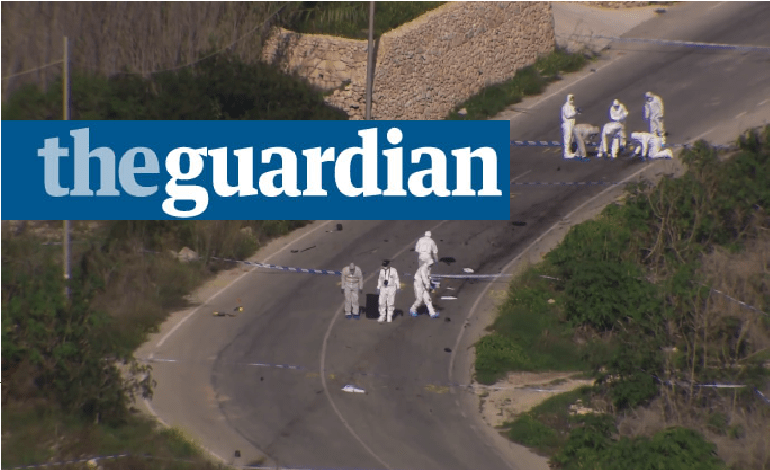 The Guardian posted an opinion piece that suggested critics of mainstream media bias are accountable for a journalist’s murder. The news outlet then quietly deleted the allegation, made by columnist Jonathan Freedland.

“Where loathing of the media can lead”

Now we have brutal evidence of where loathing of the media can lead. On Monday, Malta’s most prominent investigative journalist, Daphne Caruana Galizia, was murdered when the car she was driving was blown sky high, scattering her body parts across a field.

In the paragraph before, Freedland characterised “loathing of the media” partly as “Corbynite attacks on the BBC“. He appears to be suggesting such criticism of the media holds some responsibility for Caruana Galizia’s murder. Indeed, the original headline read:

But The Guardian then backtracked.

Usually, when The Guardian edits an article after publication, the outlet adds an explanation of the changes made, at the bottom.

This time was different. The Guardian switched the framing of the Freedland article with neither explanation nor apology. The new, amended headline read:

On top of the headline switch, the outlet changed the sentence “Now we have brutal evidence of where loathing of the media can lead” to:

This week we have had a brutal reminder of what the mainstream media does – and why we need it.

Further into the story, The Guardian added a sentence that also seemed to contradict the original copy. The original piece suggested that the murder was motivated by “some generalised opposition to the media”. The edited version said the murder was:

motivated, of course, not by some generalised opposition to the media but by the apparent desire of criminals to silence a reporter whose revelations threatened their interests…

We put that point to The Guardian. A Guardian News & Media spokesperson said:

That is a wildly inaccurate reading of either version of the article in question. The article was amended at the request of the writer to clarify the argument and avoid potential misunderstanding. We took the decision that no notification was needed because this was an editorial change – rather than a factual correction – made very soon after publication.

Somewhat disingenuously, author Freedland went on to use the edited article to absolve criticism of the original circling on social media:

Absolutely not. As you can see, I explicitly made that distinction pic.twitter.com/FFuO0WJMYd

But in the first published copy, Freedland did not make that distinction. And the original allegation provoked quite a backlash:

The sleights of hand in paragraphs 2-5 are tasteless in the extreme.

2) the hatred of the MSM is a result of their failure to do their job. She did her job, the MSM don’t.

Readers felt that The Guardian attempted to appropriate anger at the murder of a journalist and direct it towards critics of The Guardian and other mainstream outlets. Apparently feeling the backlash, the publication then tried to retract the allegation on the sly. But it was too late.