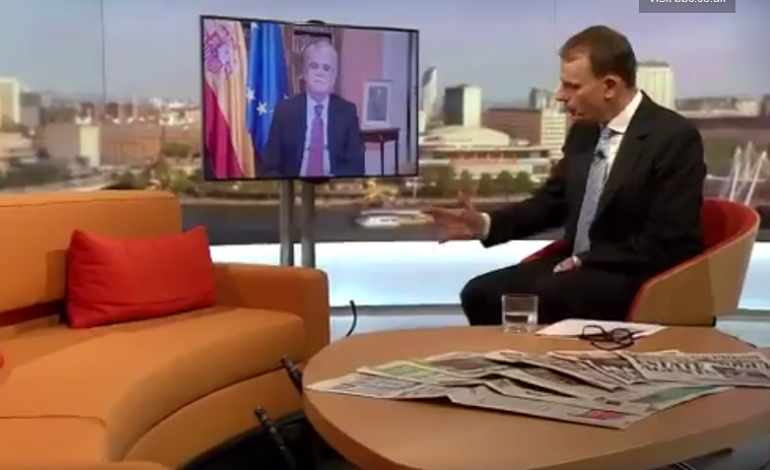 BBC host Andrew Marr interviewed Spain’s Foreign Minister, Alfonso Dastis, on his show on 22 October. He asked the minister about the police violence that took place in Catalonia during its recent independence referendum. And astonishingly, Dastis responded by suggesting that much of it was “fake news”. But over 150 videos of police violence in different locations, along with a report by Human Rights Watch, show just how absurd that suggestion is.

I don’t think there is any brutal situation… Many of those pictures have been proven to be fake pictures.

Marr responded with an incredulous “Really?”, as his show passed footage of police attacking citizens. But Dastis stuck to his claims, arguing that, where there were instances of police violence, that was due to ‘provocation’. He said:

I’m not saying that all are fake pictures, but some of them are… There have been a lot of alternative facts and fake news here… If there was at all – and according to the pictures there was – some use of force, it was not a deliberate use of force. It was a provoked use of force.

So for Dastis, it seems any force used was either accidental or the fault of the victims.

The videos that suggest Dastis is wrong

There is now a compilation of 155 videos (at the time of writing) of police violence on the day of Catalonia’s independence referendum. This includes footage from the mainstream media (such as the BBC, Al Jazeera, and Catalonia’s TV3); as well as videos uploaded by citizens.

Here are just three from that compilation:

The entire collection can be found here.

Catalonia’s Health Department also said [Catalan] on 2 October that 893 people had reported injuries in connection with police actions. But in the immediate aftermath of the violence, Spain’s King Felipe VI did not mention any of it in a television address. And if Dastis needs further proof of police violence, he only needs to see a damning report which Human Rights Watch released after the referendum.

Now, Madrid is reportedly planning to take control of Catalonia’s public television network – TV3. And following Saturday 21 October’s massive demonstration in Barcelona in opposition to the Spanish government’s plans, several thousand people took to the streets in Bilbao to show solidarity with the Catalan people. Bilbao is in the Basque Country, another region in Spain which has long had a strong independence movement.

Meanwhile, Catalan President Carles Puigdemont’s rejection of Spanish Prime Minister Mariano Rajoy’s plan to sack the Catalan government, and for Catalonia to come under the direct rule of Madrid, means the stalemate continues. And over the coming days, the Parliament of Catalonia is expected to debate whether or not to declare independence.

Catalonia, with its revolutionary past, is now at a crossroads. And its potential independence could mean the end of Spain as a viable nation state.

No wonder Madrid is desperate to label police violence as “fake news”.