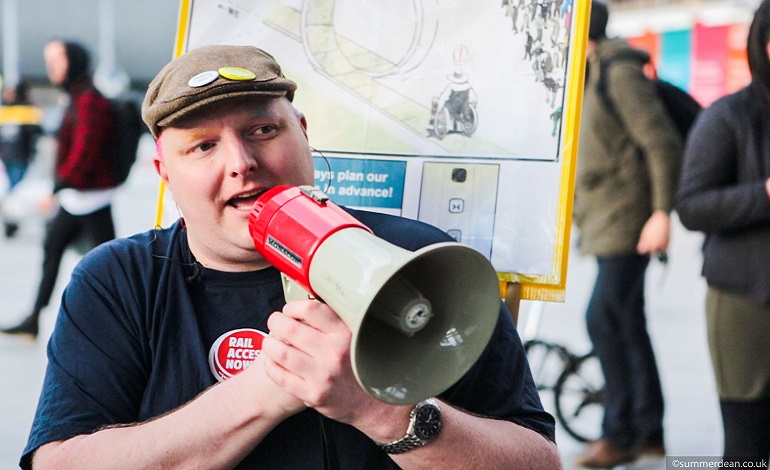 Rail passengers have criticised a proposed deal between a trade union and a train company notorious for its poor service. And they say it may well be unlawful.

The trade union ASLEF has reached a deal with Southern Rail to end a long-running dispute over Driver-Only Operation trains (DOO). ASLEF has agreed that, in return for a 28.5% pay rise over the next five years, Southern can use on-board supervisors instead of guards on DOO trains. ASLEF members will be balloted on the proposals from 24 October. But, there is a get-out clause for Southern in the deal, whereby it doesn’t have to have on-board supervisors on every train. And it is this “exceptional circumstance” that has angered passengers and campaigners.

Currently, several train companies are caught up in industrial action with both the RMT (National Union of Rail, Maritime and Transport Workers) and ASLEF over DOO trains on services. The introduction of DOO trains would mean the scrapping of conductors across many routes.

What about disabled people?

The RMT, along with campaign groups Disabled People Against Cuts (DPAC), and the Association of British Commuters (ABC) have been warning about the risks of scrapping guards. For example, disabled passengers would have to book support 24 hours in advance to get on and off trains. The groups claim this would breach the Equality Act 2010. But Southern Rail told The Canary that disabled passengers can still turn up without notice and expect support. It’s just that by booking in advance, the railway can give them “additional assistance”.

The ASLEF/Southern deal’s “exceptional circumstances” for not having an on-board supervisor are when:

These conditions will affect passengers, specifically disabled ones. As critics argue that with only a driver on the train, access for disabled people will be “impossible”.

It is extremely disappointing that ASLEF have negotiated the 28% pay deal for driver only operated trains on Southern. The deal small print needs looking at closely by all members as the devil is in the detail. The words exceptional circumstances mean that if crew are sick or late the train can run without an on-board supervisor. This has huge implications for all passengers’ safety and those with access needs. When an on-board supervisor is not on that train it makes access impossible. It’s already happening and it’s not fun to be left on the platform, stranded and unable to access the train due to lack of support

Within a few years of this Southern will probably remove the role. We urge ASLEF members to think of all passenger safety and access including that of their families before they vote on this deal. If they agree this DOO deal disabled people will find it incredibly difficult to access the rail network and travel independently. It will take for a passenger to be trapped in the doors and die or a terrorist attack to happen to realise what a grave mistake DOO is.

The proposed deal also appears to fly in the face of comments previously made by the union’s General Secretary. Because in Scotland, ASLEF and the RMT won a battle to stop DOO trains, and keep guards on them. At the time, ASLEF’s Mick Whelan said:

We threatened a judicial review in Scotland about disabled access because the law in Scotland on transport access was far stronger than down here, and that helped us win. I believe Southern are suggesting that disabled people in England ring up 24 hours in advance of when they want to travel. The whole basis of the industry is ‘step on and go’. The idea that sectors of our community should have to book in advance when others don’t is anathema to me. Everybody should have the same access and rights to get on and off a train.

One passenger group even warned that the ASLEF/Southern deal could in fact break the law.

Co-Founder of the ABC Emily Yates told The Canary:

The agreement made by the ASLEF leadership fails to guarantee disabled access on Southern Rail. It will establish a breach of the Equality Act – a precedent that unmanned trains can be run to unmanned stations.

The anger that has emerged about this is understandable. But any rift between Aslef and the RMT should not overshadow the real cause of the disabled access crisis on Southern. This lies with the Department for Transport and Rail Delivery Group, who have sidelined the issue of disabled access over a number of years.

Despite serious concerns about disabled access since 2016, the Rail Delivery Group’s 2015 report on the topic remained buried until it was leaked in June this year. The report strongly argued for keeping the guard on the train, warning that leaving passengers without assistance would form a breach of the Equality Act, section 20.

Since DOO was introduced on Southern Rail, we have regularly heard of disabled people being abandoned on platforms, left on trains and even returned to their home without ever reaching their destination. It is a source of great stress to many disabled travellers. And these are only the people we hear from, not the many thousands more who might be stuck at home and too nervous to travel.

If the government get their way on this, a legal challenge from disabled passengers will be inevitable.

We will not make any further comment beyond the statement we have already made until the referendum [ASLEF ballot] is concluded.

The Canary asked ASLEF for comment, but didn’t receive one at the time of publication.

Trade unions have a primary responsibility to work in the best interests of their members. ASLEF, in this case, appears to be doing this.

But they also have a responsibility to members of the public when their actions affect them. Disabled people are constantly having to fight for basic rights in the UK. And to many, it must seem ridiculous that in 2017 a disabled person cannot simply ‘turn up and go’ at a train station. Like everybody else. Sadly, it appears that this is of little concern to ASLEF. So, disabled people have a right to be angry. Because this time ‘solidarity’ from the union only extends so far.

This article was updated at 9.30pm on 23 October to reflect an additional comment from the ABC.

– Passengers who’ve suffered because of a train company can contact the ABC.