Jeremy Corbyn asked Theresa May a simple question about Brexit. She couldn't even answer that. [VIDEO] - Canary 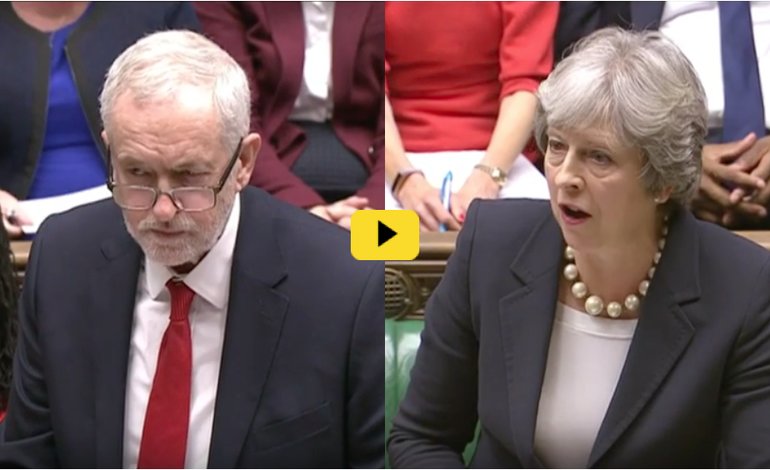 The Prime Minister was unable to answer a simple question about Brexit at Prime Minister’s Questions (PMQs) on 22 November. The failure highlights a major inconsistency in the government’s approach to Brexit.

Jeremy Corbyn’s question focused on the contradicting stories on Brexit coming from the Conservatives. Pro-Brexit Conservative MP for Wokingham John Redwood has spent years telling UK voters that leaving the EU is not only a good idea, but simple and painless. He has argued that stringent post-Brexit trade tariffs can be overcome by buying British cars, wine and cheese. And in a recent blogpost entitled Getting out of the EU can be quick and easy – the UK holds most of the cards in any negotiation, he wrote:

Too many people in government and the professions seem to think the UK is a weak petitioner which has to be very careful in case we are expelled from the single market.

But it turns out that Redwood has been making very different arguments in his second job.

In addition to his duties as an MP, Redwood earns £180,000 a year as chief global strategist for wealth management company Charles Stanley. And in that role, Redwood has been advising clients to pull their money out of the UK due to economic uncertainty. In a column for The Financial Times published on 3 November, Redwood advised investors to “look further afield as UK hits brakes”. In the same column, he praised the European Central Bank’s president for promoting faster growth.

To protect his job as an investment manager, he warned his wealthy clients to get their money out before the disaster hits. To me, this smacks of disaster capitalism. Engineer a crash while ensuring your own interests are protected, then clean up when it hits. This is despicable behaviour by a lawmaker.

Theresa May has had several weeks to plan her answer to Redwood’s column. And her opportunity to give that answer came at PMQs on 22 November. The Labour leader walked parliament through the issue once more, and asked the PM:

Does the Prime Minister take advice from the member for Wokingham? And does she agree with him?

But Theresa May had no answer. Rather than disagree with Redwood’s assessment, she dodged the question entirely; robotically repeating an answer to an earlier question and ignoring the issue. Worse, this failure came just minutes before Chancellor Philip Hammond set out his autumn budget.

As uncertainty about Brexit increases, it appears the Prime Minister cannot even convince her own MPs that the economy is safe in her hands.