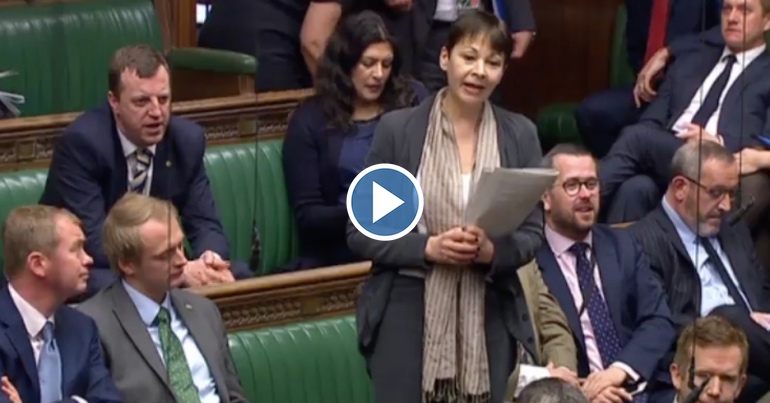 Green MP Caroline Lucas asked an important question about the state of our democracy at prime minister’s questions (PMQs) on 28 March. But the response she received from Conservative MPs was such a disgrace that the speaker had to step in.

Lucas wanted to know whether Theresa May would engage in cross-party talks in response to allegations surrounding Cambridge Analytica and election fraud. As Lucas began speaking, Conservative MPs started jeering. The noise was so intense that the speaker, John Bercow, had to intervene:

This is very unseemly… Caroline Lucas will be heard.

Eventually, Lucas was able to ask her question:

The Cambridge Analytica revelations suggest that there is something rotten in the state of our democracy. The current electoral law is woefully inadequate at dealing with the combination of big money and big data. So will the prime minister commit to urgent cross-party talks to kickstart a process to ensure that we have a regulatory and legal framework that is up to the challenge of dealing with the digital age?

But May’s response was so noncommittal that Lucas was just left shaking her head:

Tory MPs tried to shout down my question to the Prime Minister today, but I won't be silenced.

Will the government convene cross-party talks to address the rot in our politics exposed by the Cambridge Analytica scandal? #PMQs pic.twitter.com/DwzzL2nsnQ

As The Canary previously reported, Cambridge Analytica harvested the Facebook data of hundreds of millions of people to micro-target political ads for Donald Trump and the Brexit Leave campaign. Media reports before the scandal also linked the firm to Conservative Party election campaigns in the UK.

Speaking to MPs on 27 March, Cambridge Analytica whistleblower Christopher Wylie went further. He claimed the EU referendum was won through election fraud and accused pro-Brexit campaigns of having a “common plan” to circumvent election spending rules.

Lucas is right. There is something rotten about parliamentary democracy, and it’s not just about big money and big data.

And when an MP has to tweet that she “won’t be silenced” for asking the prime minister a question, then we all need to ask questions about the way our democracy is working.

– Join The Canary and support and the work we do.