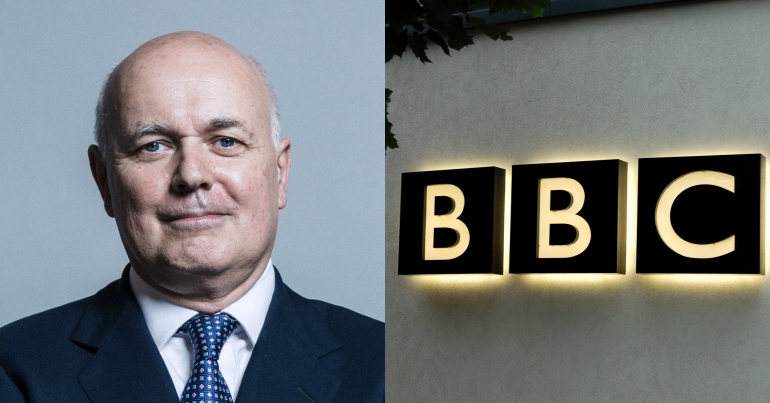 The architect of one of the most disastrous government welfare reforms was given a free ride to rewrite history on a BBC radio programme. Former secretary of state for work and pensions Iain Duncan Smith appeared on Radio 4‘s Reflections programme.

Duncan Smith presented Universal Credit as part of his work for social justice. And he was not challenged on the misery and poverty that his flagship programme is causing for thousands of people across the country.

explore their early formative influences, their experiences and their impressions of people they’ve known.

So admittedly, it makes no claims to be a hard-hitting political programme. And if you’re exceptionally bored and want to listen to Duncan Smith wax lyrical about his parents and his upbringing, then this could be the programme for you.

But towards the end of the programme, Hennessy turned to Duncan Smith’s work with the Centre for Social Justice, a think tank he co-founded. And this is when the programme became an utter disgrace.

Universal Credit was the key, was it not? It was your way of modernising the entire welfare system. They had real problems with that.

Universal Credit was looking at the problem… there is a real problem with complexity in the benefit system which makes it very difficult for people to navigate. Those six benefits – you try and merge those together so that when people make a claim everything they want to do is done at that same point.

He then talked about how easy it was for people to know how much money they would lose if they worked meaning that:

all the way through they can then understand how much money they are due which is immediately told to them… there are no cliff edges and no disincentives.

Yep, Duncan Smith was allowed to talk about the system that’s driven people to debt, food banks, homelessness and that causes mental health problems as having ‘no cliff edge’ without interruption or incredulity.

The nearest Hennessy got to challenging Duncan Smith’s assertions was to ask:

Were the criticisms of the National Audit Office which were quite severe about all this justified?

Firstly Duncan Smith tried to argue that rolling out the system had made it better:

What we did was we said we’d roll it out stage by stage which was very unusual, so that everytime you rolled it out to a group, you can check to see whether there’s a problems as it hits the human interface and make the changes.

So, the system gets tweaked when it hits real people; a system where human guinea pigs are forced to use food banks, lose their homes and spiral into a cycle of poverty and debt. This isn’t a fucking “human interface”. These are real fucking people. People whose lives you’ve ruined with your disastrous policy. How about next time you want to test a system when it “hits a human interface” you try it out on Tory MPs first?

Again, neither these assertions nor this use of language was questioned by Hennessy.

Duncan Smith then pretty much repeated the line current work and pensions secretary Esther McVey was slated for taking about the National Audit Office (NAO) report:

Big changes were made in December which are already now having an impact and I argued for a lot of those.

McVey claimed in parliament that the report was based on out-of-date figures and that the NAO “did not take into account the impact of our recent changes”.  But the NAO hit back, claiming:

Our report was fully agreed with senior officials in your department. It is based in the most accurate and up-to-date information from your department. Your department confirmed this to me in writing on 6 June and we then reached final agreement on the report by 8 June. It is odd that by 15 June you you felt able to say the NAO ‘did not take into account the impact of our recent changes’. You reiterated these statements on 2 July but we have seen no evidence of such impacts nor fresh information.

Hennessy’s interview was simply not good enough. It’s one thing to allow politicians to ‘reflect’ on their careers and the impact of their policies. It’s another to do so without challenging the harm these policies cause. This is especially the case when the resulting legacy is both ongoing and toxic.

Anyone who’s experienced the sharp end of Universal Credit – or the “human interface” as Duncan Smith puts it – should be appalled that the BBC broadcast such a puff piece.

– Support The Canary so we can carry on the work we do.