A Lib Dem sing-along already sounds like a nightmare. But they turned it into something truly horrific. - Canary 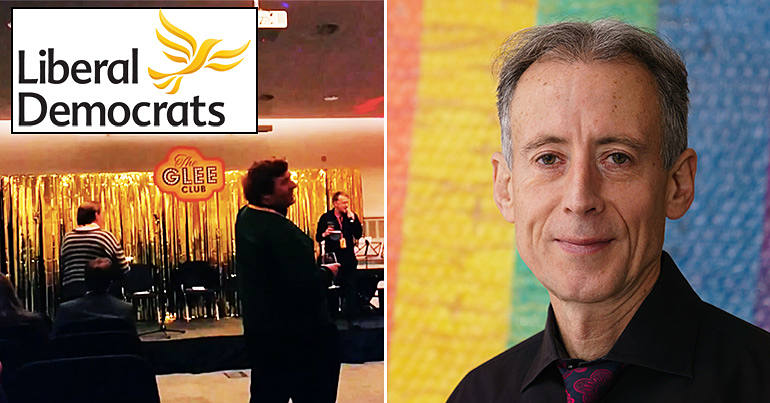 Keeping up with the times, the Liberal Democrats held their annual group singalong or ‘Glee Club’ at the party conference in Brighton on Sunday 17 September.

And as if the idea of a Lib Dem Glee Club wasn’t questionable enough, someone decided to add insult to injury by getting a room full of party members to sing a song celebrating a spectacularly homophobic campaign.

Lost in the past

The song in question is a celebration of the Lib Dems’ win against Labour in the infamous 1983 Bermondsey by-election.

In the run-up to the election, the Lib Dems (then called the Liberals) used dog-whistle homophobia to smear Labour candidate Peter Tatchell. Writing in Pink News, Tatchell said:

They published leaflets which stated there was a “straight choice” between myself and [Liberal candidate] Simon Hughes.

Tatchell, a committed LGBTQ+ rights campaigner, has described the treatment he received during the campaign as “the most sustained homophobic vilification of any public figure since Oscar Wilde.”

But that didn’t stop the Lib Dems celebrating the win 35 years later:

Simon Hughes just led a rousing chorus of this 1983 song about Bermondsey. Hmmm anything missing from this account of history? ? pic.twitter.com/zxWuhmiOaD

The song, entitled ‘Bermondsey’, is set to the tune of US Civil War era anthem Marching Through Georgia.

And it contains the lyrics “Tatchell hit the headlines, boys” and “Tatchell went, and Tilley came and said that he was straight”.

Delighted to see a Lib Dem conference event including a song celebrating the infamously, repulsively homophobic campaign in Bermondsey in 1983. Jolly good. https://t.co/ZWFE6v3y4R

also the actual lyrics are a fucking embarrassing load of bollocks, imagine singing that

Although high-ranking Lib Dems apparently took little issue with the campaign for decades, 23 years after the by-election the Lib Dem candidate who won the London seat, Simon Hughes, issued an apology:

It was unacceptable, and I hope that there will never be that sort of campaign again.

Hughes, who later came out as bisexual, was reportedly in the crowd on Sunday night in Brighton, apparently singing along to the song.

When asked for a response to this year’s Glee Club incident, Hughes told the Mirror that it was:

A song sung every year for many years with no previous expressed concerns.

It’s a song not a political history.

The Lib Dem Glee Club also decided to include a song taking aim at former party leader Tim Farron for his ‘traditionalist’ views on gay sex:

The tune condemning Farron for his perceived homophobia includes the verse:

Except for, you know, all of them,

So when I flounced off in a huff,

But won’t shut up about this stuff

At least I’m not a puff,

Not so liberal liberalism

The light-hearted liberalism of the Lib Dems’ lyrics quickly falls to pieces under close scrutiny.

Whether it’s celebrating a homophobic campaign or laughing at the expense of former MP Charles Kennedy’s alcoholism (of which he died), its annual Glee Club is little more than offensive, out-dated bullying.

Sadly, many have come to expect such disgraceful behaviour from a party responsible for inflicting crippling austerity. Maybe punching down is just the Lib Dems’ way.