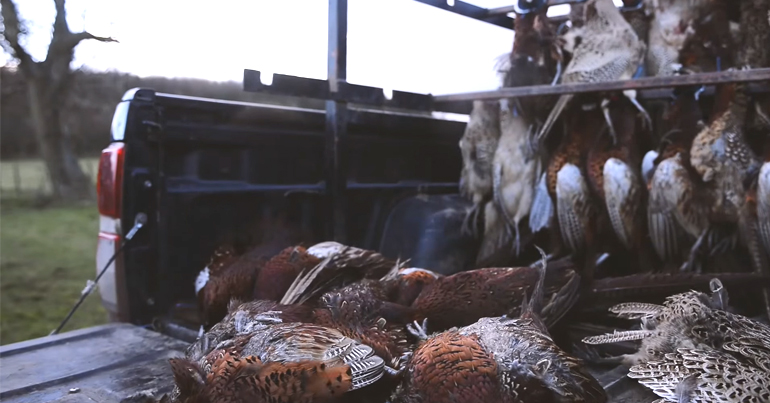 National Resources Wales (NRW) has chosen not to renew pheasant and gamebird shooting licences on its land from March 2019. Anti-shooting campaigners have celebrated the decision as a victory for wildlife. But one group wasn’t happy at all.

On 20 September, NRW announced it wouldn’t renew licences for shooting pheasants and other game birds on its land. The change will take effect in March 2019. The Daily Post quoted Hannah Blythyn, Welsh environment minister, as saying:

It comes after a campaign by Animal Aid began in October 2015. The animal rights group said a review of pheasant and gamebird shooting by the Welsh government resulted from its campaign. A petition during the review collected over 12,700 signatures. And a public consultation showed 76% of responses wanted the ban.

The NRW said it currently leases 293 hectares of land for shooting.

Animal Aid said the news was a “massive victory”:

Thank you all so much for helping us achieve this massive victory for animals!https://t.co/MvM5ssSb3t

And it was met with delight on Twitter by other animal rights groups:

Diolch yn fawr iawn / thank you very much to all the AMs who supported our work asked the right questions of Welsh ministers time and again and helped get us to this point, especially @bethanjenkins @JulieMorganLAB @VikkiHowells and @MikeHedgesAM #animalchampions https://t.co/mAuBZ7DEEO

This is a significant victory for environment & public!

Meanwhile, others said the decision showed the era of bloodsports is ending:

Wonderful news! The tide is steadily turning against bloodsportshttps://t.co/XnWVOmwRjN

Big news.
Times are changing. Be part of it. Get active for wildlife. HIT.https://t.co/UhMvnBq6GE

Oh, sniff that. Fill your lungs. That's the wind of change, that is, and to me it smells very sweet indeed. Natural Resources Wales bans game shooting on public land. https://t.co/fQWmk7DnOm via @RaptorPersScot

But the news didn’t please everybody. One small section of the population was very unhappy: shooters.

The British Association for Shooting and Conservation said the decision “pandered to animal rights extremists”:

The Environment Minister for Wales, @hannahblythyn, has pandered to animal rights extremists & has then imposed their position onto @NatResWales contrary to the evidence of a comprehensive review & public consultation into the future of shooting in Wales. https://t.co/eTTmGb5cKA pic.twitter.com/x5SBCFujGz

And it described it with a straight face as the result of “the radical petitioning of extremist groups”:

BASC is astounded that the position of @NatResWales, an evidence-based organisation, can be changed by the radical petitioning of extremist groups. https://t.co/eTTmGb5cKA pic.twitter.com/2f0Kwp40uT

Epic FAIL by @NatResWales Board to resurrect their reputation as they vote to end pheasant shooting leases in 2019 leaving their reputation in shreds and gates open to revisit previous decisions they based on evidence. @LNJStokes @CA_Shooting @CA_TimB @ShootingTimes

As did the Game and Wildlife Conservation Trust:

'A blow for wildlife’ – GWCT disappointed at ‘bizarre’ Natural Resources Wales decision to end shooting on their land.

While one man, who appears to be a member of all three groups, claimed without evidence that the decision will “put many people onto benefits”:

@hannahblythyn @NatresWales this is a very concerning turn of events. On what evidence is this decision made? Shooting is worth £75 million to the economy of Wales . It'll also put many people onto benefits through this loss of income.https://t.co/7gIyLVE8vd

Shooting themselves in the foot

The pheasant shooting season runs between 1 October and 1 February. And its scale is immense. The biomass of pheasants released for shooting annually comes in at 40,000 tonnes. By comparison, the entire regular UK bird population weighs in at just 25,000 tonnes.

Shooting is also damaging to other animals. Up to 400,000 wild birds are poisoned each year by lead shot. And the deaths of rare birds have also been linked to game shoots.

As a result, shooters have fallen back onto using jobs and the economy as the main defence for their hobby. But this is a sure sign that bloodsport enthusiasts are quickly running out of excuses. The future is getting brighter for animals and wildlife in the UK. And NRW’s decision is a high point.

– Read more at The Canary about game shooting.

– Go on the People’s Walk for Wildlife on 22 September.