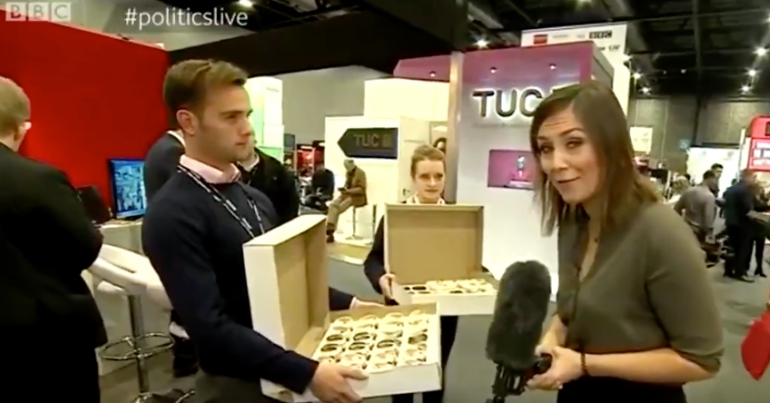 The Labour Party recently announced plans for a female joint deputy leader. Although the plans were ditched, the BBC canvassed Labour Party members over who they’d like to see as a female Labour leader.

So far, so good. Not so good was the fact that it needed a gimmick. Even worse was that the gimmick involved cupcakes. Yes, cupcakes. And not only did the BBC decide to represent strong women through the medium of cupcakes, but it only included white women.

The BBC chose the wrong women to ask, however, as they immediately pointed out the lack of diversity in the BBC‘s baking products. And they asked why they couldn’t choose Diane Abbott or Dawn Butler.

However, Politics Live presenter Elizabeth Glinka claimed that the choices were made based on odds from bookies:

.@AaronBastani to be clear we did not make these choices at random we used the bookies top 3 women https://t.co/ynzqBK7sVX pic.twitter.com/dBGP3MvrVB

Although Bastani said in response that he was joking, many people still thought it was an issue:

Wait a minute you are telling me that @BBC only made white female cupcakes and then spoke to BAME @UKLabour activists who went for @HackneyAbbott and none where available? This is truly shocking and infact vile in it nature. #racistcupcakes #Lab18 ?

But it wasn’t just the lack of representation of Black and Minority Ethnic (BAME) women that was a problem. As people pointed out, there were issues with the whole presentation of the segment:

#politicslive Choose next leader of the labour party using cupcakes! Patronising or just bbc dumbing down!

In the 2017 general election, a record number of women were elected. But this only took female representation in parliament to 32%, so there’s a long way to go before women have a fair and equal voice in our government.

Meanwhile, diversity is an even bigger problem. Again, 2017 saw record numbers of BAME candidates elected. But that still took the total to a mere 52 MPs.

These are serious issues. The BBC using cupcakes to represent female candidates is not a bit of fun. It’s patronising, sexist rubbish. And while it may have a defence in using the bookies’ favourites in choosing whose images it placed on the cupcakes, the fact that it didn’t even think about diverse representation speaks volumes.