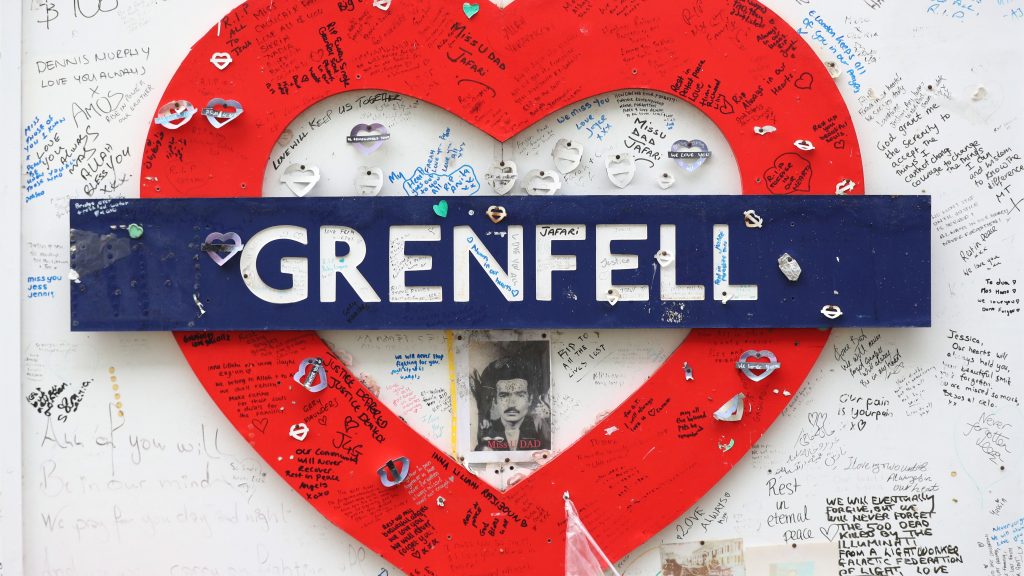 Bereaved and survivors of the Grenfell Tower fire are demanding charges against those responsible for the disaster, amid a warning that patience is running out more than four years on from the deadly blaze. A silent walk organised by campaign group Grenfell United is being held for the first time in 18 months, as those affected join together near the site to remember the 72 lives lost and countless others caught up in the events of June 14 2017.

Demonstrators will gather outside Kensington Town Hall in west London on Tuesday evening, on the four-and-a-half year anniversary of the fire, to call for prosecutions to be brought against those responsible, and walk to the base of the burnt-out block of flats.

The government’s apology is “meaningless”

Resident Edward Daffarn, who lived on the 16th floor and had been a long-term campaigner about issues at the tower, described a government apology as “meaningless”, coming so long after the event, adding: “We need to see action and change.”

The government apologised as part of the public inquiry into the fire, for past failures in oversight of the system regulating safety within the construction industry and the supervision of building control bodies. Daffarn said there is a renewed urgency for justice.

I think that justice is probably what is most important to most people.

And we’re using the four-and-a-half year anniversary to let those with power and in authority know justice delayed is justice denied.

And we need these people to start taking action against the perpetrators of the crimes committed against us.

We’ve been very dignified, but our patience is running out now, and we need the Crown Prosecution Service and the Met Police to start taking action against the perpetrators.

The walk comes exactly a week after the government apology at the public inquiry. A lawyer representing the Department for Levelling Up, Housing and Communities told a hearing that mistakes and missed opportunities to learn from previous fires created the environment for the blaze to happen. Phase two of the inquiry is examining how the tower came to be coated in flammable materials that contributed to the spread of flames, which shot up the building.

Module six of the second phase is concerned with building regulations and the published guidance on fire safety, including detailed consideration of Government policy.

The inquiry has previously heard from a lawyer for the families of survivors and relatives of the bereaved who stated that the fire occurred partly as a result of an “unbridled passion for deregulation”, with a desire to boost housing construction having led to the industry being allowed to exploit regulations.

The walk also comes a week after Mercedes ended its controversial sponsorship deal with Kingspan, saying it was “not appropriate” to continue the partnership. Kingspan’s logo appeared on the helmet of Lewis Hamilton at the Saudi Arabian Grand Prix, sparking protests due to the use of Kingspan products in the tower.

Speaking ahead of Tuesday’s event, Daffarn said it would be “very emotional” to walk again with the group for the first time in so long. He added:

What we’ve missed is that sort of ability to commune, to actually come together to see our friends, to see our neighbours, to see community members.

And that coming together offers a balm and a healing that we’ve really, really felt an acute pain in not being able to do.

He said it has been “so difficult being apart for this length of time”.

A spokesperson for the Metropolitan Police said its investigation into the fire “continues at pace”, adding that to date there has been one arrest for perverting the course of justice and a number of interviews under caution for gross negligence manslaughter, corporate manslaughter, fraud and health and safety offences.

The police and the CPS agree that the criminal investigation must take into account any findings or reports produced by the inquiry, including its final reports for both Phase 1 and Phase 2.

If the police investigation concludes there is sufficient evidence to consider criminal charges in relation to the fire, a file will be submitted to the CPS for a decision. We have had regular engagement with the CPS since the beginning of the investigation and continue to do so.

We can only imagine the impact on families of a long and complex investigation and public inquiry and we do understand their frustrations.

We have always explained to families and survivors this is large and complex criminal investigation and the anticipated timeline for the police.