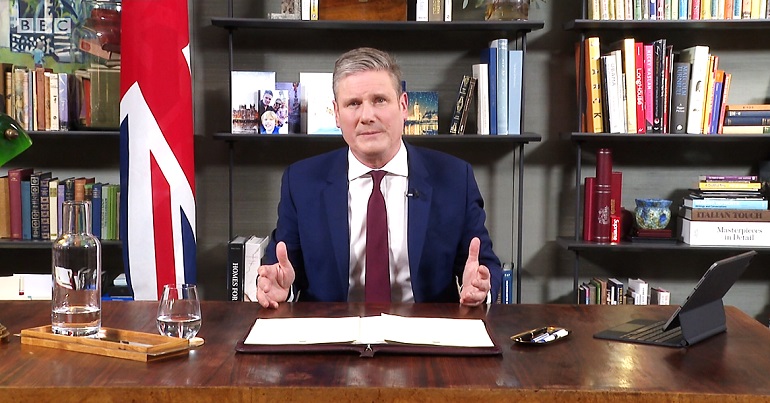 Keir Starmer’s televised address to the nation just cemented his right-wing credentials. Because the speech was filled with so-called Blue Labour posturing. And this coupled with his previous actions confirm Labour’s direction of ideological travel.

As the Mirror reported, the BBC broadcast a pre-recorded address by Starmer on Monday 13 December. It was in response to Boris Johnson’s one the previous day. During his speech, Starmer said Labour would support the government over its coronavirus (Covid-19) vaccine booster programme and the contentious Covid passports. But with around 75 Tory MPs set to vote against the government, Starmer could have inflicted a humiliating defeat on the government.

Moreover, Labour had previously said it was against Covid passports on the grounds they’d be “discriminatory”. The issue is clearly controversial as Jeremy Corbyn has also spoken out against them. And as Big Brother Watch tweeted:

🚨@sajidjavid says a Covid pass will require 3 jabs, not 2, in the New Year.

There’s nothing temporary about a Covid pass. It’s an obliteration of medical privacy + free choice.

MPs must vote NO to Covid passes & mandatory vaccines for the NHS tomorrow.pic.twitter.com/pU3DQjZgyJ

So, it seems Starmer is passing up a golden opportunity to annihilate the Tories. Unsurprising, really, when you look at his televised speech.

The stage-setting was intentionally done: the now omnipresent union jack; a photo of his family in the background; Christmas cards; the formal folder and pen holder and a book on Barack Obama. It all points to Labour’s attempts to brand Starmer as politically modern but with traditional British values.

But crucially, he was once again pushing patriotism. The Mirror reported he said:

We are a patriotic party. And it is our patriotic duty to vote for these measures to ensure that they go through.

So, as political strategist and arch Blairite John McTernan summed up on Twitter:

Pitch-perfect. Every detail correct down to the flag, family, and patriotism. pic.twitter.com/IORtPbYy4o

“Flag, family and patriotism” is peak Blue Labour. As The Canary wrote in 2020, this ideology is about:

This is exactly what Starmer presented to the nation, and what McTernan summed up in his tweet. And, it’s partly the direction Labour has been going for a while. From pro-war support for the military to Starmer’s muted opinions on Trans rights, the party is becoming socially conservative. Recently, Starmer’s lack of support for MP Zarah Sultana in the face of racist abuse sums this up, too.

But it still seems unclear how economically left wing Labour will be. For example, there was confusion between Starmer and Miliband’s stances on energy renationalisation. Plus, the Financial Times (FT) said that Starmer and shadow chancellor Rachel Reeves have been “wooing” business; hardly ‘Corbynomics’.

The problem with all this is, as one Twitter user alluded to, you’ve essentially got two cheeks of a very similar arse leading the country – with a binary choice at any election:

What do you call the Leader of the Opposition who doesn't Oppose?

So, while Starmer’s party may lead in the polls at present – how long his Blue Labour approach will wash with voters remains to be seen. Because no one does ‘Tory’ better than the Tories – and the public may soon start to see through this.