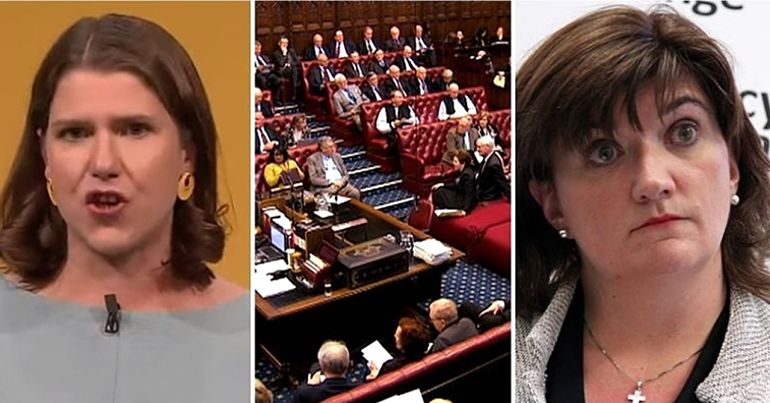 Despite losing almost half of her pre-election MPs and leading her party to its second worst defeat in its history, Jo Swinson could be heading to the house of Lords. So she still might have influence over UK legislation.

And if this happens, she won’t be the only former MP from the last parliament there. She’ll be accompanied by former Conservative MP Nicky Morgan, who will continue as culture secretary, despite supposedly stepping away from politics for “personal reasons”. And Zac Goldsmith is expected to continue as environment minister with a peerage even though he lost his Richmond Park seat for the second time.

If people were in any doubt about the need to reform this house, then “parachuting” failed politicians should make it crystal clear that it’s long overdue.

How is that possible?

It’s hard to comprehend how, in a democratic society, such large numbers of unelected people can make changes to legislation. Worse still, voters have directly rejected Swinson and Goldsmith. And Morgan simply refused to stand before her constituents.

Morgan will be remembered for her unintelligible defence of Boris Johnson’s lie about 50,000 ‘extra’ nurses for the NHS during the recent election campaign. Jo Swinson lost her seat to the SNP despite claiming she could be the next prime minister. And despite a disastrous Lib Dem election, Goldsmith lost his seat to a Lib Dem candidate. Yet all three of them could have a direct influence over UK legislation.

Caretaker leader of the Lib Dems Ed Davey said he wanted Jo Swinson “back in parliament as soon as possible”. And this could happen if her party nominates her as a baroness in the dissolution honours list. The government is appointing Morgan and Goldsmith to the Lords as part of a mini cabinet reshuffle.

None of the Lords’ members stand for election. Members are appointed by the Queen or on the advice of the prime minister. The Lords make and shape legislation along with the house of commons. They also examine each bill before approving it to become law. This is something which will affect the lives of everybody in the UK.

It has been reformed in the past. And as a result, most of its members get their seats from appointments as opposed to hereditary entitlement. But that’s hardly the kind of reform needed in a functioning democracy. The Electoral Reform Society described it as:

a bloated private members club in drastic need of some democratic accountability.

At the time of publication – because the number can increase – there are 796 members in the Lords. And each peer claims an average of around £25,800 in expenses and allowances per year. This is quite a large expense for an unelected body.

Calls for the abolition or total reform of the house of Lords are hardly new. But they are still relevant. The idea that an unelected house can be allowed make decisions that directly affect people’s lives is repulsive. Reforms introduced in the past only appear to have enabled it to continue as an unelected chamber.

But, if there’s one good thing that might come from Swinson, Morgan and Goldsmith’s appointment, it’s that it could lead to fast-track reform. And that’s something long overdue in a democratic society.