Hammond: No-deal Brexit would be ‘betrayal’ of referendum result - Canary 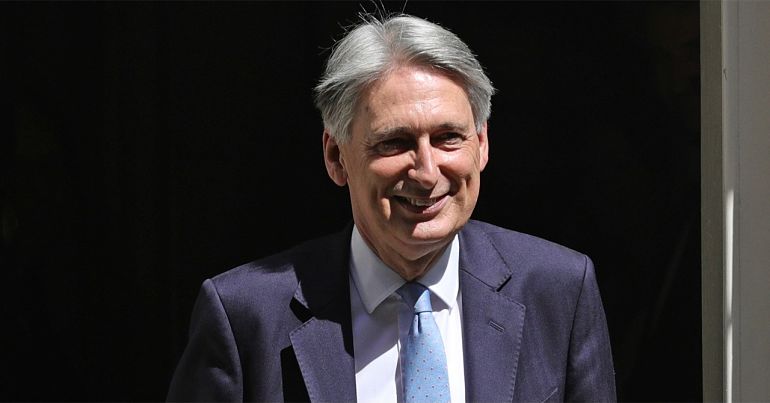 Leaving the EU without a deal would be “as much a betrayal” of the referendum as not leaving at all and could cause “irreparable damage” to the union of the UK, Philip Hammond has said.

The Tory former chancellor also hit out at “those who are pulling the strings in Downing Street, those who are setting the strategy”, and said trying to “bypass Parliament” to force through a no-deal Brexit would “provoke a constitutional crisis”.

Speaking on BBC Radio 4’s Today programme, Hammond said the prime minister’s attempts to get the EU to back down on the backstop are a “wrecking tactic”.

Hammond said: “Leaving the EU without a deal would be just as much a betrayal of the referendum result as not leaving at all.

“The British people were offered a proposition that we could leave the European Union while having a close relationship, they were told it would be the easiest deal ever done.

“And all the evidence points to people wanting to maintain a close trading relationship with the EU to protect British jobs and British prosperity and minimise disruption in the future.

“To set the bar for negotiations so high that we inevitably leave without a deal would be a betrayal and the Prime Minister said he would get a deal and we want to see him deliver that deal.”

He added: “We were talking until a few weeks ago about the need to change the terms of the backstop and I think, although that would have been an extremely difficult discussion, it was a tough negotiating position.

“But pivoting to say that the backstop has to go in its entirety, a huge chunk of the Withdrawal Agreement just scrapped, is effectively a wrecking tactic. The people behind this know that that means there will be no deal.”

Hammond said there is no mandate for no-deal, and that most people want a close relationship with the EU to protect jobs and the economy.

He said: “Any idea of trying to bypass Parliament by dissolving it for example and holding an election over the exit date would provoke a constitutional crisis.

“We have an unwritten constitution but the principles behind it are very clear and one of them is that an outgoing government should not act in a way to prevent an incoming government from making key decisions.”

He added: “More than 17 million people did not vote to leave the EU with no deal. That is the key point here. There is no mandate for leaving with no deal.

“It is absurd to suggest that the 52% of people that voted to leave the European Union all voted to leave with no deal when, in fact, as the BBC itself has pointed out, during the referendum campaign there was virtually no mention made by the leaders of that campaign at all of the possibility of leaving with no deal.”

He said he believed the prime minister wants to get a deal with the EU but hit out at others in Downing Street who may be pushing in a different direction.

He said: “Boris Johnson has told me privately, and he’s told the country publicly, that he is determined to get a deal, and confident that he can get one.

“But I fear there are other people around him whose agenda is different.”

Hammond also accused the government of making “unsubstantiated” claims over Brexit which he said need to be checked.

He said: “I think the important thing is the facts are still put out there. Over the last three weeks I have deliberately kept quiet to allow the Prime Minister the space and time to set out his plan for getting a deal that will lead to a good Brexit.

“But we cannot simply allow the Government’s unsubstantiated message to go unchecked.

“A no-deal exit will cause significant harm to the UK economy and, potentially, irreparable damage to the union of the United Kingdom. People need to know the facts.”

Hammond’s intervention came after Speaker John Bercow warned he “will fight with every breath in my body” any attempt by the PM to suspend Parliament to force through no-deal against MPs’ wishes.

Bercow told an audience at the Edinburgh Fringe festival that he “strongly” believes the House of Commons “must have its way”, in remarks reported by the Herald newspaper.

“And if there is an attempt to circumvent, to bypass or – God forbid – to close down Parliament, that is anathema to me,” he said.

“I will fight with every breath in my body to stop that happening.”

Meanwhile, the transport secretary said the government has issued an “invitation to tender” for £300m worth of freight to make sure supplies can reach the UK after Brexit.

Grant Shapps said he will be attending the “Exit Operations” committee held in the cabinet office to “plan the detail to make sure that when we do leave, which we will do on October 31, it is as smooth as it possibly can be”.

Speaking on the Today programme, Shapps said: “It is true that we have issued an invitation to tender for £300m worth of freight, so that actually might be rail, it might be ships.”

He said it “won’t be £300m of airlifting”, saying it will be mainly shipping and rail freight.

He added: “If we do leave without a deal, we’ll be ready for it. And your description of £300m of airlifting is completely incorrect, I just want to quash that. It is actually a contract, actually an invitation to tender, but not spending a penny at this stage at all.”

He added: “We may never need it, and that is my goal. But if we do, my goal is also to be fully prepared.”