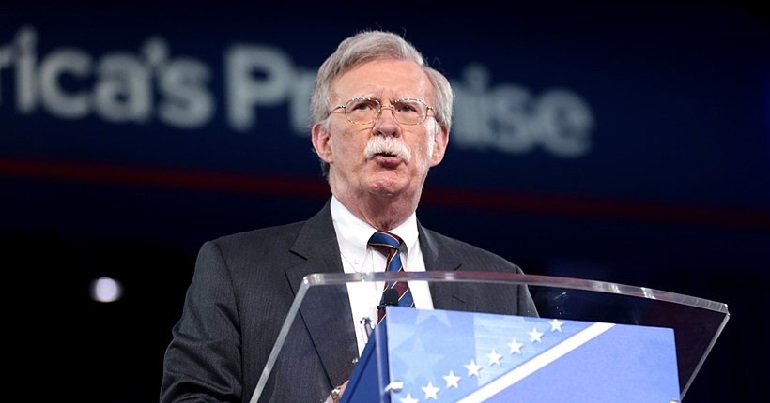 Donald Trump’s appointment of neocon war hawk John Bolton as national security adviser on 22 March has sparked worldwide alarm. And it should put the final nail in the coffin of a bad idea – making it clear that left-wingers will never find common cause with supposedly anti-war right-wing nationalists.

The appointment sent shockwaves around the world. European, South Korean and Japanese allies all fear the Bolton nomination signals that Washington has war in mind. National security experts are also worried about hardline statements from Bolton and what they mean for world diplomacy going forward. Journalist Glenn Greenwald, meanwhile, responded by tweeting:

Time to move the doomsday clock ahead by at least another 30 seconds. At least https://t.co/UV1u03WicR https://t.co/vkSzAKQihp

The rise of hawkish right-wingers

Bolton, who served as George W. Bush’s ambassador to the United Nations, favors a first strike on North Korea and regularly saber-rattles against Iran.

His nomination follows close on the heels of Tea Party hawk Mike Pompeo’s nomination to head the State Department. Like Bolton, Pompeo favors regime change in Pyongyang and opposes the Iran nuclear deal.

But nothing about the rise of hawkish right-wingers within Trump’s foreign policy team should surprise anyone. He himself hardly represents a pacifist strain on the right.

Trump famously threatened to unleash ‘fire and fury’ on North Korea. And in an early campaign season appearance on Fox News, Trump suggested killing the families of Daesh (Isis/Isil) terrorists, a tactic that would likely be considered a war crime.

What does the ‘anti-intervention’ right think?

Still, Trump continues to find praise from folks like right-wing nationalist Mike Cernovich. Cernovich is a regular host of The Alex Jones Show on InfoWars. He often claims to favor a non-interventionist foreign policy and openly opposed Trump’s strikes against Syria:

Cernovich apparently couldn’t be bothered to oppose the appointment of an obvious war hawk, though. The most he could manage was a poll asking his Twitter followers if they approved of Bolton as head of the National Security Council. And at the time of publication, with more than 6,600 votes, more than half find Bolton acceptable.

Do you generally approve of John Bolton being appointed head of the National Security Council?

Cernovich has also shown signs of support for Bolton’s appointment:

Bolton is an Iran hawk and interventionist, but the NSC leaks will stop,

and the Obama holdovers who barred Ayaan Hirsi Ali from presenting her paper on Islamic terrorism to full NSC are gonna be gone.

Be nice to have the anti-American spies out of the NSC.

Hardcore Trump supporters were pushing for Bolton, so I wouldn’t worry too much about foreign wars. (Yet.)

And remember it was McMaster pushing for ground war in Syria.

A left/right anti-war alliance? Not happening.

So why do some on the left still find the idea of joining with Cernovich to end war so appealing? Earlier this month, in an interview on The Katie Halper Show, Jimmy Dore of The Young Turks promoted the tactic, likening it to FDR pairing with Stalin to defeat Hitler.

Dore’s Cernovich suggestion comes from a nearly year-old article from Australian independent journalist Caitlin Johnstone, who advocated working with people like Cernovich and others within the “anti-establishment right” to end wars.

Johnstone’s piece set off a firestorm on Twitter, with many left-wingers decrying her as tone deaf on the concerns of people of color and women. To this day, many leftists refuse to associate themselves with Johnstone or with those who promote the notion of pairing with Cernovich.

Anyone advocating an alliance with the alt right is trash that needs to be taken to the bin. https://t.co/saTa8w4UmT

On the subject of "working" with the alt right to tear down the establishment, HARD PASS.

Cernovich’s lack of meaningful response to Bolton’s appointment should finally put the matter to bed. An already hawkish Trump administration inches closer to war on multiple fronts. The left cannot afford anything less than a full-throated commitment to peace.

No part of the right wing has any permanent commitment to pacifism. Pretending otherwise will only give greater strength to the enemies of peace.