Bernie Sanders speaks out against voter suppression in US elections. And he's not alone. - The Canary 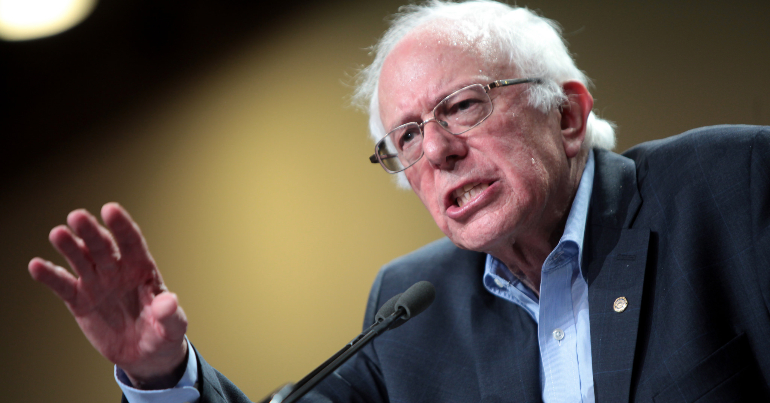 The ‘blue wave’ that commentators had predicted to take place in the recent US mid-term elections was a partial disappointment. But as a number of prominent figures like Bernie Sanders have now pointed out, the rout may have been more decisive had the election been a cleaner fight.

In the 6 November mid-terms, Democrats won back control of the House of Representatives. But they failed to win back the Senate, and were lagging in several state-level races as polls closed.

Some commentators (and, of course, Trump himself) claimed that, since the ‘blue wave’ was not as forthcoming as Democrats had hoped, the result represented a significant victory for Republicans. But now, several figures from the left and center of the spectrum have argued that Democrats would have triumphed in more races had the contests been completely free and fair – an issue that was already a worry in the run-up to the vote.

Amid calls for the recounting of votes in some races, Bernie Sanders was particularly critical of the Republican Party’s behaviour:

While Republicans across the country are trying to suppress the vote and undermine American democracy, election officials in FL, GA and AZ must do their jobs and count every vote. They must not allow the president, a bully & a pathological liar, or anyone else to intimidate them.

He insisted in particular that election officials in Florida, Arizona and Georgia should press ahead with the recounts in spite of Republican legal challenges.

At the time of writing, Stacey Abrams trails Republican candidate Brian Kemp in the Georgia governorship race. Though she is behind on votes, she has held firm on not conceding until every vote is counted. According to the state’s electoral law, a candidate must get above 50% of the vote in order to win – and failure to do so results in a run-off between the top two candidates. Therefore, Abrams is counting on Kemp’s vote count dipping below that threshold as the final ballots are counted.

Some, however, are now arguing that – had the contest been above-board from the get-go – there would have been no need for this kind of last-minute Hail Mary. For example, Hillary Clinton said: “If she had a fair election, she already would have won.” And the president of the influential National Association for the Advancement of Colored People echoed these sentiments in a public statement, saying:

Kemp’s actions during the election were textbook voter suppression. His actions were strategic, careless and aimed at silencing the voting power of communities of color in the state.

Down to the wire in Florida

In a similarly close race in Florida, Democrat Andrew Gillum conceded defeat to Republican rival Ron DeSantis only to later withdraw his concession after realizing how close the vote count was. Democrats are hoping for a recount that will come out in Gillum’s favor.

Florida’s Senate race has also come down to the wire. Initial exit polls showed Republican challenger Rick Scott ahead of Democratic incumbent Bill Nelson. But with only a tiny percentage separating the two candidates, a hand recount began (where officials check every ballot by hand). Scott soon cried foul. And he even sued one of the state’s electoral supervisor officials, claiming that she was trying to “steal” the election away from him. He then refused to recuse himself from the case – he remains in his position as the state’s governor until the end of the year.

Technically, the elections are individual state matters that don’t concern the president. But naturally, Trump couldn’t resist the temptation to wade in. He claimed, providing no evidence, that officials in two Florida counties are deliberately attempting to rig the election.

Democrats responded to Trump’s remarks by saying that he should “stop bullying, harassing and lying” about the recount processes in the respective states. Bernie Sanders, meanwhile, called on election officals to ignore his “authoritarian” ramblings:

Here is the simple truth. Donald Trump, like his friends in Russia, Saudi Arabia and North Korea, is an authoritarian leader who does not believe in democracy. The election officials in FL, GA and AZ must ignore the rantings of this president and COUNT EVERY VOTE.

Republicans seem willing to use all manner of tools at their disposal to ensure victory. And now, with voter suppression failing to put them clearly over the finish line, they are resorting to legal stalling tactics to do so. Democrats must resist this. Although they can’t undo the voter suppression that took place in the elections, they must press ahead with their efforts to make sure every vote cast is counted and exhaust all recount provisions available to them.