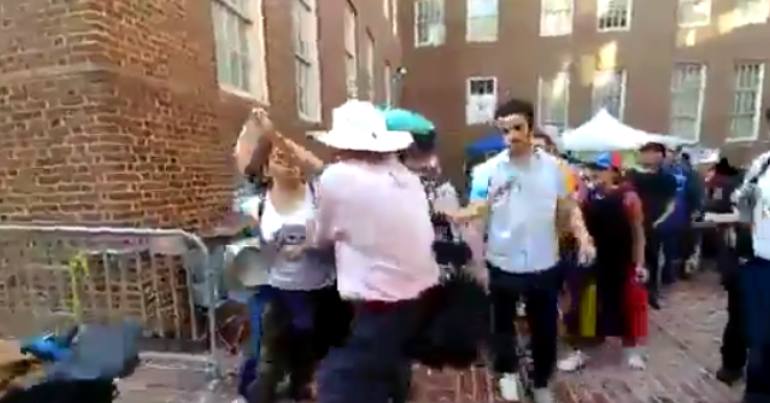 As The Canary previously reported, the Venezuelan embassy in Washington is currently under siege by coup supporters. Peace activists of the Embassy Protection Collective have been living inside since the last remaining diplomatic staff left last month. But now, coup backers have sought to smear these activists with a misleading video.

Anti-war group CODEPINK has been leading efforts to support the embassy activists. On 30 April, supporters of US-backed Venezuelan coup leader Juan Guaidó came to protest its presence. They have repeatedly attempted to gain entry to the building in spite of the activists being there legally as guests of the rightful tenants, according to international law and the Vienna Convention. So far, they have not succeeded. But as time has passed, they’ve been resorting to increasingly desperate and aggressive tactics. In addition to hurling racist, homophobic and sexist abuse at the activists and their supporters, there have also been reports of physical assaults against anti-coup activists.

Guaidó supporters have also been trying to starve the activists out by blockading the embassy’s entrances to deny access to food and other supplies from people on the outside.

The US is doing to the Embassy Protection Collective (cutting off food, water, & electricity) what they are doing to the country of #Venezuela. #SanctionsKill

BREAKING: @SecretService and DC authorities have turned off water and electricity to activists–DC residents–besieged inside the Venezuelan embassy in the Georgetown neighborhood. This is a dangerous situation and totally illegal

In recent days, meanwhile, pro-coup demonstrators have sought to gain public support with a smear based on a dishonestly manipulated video.

On 3 May, a pregnant coup supporter posted a video. She claimed it showed an anti-coup activist (whom she falsely called a member of CODEPINK) assaulting her:

Today I was attacked by a member of @Codepink. I'm 27 weeks pregnant and he knew that but he did not care. #OperacionLiberdad #OperationLibertyDC pic.twitter.com/gvCwaavFnn

The video spread far and wide, receiving hundreds of comments from fellow coup supporters. Guaidó’s self-proclaimed ‘US ambassador’ Carlos Vecchio also shared it. He described the activists as “squatters sponsored by illegitimate regime” and “violent people capable of attacking a pregnant woman”. And he called for US authorities to back their eviction.

But what took place in the video has been completely misrepresented. Because the man in question didn’t attack anyone. He was simply trying to get into the embassy to provide those inside with toothbrushes he had purchased for them; but he was aggressively blocked by Umaña and other Guaidó supporters. It also turns out that he is a disabled senior citizen who suffers from severe spinal stenosis – and is therefore not even capable of harming anyone in the first place. Speaking to The Canary, the man (who prefers not to be named for legal reasons) said:

This was a humanitarian gesture to the people in the embassy. I’m a former health professional and feel adamant about the health of my comrades inside, some of whom are elderly and are at risk because of the siege.

He added that he has no record of any involvement in violence or even civil disobedience.

For a better impression of what happened, it’s necessary to watch the full video, which another coup supporter had shared hours earlier:

Watching the whole video, it’s clear that the man had been walking toward another rear entrance (up a flight of stairs), but that coup supporters had been chasing and harassing him. He then turned back to try and get in via a different entrance. But pro-coup protesters blocked this entrance with their bodies. In this context, he tried to squeeze through the entrance past two female demonstrators (one of which was apparently Umaña). To stop him getting through, they actively moved in tight to block his entry. In short, it was they who got in his way rather than him targeting them for an ‘attack’.

The edited snippet of the video, however, doesn’t provide this context. Instead, it seeks to smear an elderly man and an entire peace group via dishonest manipulation.

The man targeted by the smear is legally allowed into the embassy as a guest of the rightful tenants under international law – the embassy officials of the elected Venezuelan government. The pro-coup demonstrators were the aggressors in this situation, and were breaking the law by denying him entry.

In spite of this, the secret service police (Washington’s law enforcement department responsible for policing embassies) has been taking a brazenly partisan stance in favor of the coup supporters throughout the ordeal. And rather than arrest the Guaidó supporters who blocked the man’s entry, they violently tackled him to the ground, pinned him down, and arrested him. He says that ever since he has been suffering from severe pain in his upper abdomen. The Canary understands that he has been charged with two counts of attempted assault.

The secret service bias is nothing new, though. They have already been reportedly complicit with blocking the delivery of food and other supplies to the activists inside the embassy. Journalist Max Blumenthal has provided extensive on-the-ground reporting that documents this reality. Fellow journalist Alex Rubinstein, meanwhile, has documented a case of the secret service police failing to arrest a pro-coup demonstrator who allegedly assaulted an anti-coup activist:

WATCH: Escualidos attack and choke a supporter of the Embassy Protection Collective trying to deliver food. The Secret Service REFUSED to arrest the assailant pic.twitter.com/xVzHd2i4Hk

Speaking to The Canary, Rubinstein (who is currently inside the embassy) pointed out the stark contrast between the police response to the two events above. While they were quick to violently pin down and arrest the man who tried (legally) to enter the rear entrance of the embassy, they took no action against the Guaidó supporter who attacked an anti-coup activist. Popular Resistance’s Kevin Zeese, who is also inside the embassy, told The Canary:

We have seen the [secret service] police allow the violent [pro-Guaidó] opposition to assault members of the collective and its supporters. What we have seen is them doing the opposite of what they are supposed to. In some cases, rather than arrest the perpetrator of the assaults, they have been arresting the victim and letting the attacker go free.

Another video reportedly shows just how the police have been treating peace activists:

Another view of the @SecretService bashing @VFPNational National President Gerry Condon's face into the ground before arresting him.

Trying to throw a single cucumber up to the Embassy Protection Collective. #HandsOffVenezuela @RealAlexRubi @anyaparampil pic.twitter.com/4BX4gnO5tY

The pro-coup demonstrators orchestrating this siege seem willing not only to engage in violence, but also in dishonesty to try and discredit the embassy protectors.

And as Guaidó openly talks of a possible US military intervention to topple the elected Venezuelan government, it becomes all the more important to call his supporters out when they smear peace activists who are simply fighting for respect for international law.