US troops set to leave Afghanistan. That's one down, another 150 or so countries to go. - Canary 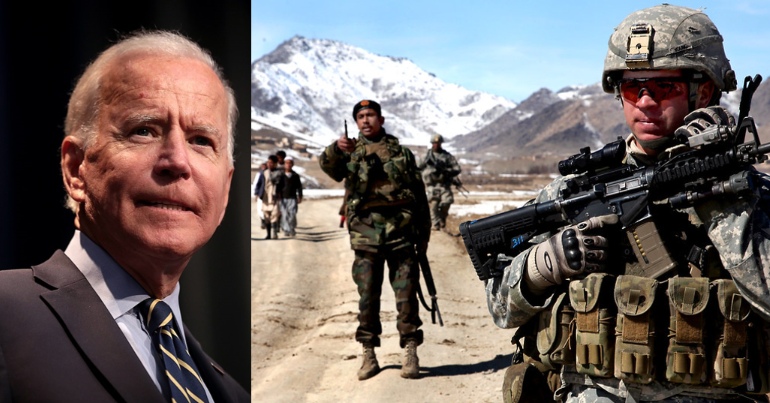 US president Joe Biden recently announced his administration will pull troops out of Afghanistan. This brutal war has cost tens of thousands of lives and plunged the country into a protracted conflict. Additionally, it failed to break the Taliban’s power or bring ‘democracy’ to this Middle Eastern country. Rather, the Taliban is stronger than ever and the government in Kabul is a US puppet with problems of its own. If ever there was a case of futile and pointless war, this is it. And it serves as a prime example of western intervention making a bad situation worse.

Furthermore, though Biden’s decision to withdraw should be welcomed, we must be vigilant about whether a proxy force will remain. At the same time we also need to remember that, even if every last US troop goes home, this would still be a small drop in the ocean. The US global military presence isn’t confined to Afghanistan or the Middle East.

Bringing a seemingly endless war to a belated end

On April 14, Biden announced that the US will withdraw troops from Afghanistan before 11 September, 2021 – the 20 year anniversary of the 9/11 attacks in 2001. This in fact actually extends an earlier deadline of 1 May 2021, set by president Donald Trump. Nonetheless, some are lauding the move as an end to a seemingly endless war.

The US has had a military presence in Afghanistan since it invaded in October 2001. And since then, the Afghan war has become the longest lasting war in US history. At the time, the administration of president George W. Bush claimed the country’s Taliban government had given shelter to 9/11’s probable mastermind Osama bin Laden. He was later assassinated by the US military and never faced trial.

Huge costs in both blood and money…

The costs, both financial and in terms of human life, have been devastating. Over 2,000 US soldiers and over 400 British soldiers (as of 2015) have been killed throughout the conflict. The cost for the local Afghan population, however, has been much, much worse. The United Nations Assistance Mission in Afghanistan (UNAMA) has documented “nearly 111,000 Afghan civilian casualties, including more than 35,500 deaths, since [UNAMA] began documenting the civilian harm in 2009”.

Meanwhile, according to data from the US Department of Defense, the cost of the war from October 2001 until September 2019 is $778bn. And it has almost certainly risen since then. This is money the US could have spent on domestic public investment. Because unlike most other OECD countries, the US still fails to provide universal public healthcare to all its citizens.

…and all for nothing

In a cruel irony, despite this huge spending, the war has arguably not been a ‘military success’ on its own narrow terms. While the US did topple the Taliban-led government, it remained a potent force. Because it launched a concerted guerrilla insurgency against the US military presence. And in any case, the US removed the Taliban only to install a US-friendly puppet government in Kabul. One with generous financial and military support from Washington that has problems of its own.

In a tacit admission that the US cannot defeat the insurgency, the Trump administration sent a special envoy in 2018 to initiate peace talks with Taliban leaders. The latter only participated because Trump indicated a complete withdrawal of US troops was on the table. It subsequently entered into dialogue with the Afghan government in 2020. But, according to the Council on Foreign Relations (CFR), “little progress has been made”. CFR adds that:

Experts say the Taliban is stronger now than at any point since 2001. With up to eighty-five thousand full-time fighters, it controls one-fifth of the country and continues to launch attacks.

The Taliban aren’t the good guys, but nor are the US or its puppet government

Given its oppressive politics, the prospect of the Taliban regaining power would be nothing to celebrate. But its strength is a raw fact of life. The alternative is a continuation of the conflict and even further bloodshed and destabilization. Moreover, the US-backed government itself is hardly a paragon of progressivism itself. It has been credibly accused of being fundamentalist and filled with warlords.

In any case, secular societal progress toward greater democracy, human rights, and pluralism is very rarely successfully imposed by an invading, occupying force. And as The Canary has extensively reported, the US hardly bases its foreign policy on such considerations in the first place. It’s focus is securing its own economic interests and those of the multinational corporations that increasingly control its government.

What about local voices?

For example, the SPA support improving women’s rights and women’s access to education and implementing a program of land reform. And far from supporting the US occupation and its puppet government, the SPA has boycotted several of the last parliamentary elections in Afghanistan on the basis that no candidates can be elected without the support of the US.

In any rational world, US troops would never have been sent there in the first place. Now, cutting the losses and bringing an end to the conflict seems not just rational but long overdue. But we need to put things into perspective.

Afghanistan is just one victim of US aggression among many

Firstly, there’s the risk the US will withdraw its military only to leave behind a shadow force made up of private military companies. Companies such as the infamous Blackwater. As the New York Times has argued:

Instead of declared troops in Afghanistan, the United States will most likely rely on a shadowy combination of clandestine Special Operations forces, Pentagon contractors and covert intelligence operatives to find and attack the most dangerous Qaeda or Islamic State threats, current and former American officials said.

Secondly, it’s worth remembering that even if a full US withdrawal happens, it would just be a small first step in ending the US’s global meddling. In addition to Afghanistan, the US has troops stationed in over 150 other countries. It also has about 800 military bases scattered across the planet.

Clearly then, even supposing Biden follows through on his promise – and it’s no sure thing for an establishment Democrat with a long history of upholding the bipartisan status quo of US foreign intervention – we will still have a long road ahead in the fight for a more peaceful world free from US imperialism and foreign aggression.