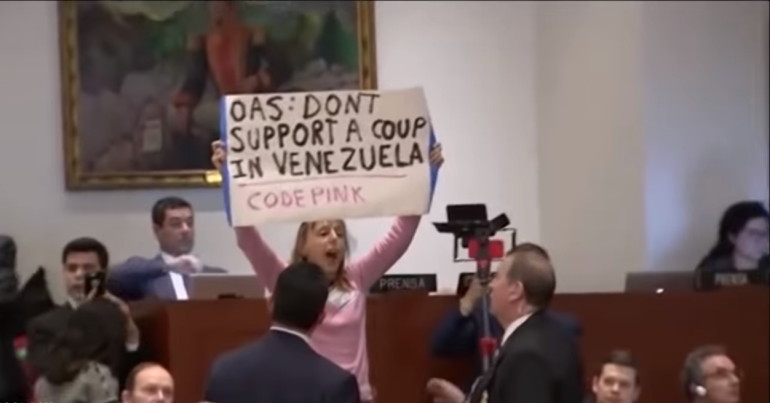 Medea Benjamin is a central figure in the US peace movement. In 2002, she co-founded women-led peace group CODEPINK in an effort to prevent the invasion of Iraq. Most recently, CODEPINK has been a vital force in confronting US intervention in Venezuela. As well as disrupting high-profile meetings and organising protests, the group is currently occupying the Venezuelan embassy in Washington DC to stop an illegitimate takeover by the Venezuelan opposition.

Benjamin spoke exclusively to The Canary about how recent intervention in Venezuela brings to mind the lead-up to the invasion of Iraq, how to break through the mainstream media’s information barrier, and why international solidarity is so important.

“We all know how Iraq turned out”

The Canary asked if Benjamin saw parallels between the lead-up to the invasion of Iraq and what’s currently going on in Venezuela. She said:

We certainly see parallels around the use of economic sanctions and how they are used to devastate the population and hurt ordinary people and make them opposed to their own government.

And we see the parallels about the constant drum-beat for the need to overthrow a government – certainly [former Iraqi leader] Saddam Hussein was not a pleasant leader and there are problems with [Venezuelan president] Nicolás Maduro, but to paint Maduro as this cruel dictator is certainly part of the whole propaganda effort.

And we all know how Iraq turned out… It’s almost 20 years now that Iraq has suffered the intervention – and it still hasn’t healed. And we just look in horror not only with what is happening now in Venezuela but what could happen.

“There is so much arrogance and flying testosterone”

Senior US officials – John Bolton, Mike Pompeo, Elliott Abrams, and president Donald Trump – seem now to be threatening the Venezuelan government on a daily basis. With this in mind, The Canary asked Benjamin what she thought of their endless macho statements, and how problems of excessive masculinity feature in US military aggression. She explained:

With Bolton, Pompeo and Abrams, there is so much arrogance and flying testosterone and just hubris – imperial hubris – that it is hard to even listen to these people. They feel like they own the world.

It was so funny listening to Bolton talk yesterday about Cuba and say ‘we will not allow foreign interference in our nations’, and then he says in the next breath: ‘the Monroe doctrine [warning European powers against acting in the Western hemisphere without US approval] is alive and well’. So it’s almost as if they’re trying to pretend that the US is just one more friendly nation in the Americas.

I think it’s good you bring this issue of excessive masculinity because it’s so evident in the way that the US is working right now – and let’s also add that these are white men that think that the white male race is superior and that they have not just the ability but responsibility to determine who rules in other countries.

Breaking through the corporate media propaganda

Like in past cases of Western intervention, there’s a grave problem with the corporate media’s representation of Venezuela. The Canary asked Benjamin if just breaking through the information barrier is the first step to successful resistance to US intervention. She said:

It’s very hard to break through the mainstream media. They have already created the narrative that ‘Venezuela is a failed state’ – that ‘Maduro is a dictator’; that so many people inside the country ‘want the US to intervene’; that the US is ‘doing this for humanitarian reasons’.

I think one thing that of course is on the side of changing the narrative is that their plans aren’t working – the Venezuelan military’s not divided; the demonstrations get smaller for the Venezuelan opposition; the humanitarian aid narrative is breaking down with the Red Cross now working with the Maduro government.

And as time goes on, people are starting to question whether the Trump administration’s narrative is the only one. And it allows us to start injecting some reality into the situation: saying that there are millions of people that actually support this government, and millions more that don’t support the government but don’t want US military intervention either.

What’s wrong with discussion? And isn’t it way better than a civil war?

The Canary recently spent three weeks in Venezuela. As time went by, it became increasingly evident that the economic situation was making day-to-day life more difficult for ordinary Venezuelans. This is, in no small part, a direct result of brutal US economic sanctions. Benjamin continued by talking about the importance of international solidarity to resist external pressure on Venezuela:

It’s so sad to see the US using the humanitarian crisis as an excuse for trying to overthrow the government at the same time as it is imposing these onerous sanctions to make people’s lives more difficult. And that’s why we need the international community to say not only ‘no to intervention’, but also to oppose the economic sanctions.

The US is using economic sanctions now as a kind of terrorism: I saw that recently in Iran where I just returned; I see it now with the US imposing new restrictions on Cuba; and certainly we see it in the case of Venezuela. The global community has to stand up against the bully of the US flinging around its economic might in opposition to international law, humanitarian concerns, and to the concerns of US allies like the European countries – that unfortunately, their governments have been all too meek going along with the US administration.

I think we have to up international solidarity throughout Latin America, throughout Europe, and throughout the US and Canada.

The Canary asked which forms of solidarity CODEPINK has found most effective. Benjamin continued:

Well to be honest I’m very frustrated at our own inability to create a larger movement. It’s really sad that the US can get away with what it’s been doing and that we can’t get thousands of people out on the street. It’s been very frustrating not to build a large movement and I don’t think anything we’ve done so far has been effective enough.

More than anything else, Venezuelan social organisation seems to have been the greatest impediment to US intervention succeeding in its aims. Benjamin said:

It is certainly the resistance inside Venezuela that has been the most effective. But for us to build, we need to do everything. We have to have more protests and get more people out to them. We have to do more confronting our members of congress to make them stronger in their opposition to the Trump administration.

Benjamin concluded by talking about CODEPINK’s current 24/7 vigil in the Venezuelan embassy:

It’s quite astounding that, while Maduro… is recognised at the UN as the president of Venezuela, the US is giving over Venezuelan government properties to the opposition. They already took over the Venezuelan consulate in New York City. They took over the military attache building in Washington DC. And they have announced that they want to take over the embassy.

And we are saying: what about international law? What gives a self-proclaimed president the right to take over the properties that belong to the government in power?

We have to get more people supporting this very exciting 24/7 vigil that we’ve been holding in the Venezuelan embassy, which is a place for people to show their solidarity every day and to try to prevent the Venezuelan opposition from illegally taking over an embassy that doesn’t belong to them.

Many Venezuelans are resisting the Trump administration’s attempts to topple their government through economic terror and military threats. But as the economic situation becomes more difficult, it’s becoming clear that they can’t do it alone. For this reason, international solidarity is absolutely crucial. So anyone concerned about Western intervention in Venezuela should consider supporting their nearest international solidarity group.