'A Brexmas Carol' Part Four: Ebetheresa is delivered a terrifying vision of the future... - Canary 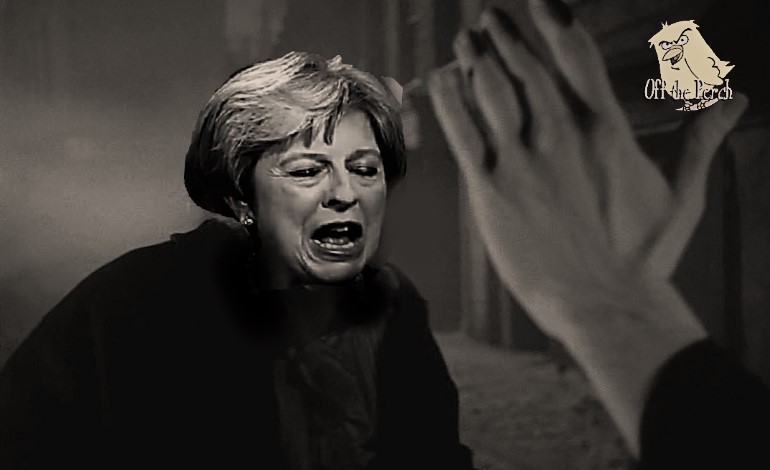 As, dear reader, we previously presented to you, Ebetheresa Scrooge has just been tormented by visions of her younger life, at the hands of the Ghost of Christmas Past. And now, a second spectre has visited her…

“Good evening, Ebetheresa! ‘Tis I! The Ghost of Christmas Present! Now then. Let’s get proceedings underway with a glass of that Laphroaig I know you’ve got hidden under your bedpan!”

Clarke physically looked just as he always had to Scrooge: a scarlet face like a balloon fit to burst; several beads of sweat permanently on his upper lip and the distinct, sweet odour of alcohol past its best. She was pondering where his overly dry cleaned, dull-as-ditchwater suit had gone when Clarke suddenly bellowed “Touch ME! Touch my glistening robe down nether!”

“Look, Ken,” admonished Scrooge, “We’ve had all this, already, with the sex-pest sca…”

“Touch it, NOW!” bellowed an interrupting Clarke, and Scrooge dutifully obliged, trembling at the thought of her hand near Ken’s groin. What would dear, bin-emptying Philip think?

Suddenly, the pair were transported to Scrooge’s aide, Toby “Toadmeister” Young’s modest home. In the Royal Borough of Kensington and Chelsea.

And hiding in the corner of Young’s meagre drawing room was the figure of Tiny Tarquin. A tear came to Scrooge’s eye, for she knew the boy was sick with gluten intolerance.

Clarke suddenly bellowed “Who said this, Scrooge? ‘If he be like to die, he had better do it, and decrease the surplus population.'”

Scrooge hung her head to hear her own words quoted by the Spirit and was overcome with penitence and grief. But little time had she to ponder on his words, as he was suddenly back in her bedroom. “Ken…? Ken…? Where art thou? I wanted to see more!”

But suddenly, she noticed the clock tick over to midnight. And she felt an icy blast shoot up her back as if Iain Duncan Smith had entered the room.

It WAS Iain Duncan Smith.

“Iain…?” quaked Scrooge. The spirit, cloaked in black like the harbinger of death itself, did not reply.

The final part of ‘A Brexmas Carol’ is out on Saturday 23 December. You can read Part One here, Part Two here and Part Three here.