‘Anna we will fight on’. A personal account of resisting the DSEI arms fair. - Canary 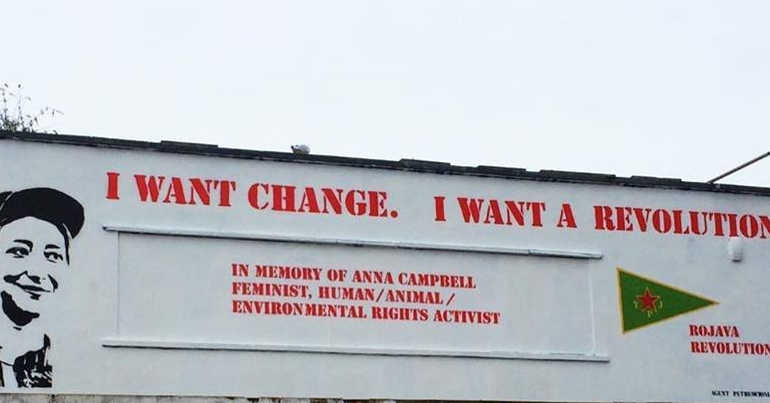 “Anna we will fight on” chants my friend as we row our boat towards the warships across the dock. “Jin, Jiyan, Azadi”, meaning “Women, Life, Freedom”, a Kurdish feminist revolutionary chant.

I wave a flag emblazoned with the words ‘Defend Rojava’.

We’ve launched an inflatable canoe from the Royal Victoria Docks and are rowing toward the ExCeL centre, where the DSEI arms fair is taking place. DSEI is the biggest arms exhibition in the world. Our action is timed to disrupt a military boat display by BAE Systems.

Days before, me and my group of friends had joined a #RiseUp4Rojava day of action at DSEI. I was wrestled to the ground and arrested as we marched into the road leading to the ExCeL centre. My comrades locked themselves in front of the trucks that were trying to get into the ExCeL to set up the military exhibits inside.

Many of my little group knew Anna Campbell. And we wanted to remember her in our actions. Before we leave for the protests my comrade plays a song that reminds her of Anna.

‘Anna we will fight on’

At previous actions against the arms trade, I stood with my friend Anna. We protested together outside the EDO arms factory in Brighton. Demonstrating against the manufacture of arms to be used in devastating imperialist wars around the globe. We travelled to Manston in Kent where Anna and two other women scaled an airport building to hang a banner. The action was planned to stop Israeli arms company Elbit from being given permission to open a factory there. After the protests, the local council disallowed Elbit’s application.

Our statement released to the local press stated that Elbit: “not only makes drones used by Israel to oppress Palestinians, but it also sells to the regimes in Turkey and Saudi Arabia, both known to have supported ISIS either financially or militarily“.

We both stood our ground alongside fellow anti-fascists one day in Dover, as the National Front lobbed bricks at us. The Front was trying to hold a racist march through the city.

Arms deals to fuel the crushing of a revolution

My comrades and I also joined the week of action against the DSEI arms fair in 2015. Protesting as the tanks and warships rolled into the ExCeL centre. As we took part in the resistance against DSEI, Turkey was carrying out a massacre against the Kurdish majority communities within its borders. Inside the ExCeL centre in London, Turkish arms manufacturer Roketsan was signing a deal for the manufacture of missiles.

In Kurdistan, a revolution was going on that the Turkish state wanted to destroy. A revolution based on the values of direct democracy, women’s freedom and a collective ecological society.

Anna made her way to Rojava, the region of Kurdistan that lies within the borders of Northern Syria, to join the revolution taking place there. She went there to do the same as she had been doing in Britain. To stand against militarism and fascism. To stand for a different kind of society.

Turkey invaded Rojava’s Afrin region in 2018, and Anna decided to join the Women’s Protection Units’ (YPJ) armed resistance against the invasion. She was killed by a Turkish missile strike in March 2018. One of Anna’s friends wrote at the time:

Hêlîn was a revolutionary. Hêlîn was an anarchist. But, above all, she was a free woman.

Hêlîn was the name that Anna used while she was in Rojava. It means ‘nest’.

So we dedicated our small actions against the arms fair to Anna. To our other friends who have been killed and injured as a result of the global arms trade that DSEI represents. And to the countless others whose names we don’t know, but whose suffering we can feel.

Protest is not enough

Protests and direct actions like those that took place against DSEI are important. They are a way to show that we will not stand idly by while weapons are sold in London to kill our comrades. Concerted direct action can force governments and corporations to change certain policies. Mass protests have led to the cancellation of several UK arms fairs.

But if we want to fundamentally change society, we will need more than reactive actions. We need ideas that pose an alternative to the unequal, capitalist society we live in. A society which puts the pursuit of profit and the protection of power above all other things. I like to think that one of the reasons Anna travelled to Rojava was in search of those ideas. In search of inspiration to create revolution at home.

‘Any dream that doesn’t encompass the world is too small’

A friend recently sent me this quote from the Zapatista indigenous revolutionary movement in Chiapas, Mexico. The quote comes from a statement made by the movement after it took control of more territory earlier this summer. In it the Zapatistas describe the role their comrades, who have included internationalists from all over the world, have played in their over 25-year struggle:

Thanks to you our imagination, creativity, and knowledge expanded and became more universal – in other words, more human. We learned to look, listen, and speak otherness without derision, without standing in judgement, and without labels. We learned that any dream that doesn’t encompass the world is too small a dream.

The battle against Daesh (ISIS/ISIL) in Syria was won because of the struggle of the revolutionary movement in Rojava. That struggle has been joined by hundreds, maybe thousands, of internationalist revolutionaries like Anna.

But the fight joined by Anna and the other internationalists in Rojava hasn’t only been about Kurdistan or defeating Daesh. It can show the way toward a new era of international struggle. A struggle to change our own societies. A struggle to create a truly democratic and free society that can exist in harmony with nature.

To create that society we need more than protests and direct action. More than a collection of ecological, anti-war and anti-capitalist campaigns.

Peoples’ democracy that can outgrow the state

We need to begin to see ourselves as part of one coherent movement for holistic change in society. One that is ambitious, takes itself seriously, and allows space for developing ideas of how we will create change. Ideas that can overcome the dominant narratives of our capitalist society and inspire a movement to create a real peoples’ democracy. One strong enough to outgrow the sham democracy of the state.

We need a movement that rejects hierarchy, capitalism, patriarchy, states and borders and embraces ecology and internationalism.

A movement that dares to dream, plan and strategise for a democracy that isn’t contained by the walls of Westminster. One that we can build slowly and surely from the bottom up. Drawing inspiration from Kurdistan, Chiapas and beyond.

Only then can we realise our full potential and hope to build the world that Anna fought for.