As Boris Johnson hosts Viktor Orbán, we now know who the real antisemite is - Canary 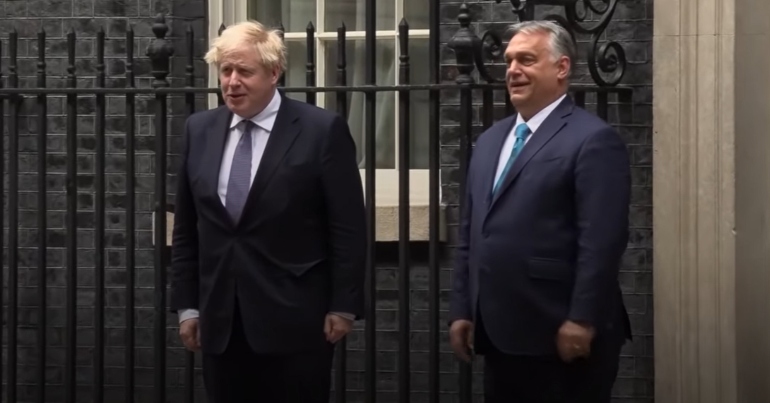 Throughout his time as Labour leader, Jeremy Corbyn was subjected to a vicious, politically motivated smear campaign. This was based in large part on the claim that Labour had seen a dramatic increase in antisemitism amongst its membership during Corbyn’s leadership.

However, as The Canary has previously argued, of the respective leaders of the UK’s two major political parties during the 2019 general election, it was in fact Boris Johnson that had far more to answer for in terms of antisemitism. Now, that reality has been confirmed by Johnson’s latest guest at Downing Street. And this, in turn, raises the question of whether Jeremy Corbyn should be given another chance to face Johnson at the next general election.

A member of the new Eurofascist movement

On 28 May, Hungarian prime minister Viktor Orbán arrived in London to meet with the British PM. The visit was ostensibly to discuss UK-Hungary relations following the UK’s exit from the European Union. Government ministers have defended the meeting as a legitimate exercise in relationship-building following Brexit. Business secretary Kwasi Kwarteng, for example, described it as “completely reasonable”.

But others have been quick to point out that hosting Orbán lends credibility to his far-right agenda and controversial stances. In particular, his characterization of migrants as “a poison” and comments about so-called “Muslim invaders” have drawn criticism. Orbán has been widely characterized as far-right. And along with other Eastern European leaders such as Poland’s Mateusz Morawiecki, he’s part of an emerging ultra-nationalist political trend that arguably borders on fascism.

But from a UK perspective, Orbán’s most salient characteristic is his well-documented antisemitism. According to Politico, during Hungary’s 2017 parliamentary elections Orbán “promoted anti-Semitic imagery of powerful Jewish financiers scheming to control the world”. It added that his government’s “anti-migrant rhetoric endangers all minorities, including Jews, and its comparisons with the 1930s are unmistakable”. Orbán has also been accused of attempting to minimize Hungary’s role in the Nazi Holocaust.

The fact that the Conservatives are presumably willing to overlook all of this reveals how their and their backers’ charge of antisemitism against Corbyn was a cynical ploy all along. After all, if Corbyn had met with an actual antisemite, we would have never heard the end of it. But because of the UK media’s well-documented right-wing slant, Johnson largely gets a free pass.

Part of a long history

And it’s far form the first time he has either. As The Canary has previously reported, before becoming prime minister Johnson wrote a novel with some suspiciously antisemitic tropes. He was also part of a group of MPs who were present at the unveiling of a statue of Nancy Astor. Astor was an MP who openly held antisemitic beliefs.

Clearly, this is another flagrant example of the double standards the UK media and establishment apply to political figures according to their ideological orientation. As academic Norman Finkelstein explained to The Canary in an exclusive interview in 2019:

British elites suddenly discovered ‘we can use the antisemitism card in order to try to stifle genuine… leftist insurgencies among the population’. And so what used to be a kind of sectarian issue waged by Jewish organisations faithful to the party line emanating from Israel vs critics of Israel, now it’s no longer sectarian because the whole British elite has decided they’re going to use this antisemitism card to stop Jeremy Corbyn and the political insurgency he represents.

Perhaps it’s time the Labour membership came to terms with the fact that the 2019 election wasn’t a clean fight. And that Corbyn should be reinstated as Labour leader.