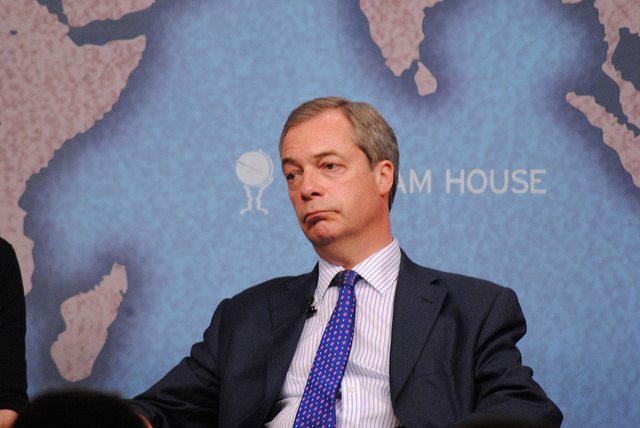 Having raked in some £3 million in funding in the first quarter of this year, the UK Independence Party is understood to have raised just £200,000 in the three months after the General Election, and has lost a number of key (read: ‘rich’) backers. The party is therefore in mounting financial difficulties.

Party membership, which had grown markedly since around 2010 to reach a high point of around 47,000 early in 2015, has slumped by roughly one quarter, depriving the coffers of approximately £300,000, at the same time as a variety of unexpected bills have landed on the door-mat of UKIP’s head office. This reportedly includes an invoice for £80,000 from Facebook for promotion of UKIP’s campaign in the election. UKIP staff are occasionally going unpaid, and leader Nigel Farage is now hunting around for new donors to keep the party afloat financially.

It is the latest chapter in a half-year of frustration for Britain’s most-exposed anti-European Union party.  In terms of the total number of votes received in the election, UKIP has claimed to be the third-largest party in the country, but the final outcome was just one seat in the House of Commons. It made a brutal disappointment for Farage, at the end of an election into which the party had in fact brought two seats due to defections from the Conservative Party. There has been very little for UKIP to smile about in the six months since, what with the financial shortfall, haemorrhaging membership, and occasional infighting between two of its most high-profile figures.

Given the high demographic of older people in UKIP’s support base, the problem of declining support and declining donations was always going to hit the party harder than most, and sooner than most; as people reach retirement age, it can become difficult for them to keep donating money to a political party, and the ‘Euro-sceptic’ stance of UKIP has never held much appeal to younger generations. But even so, the speed at which UKIP’s finances have crashed has been startling, suggesting the party had tried to punch too far above its weight during the election, and was too dependent on one or two very rich donors who have since invested their money elsewhere.

What does this mean for everyone else?

To people on the left of the British political spectrum, this turmoil in a far right party like UKIP is bound to cause a few cheerful smirks. Given a substantial number of disillusioned Labour voters, paradoxically, seemed to switch their allegiance to UKIP during the election, and may now reverse that journey – especially with the re-emergence of the ‘real left’ in the shape of Jeremy Corbyn – there is some practical value in it too. But it is not all good news for the left.

There is a substantial variety of small parties on the far right of the political spectrum in the UK, of which UKIP is the largest. There are also the British National Party (BNP), the National Front (NF), the New Dawn Party, Britain First (BF), the English Democratic Party (EDP), and the English Democrats (not the same as the EDP), among others.

In short, such is the divisive nature of extremism that the far right is largely made up of groups and individuals who cannot compromise on anything, even when talking to similar-minded groups and individuals, and this has led to the fragmentation of the fringe. While many people would despair at the thought of there being so many groups on the extreme right of the spectrum, this is in fact the fringe’s greatest weakness; the number of different parties on this extreme reflects the disunity that plagues it. The more parties there are, the more shades of opinion people, even with broadly similar views, can be divided from each other by. Thus, the vote for the far right tends to get divided up in much the same way, stopping any of the parties from getting much of a foothold in government, either nationally or locally.

UKIP had seriously threatened to break that mould, although as much by siphoning extra support from disillusioned leftists as from other right-wing groups. A decline in support for UKIP would therefore be a good thing for the left, but the total dissolution of UKIP would not, as it would reduce the range of parties that supporters of the far right can be divided across. Another extremist party such as the BNP could then absorb much of the dislocated UKIP support, bolstering the support it already had, and the worrying trend of ‘fashionable UKIP-ism’ of the last five years or so could end up repeating itself with the BNP.

So the troubles in UKIP are interesting news, and amusing news. But they are not entirely good news.