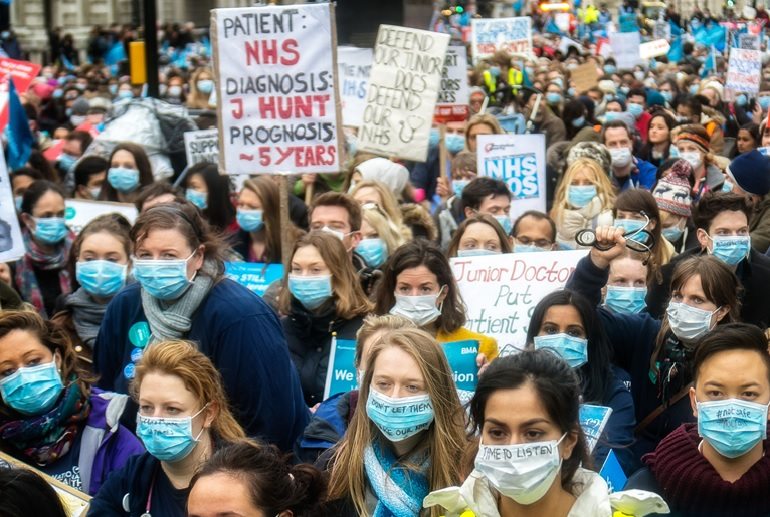 Almost two weeks after Health Secretary Jeremy Hunt chose to impose a dangerous and unpopular new contract on junior doctors, new action aimed at resisting his plans has been announced. The British Medical Association (BMA) has now promised three new 48-hour strikes will take place. But that’s not the only way it will challenge the Conservative government’s anti-democratic measures.

Immediately after Hunt’s decision to impose the new contract on the junior doctors, the BMA promised to “consider all options”. The first option the union has decided on is industrial action. The three future strikes announced on 23 February will occur on 9 March, 6 April and 26 April, beginning at 8am on each day.

The BMA has also chosen to take legal action. It will launch an official challenge asserting that the government has failed to perform an adequate “equalities impact assessment” before opting to impose the new contract. Under the Equality Act 2010, politicians must show “due regard” to equalities issues, looking at whether access to services would be undermined by a change in policy, for example.

We have already seen NHS chief executives refusing to support an imposition, and patient representatives have said they are appalled by this move. Added to this, the government’s former adviser on patient safety, Don Berwick, has said it should apologise to junior doctors over the contract dispute. The government must listen to the chorus of concern coming from all quarters and reconsider this disastrous approach.

He also offers Jeremy Hunt a way out, saying:

The government can avert this action by re-entering talks with the BMA and addressing the outstanding issues and concerns junior doctors have, rather than simply ignoring them… The government must put patients before politics, get back around the table and find a negotiated solution to this dispute.

There are many measures required to save and protect the NHS, and scrapping the currently proposed junior doctor contract is just one of them. As The Canary has reported: the Health and Social Care Act needs to be repealed; PFI needs to be abolished; privatisation needs to stop; the NHS needs proper funding; and the voices of healthcare professionals must be heard and respected.

But the immediate issue at hand is the new junior doctors’ contract. And if the government does not backtrack on its decision to impose the contract, further strike action will definitely go ahead.

As during the previous stoppages, emergency care will still be provided. But the fact remains that Jeremy Hunt has shown incredibly immature and irresponsible behaviour when dealing with junior doctors. By choosing to hide from junior doctors rather than negotiate with them, he has made a further escalation of the dispute inevitable.

-Ask Jeremy Hunt on Twitter to scrap the new junior doctors’ contract and sign this official petition against it.

-Support the campaign to prevent the Transatlantic Trade and Investment Partnership (TTIP), a treaty that will open the NHS up to total privatisation.

-Assist 38degrees in its campaign to mobilise support for public healthcare.