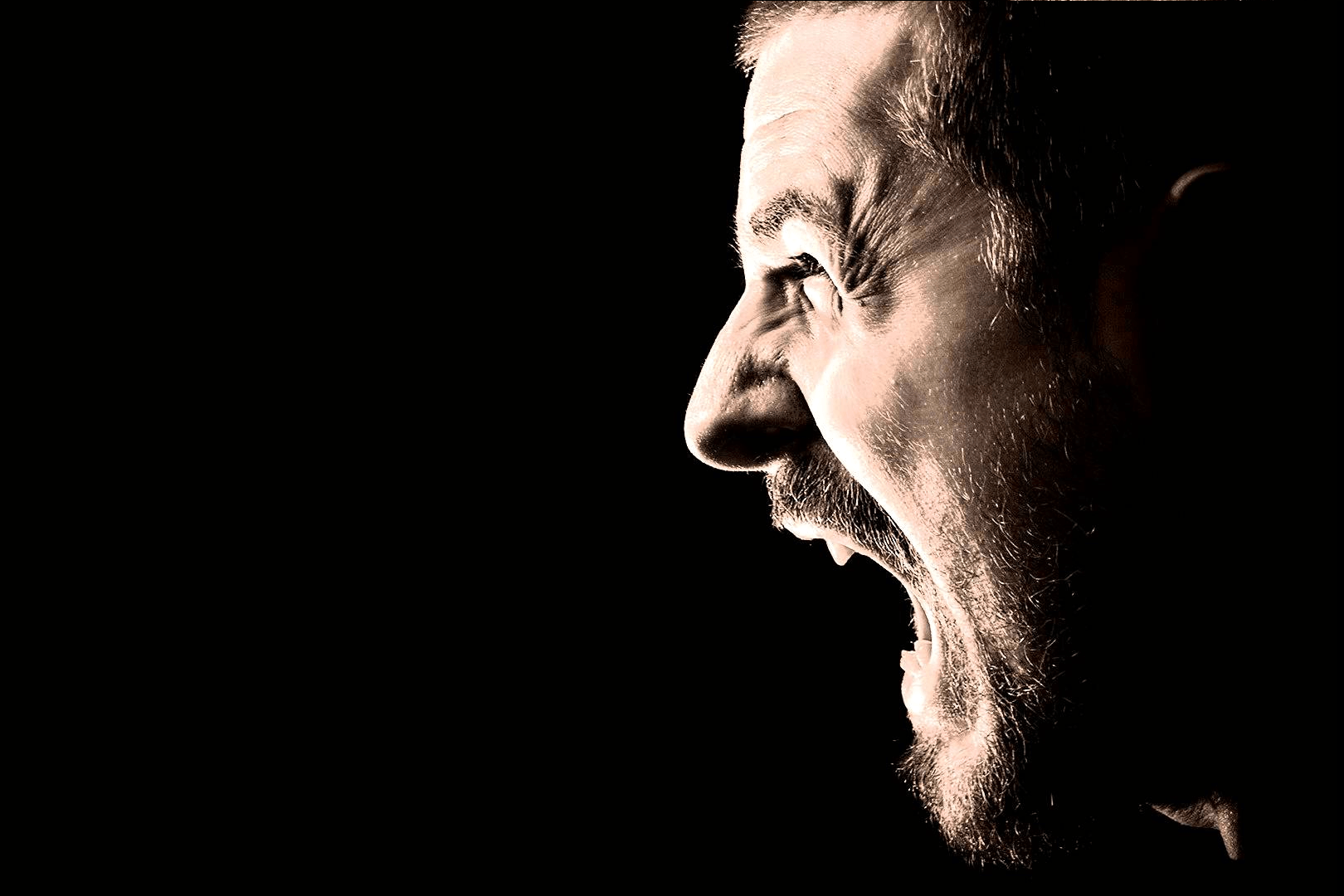 The household tabloid the Daily Star has forecast a zombie apocalypse at the hands of ISIS (Daesh), highlighting the ridiculous fearmongering by the media: 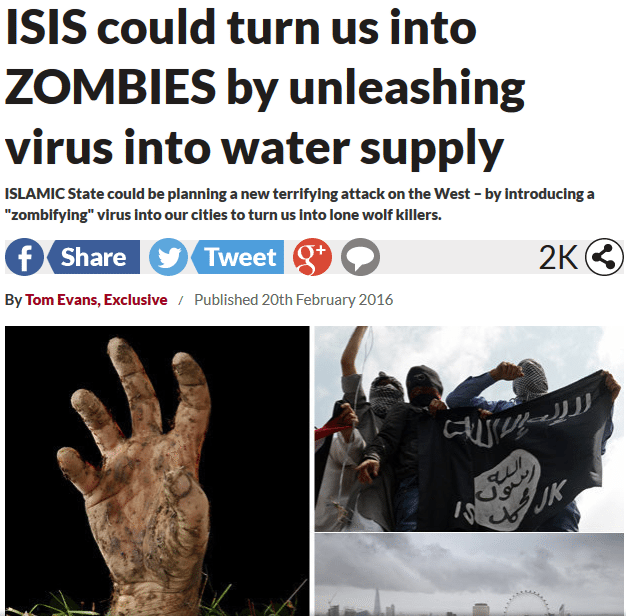 In a laughable attempt to substantiate their story, they cite Dr Arnold T. Blumberg:

The spread of a virus that could depersonalise human beings into rabid killers is conceivable.

In the epitome of blowing Daesh out of proportion, the Daily Star presents the argument that because such an idea is “conceivable” it is worth reporting on. By that logic, we could write the story: ‘ISIS could be farming cows that produce toxic milk to poison your cheddar’. That is conceivable, too.

Blumberg teaches pop culture college courses and is known as the ‘Doctor of the Dead’. The distinction between Blumberg’s fiction and the non-fiction of Daesh is apparently irrelevant to the article.

The Daily Star’s piece is a more striking example of the mainstream media, in the west, losing the plot over Daesh. However, what seems to be irrelevant to the general coverage on Daesh that we consume daily, is the wider context and the facts that are obscured in the process. While Daesh does commit unspeakable atrocities that we condemned, the surrounding context is vital. For example, the UK’s ally, Saudi Arabia, beheaded 47 people in one day last month.

According to a poll by YouGov late last year, 14% of Britons think there is:

a very or fairly high chance of a family member or friend being killed or wounded in a terrorist attack.

While, a series of polls in the US in December found that many people consider terrorism their highest concern, trumping issues like the economy or health.

However, this chart produced by The Intercept puts the threat of terrorism into perspective: 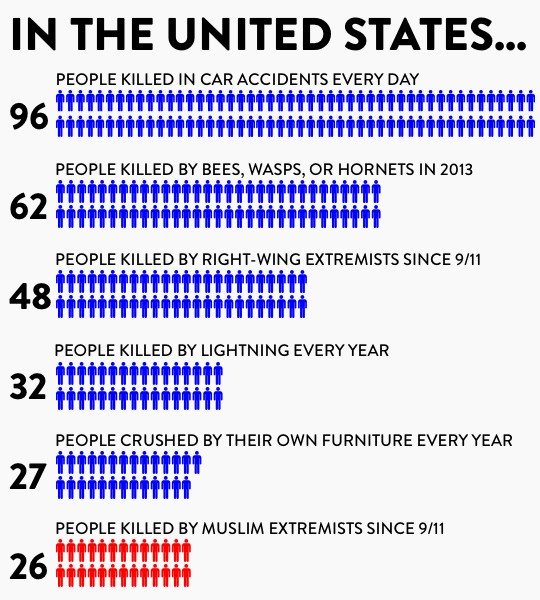 Perhaps the most staggering comparison here is that, in the US, more people are crushed by their own furniture every single year, than have been killed by Muslim extremists in the past 14 years. That new table set from Ikea is literally more of a threat to you than terrorists.

In America, only 26 people have been killed by Islamic extremists since 9/11. This is fewer than the amount of people who die every year from lightning. For additional perspective, the chance of being struck by lightning in the US is a whopping 1 in 960,000.

The psychology of negative news

Why do humans seem more susceptible to negative news, like stories about Daesh? A common notion in psychology is that of ‘negativity bias’. It’s the idea that humans have a natural tendency to be struck more by negative, rather than positive information. So, when two equally emotional news stories are presented, the negative one is more likely to leap out at the reader, as shown by this experiment.

This can be explained as a modern manifestation of our need for self-preservation. Threats are always negative, so monitoring negative information is more likely to keep you alive. As psychologist Tom Stafford said:

Bad news could be a signal that we need to change what we’re doing to avoid danger.

Despite Daesh and other negative news often not being a threat to us, our brains still initially interpret the information from the perspective of survival and therefore it has more of an impact on us.

Hence, negative news tends to sell better than positive news, meaning that profit-seeking outlets are more likely to report on it. This is part of the reason threats, like the threat posed by Daesh, are blown out of proportion.

How the government instrumentalises fear

‘Terrorism’ has become a hot-button issue that the government instrumentalises at will in order to pass through legislation the public would usually object to. For example, Theresa May’s planned authoritarian ‘investigatory powers bill’ would make mass surveillance of citizens legal, in a huge invasion of our privacy. May uses terrorism to justify this bill:

The ability to intercept the contents of communications in order to acquire sensitive intelligence to tackle terrorist plots and serious and organised crimes.

Yet, the reality of the terrorist threat is minuscule: you are much more likely to be killed by bees, wasps or hornets. It does not warrant such draconian domestic measures. This leads us to the conclusion that terrorism is merely a convenient pretext, allowing the government to legally erode the right to privacy for law-abiding British citizens.

The government knows fear can subvert mindful analysis; a person worried about dangers to their family will more readily give up their liberties if promised it will ensure their safety.

In short, while the Daily Star article is ridiculous, it is incremental to a wider climate of out of proportion media coverage. The government and media both gain from our tendency to be struck by negative news: The media outlets sell more publications while the government uses the fear- spread by themselves, and the media, to gain more control over the citizens, like with the ‘investigatory powers bill’.

The media has turned Daesh into a greater mythical entity than it really is, capable of embodying any fear, even that of a zombie apocalypse. This is despite the less well-known terrorist group, Boko Haram, actually murdering more people.

In a world where we are bombarded by stories about Daesh every day, we must uphold rationale over our visceral reactions, or we will end up giving up our civil liberties for nothing.

–Support the Canary so we can deliver the context that matters.

–Write to your MP, asking why the threat of terrorism is overstated.