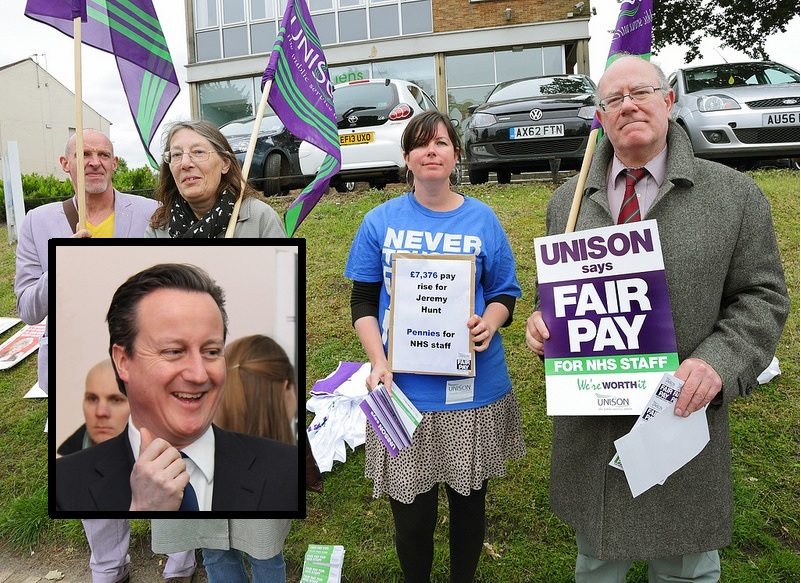 Public sector workers in the UK have been awarded an insulting 1% pay rise by the government. Combined with years of pay cuts in real terms, this “leaves the average NHS worker over £4,000 worse off every year than they were a few years ago”, according to Jon Skewes of the Royal College of Midwives.

This “miserly” increase follows a much more substantial raise for another set of public sector workers: the government itself. Over the last year, MPs have been given a whopping 11.3% wage increase. This disparency is huge, and reveals nothing about actual worth. But it betrays everything about Tory values.

The 1% increase for doctors, dentists, NHS staff and the military was announced on Tuesday by Treasury minister Greg Hands. Public sector pay has either been frozen, or increases capped at 1%, since the Conservatives came to power in 2010. Christina McAnea, Unison’s Head of Health, explained what this means in real terms:

Government pay policies since 2010 have seen most health staff lose thousands in real terms – nurses are down more than £4,700 since then

But Hands sought to justify the continuation of such a miniscule increase:

With an increasingly turbulent global economy, pay restraint continues to be a key part of our plan to finish fixing the public finances.

And to soften the blow, he added:

Our armed forces, NHS workers and prison officers do a brilliant job serving our country.

This stands in stark contrast to its own increased remuneration over the last year. David Cameron, for example, accepted the substantial pay rise for his role as an MP, explaining:

The rate for MPs is set by the Independent Parliamentary Standards Authority (Ipsa). They make pay recommendations “at the same rate as changes in public sector earnings published by the Office of National Statistics”. And they have explained why it works out at 11.3% for MPs:

The ONS [Office of National Statistics] index takes account of promotions and bonuses which may explain why the figure is higher than the one per cent wider public sector pay policy.

But the government obviously doesn’t take “account of promotions and bonuses” when setting public sector pay, even though MPs benefit from that criteria in their own financial compensation. In short, what’s good for the parliamentary goose is being denied to the public gander.

It’s disappointing for NHS workers that the pay review body has stuck to the artificial 1% pay freeze imposed by the Chancellor.

It’s no surprise that many desperately hard-up health workers are leaving the NHS to come back as agency staff where they can earn more money.

This is entirely counter-productive. NHS agency staffing costs have soared in the last few years due to an ongoing staffing crisis in the health service. And ensuring that more permanent staff leave because of insufficient pay will only drive these costs up more. In other words, it’s a false economy. It is also absolutely idiotic for a government supposedly obsessed with balancing the books.

All this pay freeze succeeds in doing is ensuring that public sector workers know their place in the elitist pecking order. George Osborne will travel all the way to Brussels to ensure bankers’ bonuses are protected. But what about those who fight for our lives in hospitals and on battlefields? The Conservative government thinks they should be paid the absolute minimum. This is Tory ethics and ‘equality’ in a nutshell.