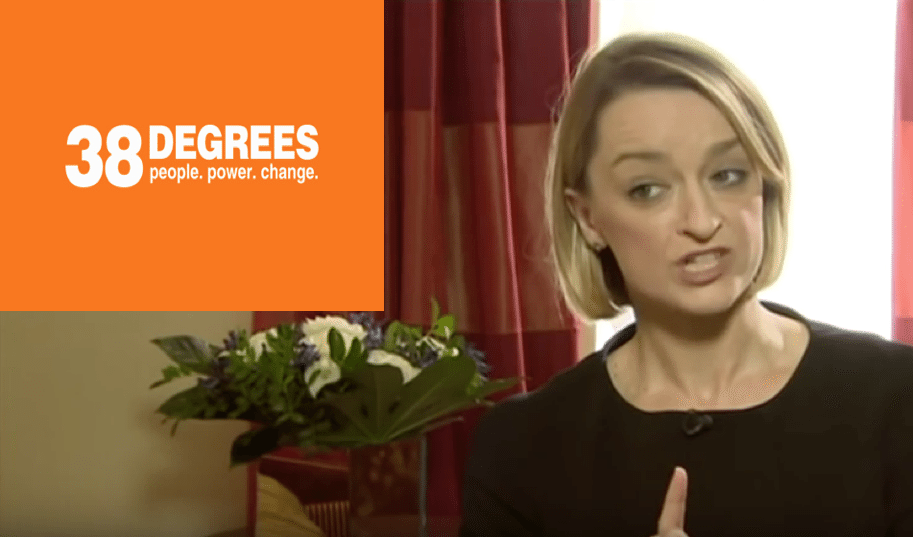 Petition site 38 Degrees recently removed a 35,000 signature strong petition to sack BBC political Laura Kuenssberg for political bias towards the Conservative government, citing that the petition was sexist. However, the petition site refused the request of former UK ambassador Craig Murray to provide any evidence to support their claim. Murray has stated that it is ‘probable’ that the real reason for the petition’s removal was not misogyny, but ‘establishment pressure.’ In this piece, we walk through the issues raised by this suggestion.

In a blog post entitled ’38 Degrees Refuse to Release Evidence of “Sexist Abuse” of Laura Kuenssberg’, former British ambassador to Uzbekistan, Craig Murray, posts a transcript of a call with a 38 Degrees spokesperson Adam McNicholas. During the conversation, Murray repeatedly requests to know what evidence was used to advocate removal of Kuenssberg petition, McNicholas’s response is laid out verbatim in the transcript below:

Hello Adam. I hope you are not quite so busy today? Has it calmed down for you?

It is a bit less busy. Well we are very busy on other important things. Did you see the article by David Babbs in the Guardian today?

I did, but it doesn’t really answer my question. I haven’t received the evidence of the abuse connected to the petition which you said you would consider sending me. Are you going to send it?

I don’t really have the time for this

There were abusive tweets and comments

Can you send them to me?

You can search for them yourself online

I have done so. But you must have the evidence?

This is a big story. In all the national press. You must have kept the evidence on the basis of which you made the decision?

You said yourself you had seen misogynistic comments

So you did see misogynistic comments

Search yourself online. There were tweets.

So far I have been able to find one. That is one comment and one tweet. Have you seen more?

There were misogynistic comments and tweets

More than two? Out of thirty five thousand signatories? How many have you seen?

There was misogynistic abuse

How many have you seen. You personally Adam. You said yesterday you had seen the evidence. Have you, personally, seen more than two?

If you are going to start shouting at me

More than two? Simple question, yes or no?

I don’t expect you to be impolite and abusive towards me.

How much evidence did you see?

We had seen sufficient evidence.

We had seen sufficient evidence.

You can record if you like. We had sufficient evidence.

In a call with The Canary, the same spokesperson cited in Murray’s blogpost confirmed the pair had several conversations and that his position remains as outlined in the transcript above. We asked for additional comment and McNicholas stated that:

“We’ve set out the case for why we took the action we did in the David Babbs piece for the Guardian.”

We have reviewed the Guardian column by 38 Degrees Executive Director David Babbs, and believe that while it provides an excellent reason for the petition site to have taken action, it does not provide evidence to support that case. In the article, entitled ‘We took down the Laura Kuenssberg petition to show sexist bullies can’t win’, Babbs states:

when we discovered that a petition on the 38 Degrees website was being linked to misogynist abuse, it was a shock – for me, the rest of the 38 Degrees office, and to Joe who’d started the petition. We all agreed that this was totally unacceptable. But we were faced with a dilemma about what to do.

It was a difficult decision – and it might not have been the right one – but we agreed to take the petition down. Joe put up a statement explaining why.

No evidence of this sexism is supplied in the article. As Murray states, this absolutely does not mean this evidence isn’t out there. But the refusal to present it doesn’t make any sense. As Murray points out,

I do not claim the 38 Degrees do not have any evidence to show to “justify” removing this petition. But if they do, I find their attitude absolutely astonishing. It seems to me most probable they did so under establishment pressure with no serious consideration of evidence, and zero concern for the 35,000 people – about half of them female – they have now stigmatised as misogynists.

And if there were indeed some petulant misogynists using the petition to advance their own agenda – is this the fault of the petitioner, or the 35,000 who signed it in good faith? Does it make the petition sexist? How is Kuenssberg, or any person in the role, to be held account by the public in future if the standard for undermining such efforts is set so low? These questions are not rhetorical. These are matters on which we should be clear.

At the same time, we should not leap immediately to assume 38 Degrees did act under establishment pressure. A recent Financial Times piece described the site as “the bane of many MPs’ lives for the vast tide of correspondence its 3m members generate.” As Babbs stated, in response to being asked if the site was secretly a ‘left-wing pressure group’, his answer was perfectly reasonable:

What’s clear is that the 35,000 signatories of the Kuenssberg petition, and those who had their chance to sign taken away – are seeking clarity. This has as much to do with context as it does content.

In recent weeks, it seems anyone who advances against the established media or political class finds themselves subject to abuse – antisemites, hippies, terrorist sympathisers, misogynists, etc. As Novara Media editor-in-chief Aaron Bastani quipped on Twitter in the wake of the decision this week:

Bastani raises an excellent point. It is certainly beginning to feel as if, whatever the basis on which members of the public or anti-austerity parties come at the establishment, their concerns will be sidelined by accusations of some sort to discredit them. Anyone who says something conveniently awful is wheeled out as representative of whomever is in need of discrediting. Be they Corbyn supporters, members of the public infuriated by perceived BBC bias, critics of Israel, junior doctors attempting to secure NHS patient safety – any individual or group who finds the courage to put their head above the parapet, is promptly aimed at with the guns of stigma and abuse.

If such efforts are underway, and are intended to quell dissent, they appear to be failing. Rather than backing down, maligned and marginalised groups are beginning to find a common ground which has hitherto eluded them. It appears momentum is building and friendships are forming. It brings to mind the phrase: