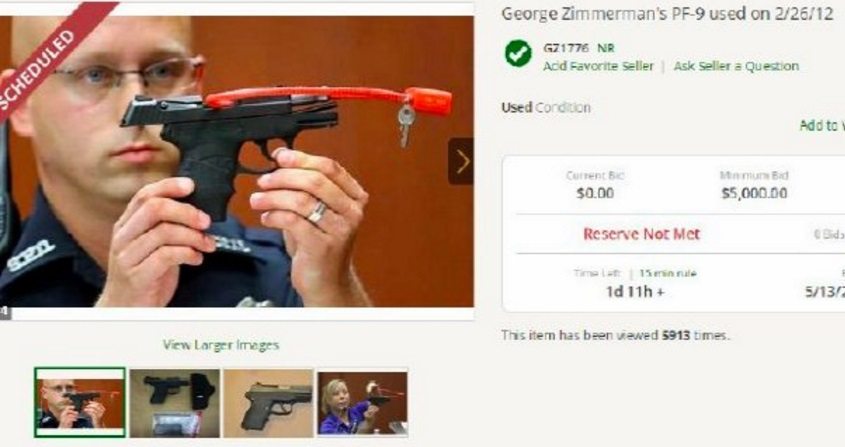 George Zimmerman, who admitted to the killing of Trayvon Martin in 2012 and was subsequently acquitted of his murder, is auctioning the gun he used on GunBroker.com.

The weapon has recently been returned to Zimmerman by the US Department of Justice. Following this he has listed it online, informing prospective buyers:

I am honoured and humbled to announce the sale of an American Firearm Icon […] Now is your opportunity to own a piece of American history.

Zimmerman remains vehemently defensive about his actions, and employs the language of his defence as marketing copy for the weapon, listing its as:

He has used photos from the murder trial itself as the sale images for the listing. The starting price is $5,000.

Zimmerman has spoken publicly about the sale, hinting that it is an issue of closure for him. He told a local Fox News programme that it’s:

time to move past the firearm, and if I sell it and it sells, I move past it.

According to the site, the proceeds will go to, amongst other things, “fighting Black Lives Matter violence against Law Enforcement officers”. To a local Fox News station, he says he “couldn’t care less” about those opposed to the sale, and that not publicising it “wouldn’t insulate me from these radicals.”

Zimmerman was banned from Twitter for what Huffington Post called “horrific” use of his account, after retweeting a photo of Martin dead on the ground with the caption:

Z-Man is a one man army.

He also tweeted phrases such as “Cops lives matter, black slime doesn’t” and, to someone who tweeted that they wanted to slap him:

We all know how it ended for the last moron that hit me. Give it a whirl cupcake

The Trayvon Martin Foundation is committed to its mission of ending senseless gun violence in the United States. This election season, we are laser focused on furthering that mission. As such, the foundation has no comment on the actions of that person.

As the Black Lives Matter movement continues, those who say it is irrelevant in 2016 need only glance at the actions of Zimmerman. His opportunistic attempt to try and profit from his killing of an unarmed black teenager demonstrates the need to continue to oppose the very real spectres of racism and violence, on both sides of the Atlantic.