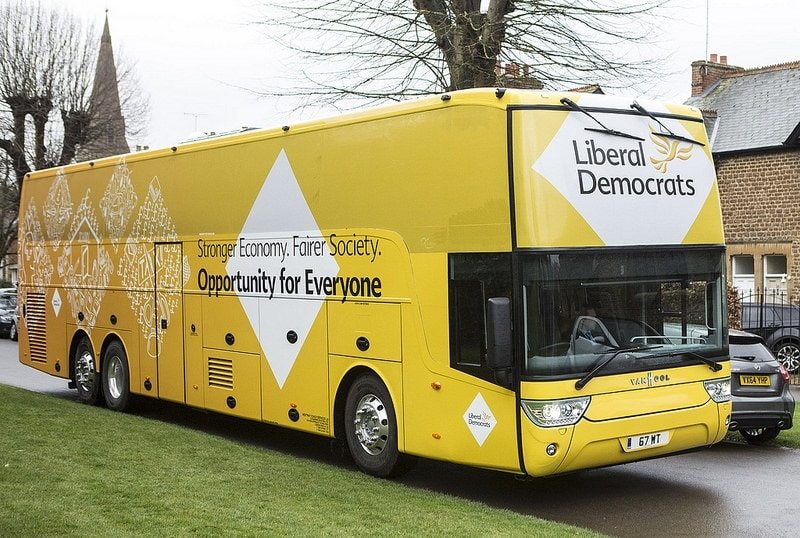 It is no longer just the Conservative party that is facing allegations of electoral fraud in the 2015 General Election. Nick Clegg’s former Parliamentary Private Secretary Duncan Hames may have failed to declare transport costs for his Chippenham constituency campaign.

At the time, The Guardian reported that the Lib Dem’s battle bus was being used to transport activists from London to constituencies in order to deliver leaflets.

And here is the battle bus struggling to get up a hill in Hames’ Chippenham constituency:

The bus was in Chippenham during the ‘Short Campaign’ period (after 30 March). Yet Hanes declared zero transport expenses for his Short Campaign:

A whisker under already, these travel costs would have pushed the Lib Dem candidate over the spending limit.

Before the election, The Independent described Chippenham as follows:

A key test for the Lib Dems. If seats like this start falling to the Tories Nick Clegg’s party is in trouble.

The Lib Dems would not want to lose such a crucial swing seat – the motive to gain an edge through overspending is there. And spending more is a trend among marginal seats. The Electoral Reform Society writes:

Our research shows that the parties spend 22 times more on winning some people’s votes than on others, depending on whether they live in a safe seat or a marginal seat.

The Lib Dems deny the allegations. A spokesman told The Canary:

We did not bus activists or campaigners to Chippenham, or anywhere else, in the short campaign. If we had it would have been an election expense and apportioned accordingly.

The only bus we ever had was Nick Clegg’s leader tour bus, which carried journalists and his staff. This is totally different to offering transport to bring activists into a seat to campaign.

However, this is perhaps at odds with The Guardian’s article that states the bus “will take party campaigners around the country over the next six weeks running up to the general election” (emphasis ours). The article also stated that the bus was used to transport activists to deliver leaflets in constituencies.

Furthermore, The Mirror reported that when the battle bus broke down in the marginal seat of Hornsey & Wood Green, “activists” made light of the situation:

Activists took advantage of the hottest day of the year to have a roadside picnic.

And this was during the short campaign period (after 30 March):

And a report from the Lib Dem website reads:

After Nick has taken a swipe at Labour’s local record and given a pep talk to activists and told them he is sure that “with their help”, Hughes will retain the seat, it’s time for a quick photo op outside. Then we all hop on the battlebus.

This seems to suggest the activists also hopped on the bus.

Of course, if two groups commit fraud they do not cancel each other out. In fact, it would suggest institutional abuse and mandates a deeper investigation into the electoral activities of all political parties.

Aside from a probe by the Electoral Commission, at least 14 police forces have confirmed they are currently investigating the findings from Channel Four News and The Mirror.

While it is clear the Conservative party currently faces by far the most serious allegations, all counts of suspected electoral fraud from any political party must be treated seriously and investigated.