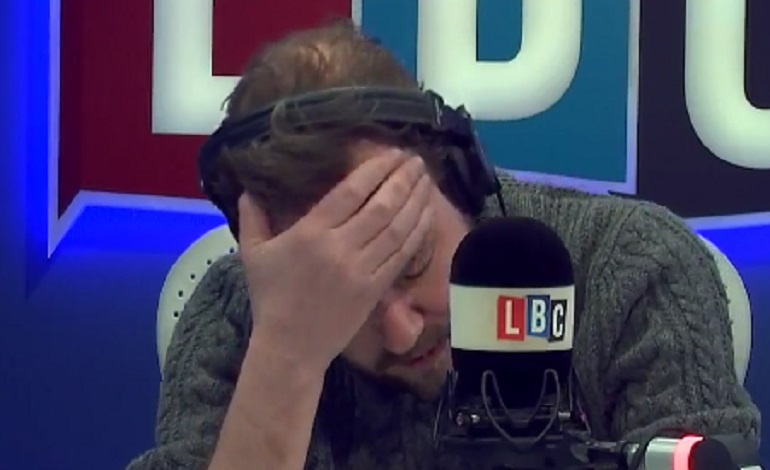 A caller to LBC radio stopped presenter James O’Brien in his tracks, after revealing a hard-hitting truth about Brexit. The woman, whose husband is Spanish, left the presenter stunned, but angry, in equal measure.

On Tuesday 14 February, Shirley called in to say:

My husband’s been here since 1971. He’s always been very, very happy here. We’ve got a daughter here. I’m British. He’s Spanish… He said to me the other day: he’s been here 47 years, and he feels like a foreigner. For the first time in his life.

O’Brien asked Shirley why her husband felt like this. She said:

Because of having a foreign name… He loves England. He’s given up everything in Spain to live here, ’cause he loves the people, he loves the culture…

But to make the situation even more devastating, Shirley revealed that her husband’s cancer had come back after being in remission for two years. She said:

For the first time in my life, I saw my husband quite upset.

O’Brien then asked Shirley what people can do to help him. But she said of people who voted to leave:

The presenter said it was the “21st century equivalent of ‘some of my best friends are black'”. He said of Shirley’s husband:

He’s not a faceless person on the front page of The Daily Mail… I’m afraid my profession has done more to create the idea… that they’re [foreigners] all scumbags or criminals… and I dunno what to say to you. Their work is done if your husband feels like that.

O’Brien was blunt in what he wanted from the politicians and media who pushed Brexit:

I demand an apology for what they’ve done to your husband. I demand an admission of guilt for the lies that they’ve told… and then we can all start working together to make things better. But not while they’re trying to blame it all on Lily Allen and Meryl Streep… Unbelievable… You wonder why I stay angry? Boom. Shirley is why I stay angry.

The presenter’s words may ring true with thousands of people across the country, as the Tories’ ‘Hunger Games‘ Brexit begins to bite.

Watch O’Brien explaining why EU nationals should be allowed to stay in the UK after Brexit (or you can watch the call with Shirley here):