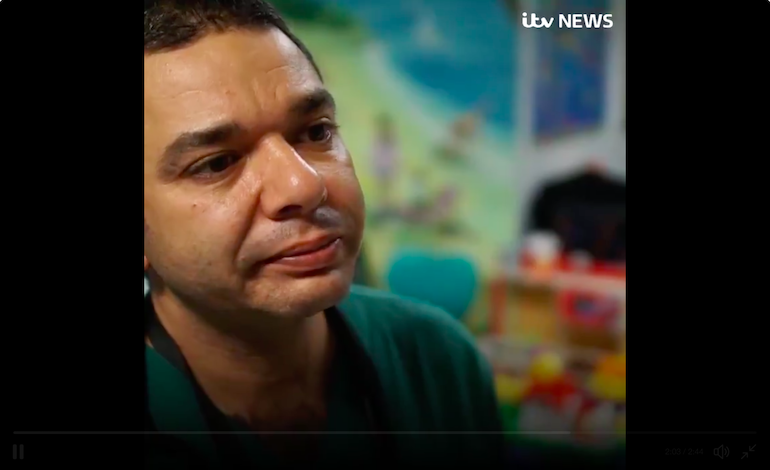 A new video reveals what life is really like inside the NHS. ITV News visited Royal Berkshire Hospital in Reading and recorded its findings, including interviews with a doctor and patients.

In the video, an interviewer asks lead A&E consultant Omar Mafousi how he feels about the upcoming winter. Mafousi replied [1:37]:

It is scary. It’s busy. It’s going to get busier… Where you are running out of space to even unload patients off an ambulance.

Asked if patient care is being damaged, he replies [1:49]:

Overall, yes. We can’t give them the best care we want.

The interviewer then asks “if you knew how bad it could be, would you go into this?” The visibly emotional doctor responds [1:56]:

I’d have to think again. If I knew it was going to be as bad as this 10 years ago, I would have thought twice about being a doctor.

Always remember this is no accident:
In 3 neoliberal decades governments cut HALF the NHS beds. Accelerating now under this one, culling A&Es, family GPs & much more. #NHSBillnow #JC4PM pic.twitter.com/OVwH9701NW

Despite repeated reports of crisis in the NHS, Health Secretary Jeremy Hunt has continually defended the government’s management of it in public:

NHS under Cons has seen more money,more docs and more nurses than ever in history.Those with private med insurance DOWN 9.4% since 2009! 2/2

But Stephen Hawking previously said that Hunt is guilty of “cherry-picking” and “abusing” scientific research to justify NHS underfunding. And doctors and medical professionals supported the world-renowned theoretical physicist’s position.

More recently, actor Ralf Little called Hunt out on his claims. In an epic 42-tweet takedown, Little analysed and dissected Hunt’s defence of the NHS. He also challenged him to meet, along with fact checkers, to scrutinise his claims. The Health Secretary agreed, but went silent when he was asked by Little to confirm.

The government has denied claims that it is trying to ‘Americanise’ the NHS. But doctors believe that this is exactly what it is doing, ‘by stealth’. And its efforts are led by Hunt, the co-author of a book that called for the replacement of the NHS with an insurance-based system and for the private sector to be involved. Like the system in the United States.

And when we hear British Prime Minister Theresa May talk about a so-called “British dream”, echoing the ‘American Dream’ term (widely accepted as a lie), it’s clear what the government’s intentions for the NHS are.

This is why it must be stopped. Lives depend on it.

– Follow the doctors’ campaign for a judicial review to stop the NHS crisis here and on Twitter.