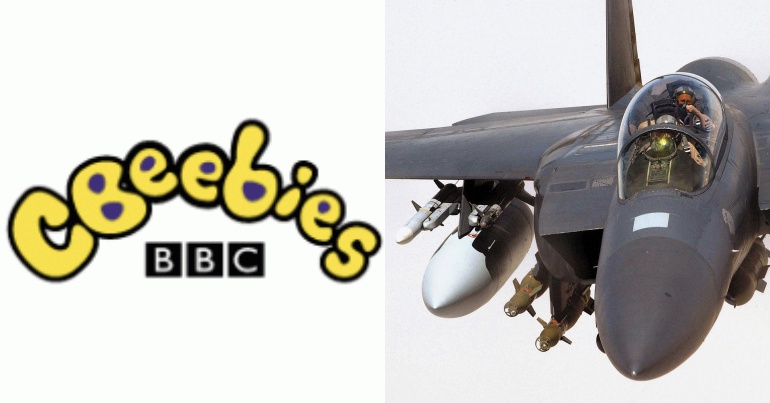 A report by the Observer has revealed that arms manufacturers spent millions targeting children as young as four in UK schools. One used a children’s TV star to promote its wares in the classroom. While another created a “missile simulator” for children to “play with”.

Meanwhile, the weapons made by these companies are killing thousands of innocent people – including children – in conflicts around the world.

As the Observer reported, arms companies who have made tens of billions selling weapons to human rights abusing governments, sponsor events and lessons in schools. They also promote the creation and sale of weapons and the defence sector as a whole.

Maddie Moate inspiring the audience at our Roadshow launch… pic.twitter.com/X1UwgPmKzQ

This was just one of 420 visits to schools in the UK where it offered lesson plans for “children as young as seven”. BAE also offers children aged 14 to 16 the opportunity to take part in work experience.

BAE’s warplanes are playing a central role in Saudi Arabia’s attacks in Yemen. Its armoured vehicles were used by Saudi Arabia in Bahrain to support the repression of democracy protests in 2011.

On 9 August, a Saudi-led coalition bomb, supplied by Lockheed Martin, hit a school bus in Yemen, killing 40 children and 11 adults. This was just the latest tragedy in a brutal war that is, according to the UN, the “worst humanitarian crisis” in the world.

BAE’s promotional material shows that in 2013 alone, it allocated £76.3 million targeting children and young people from the age of four to 21 promoting “Education” and “Learning” impacts.

As the Green Party co-leader pointed out, this isn’t ‘education’. It’s a deliberate attempt to normalise “their deadly business”:

Raytheon, which has sold bombs and missiles to Israel & Saudi Arabia, is among arms companies targeting schools. Let’s be clear. This is not out of care for education or children’s well-being. It’s a PR exercise to normalise their deadly business. https://t.co/wGfxI20IFR

Other Twitter users asked an important question. Do parents know what’s going on?:

Do these school governors really think this is acceptable? I wonder if they make it clear to parents they are propagandists for the arms trade…https://t.co/XsARwUq6tQ

“No scruples, no morals no shame”

BAE Systems is just one of the groups targeting children. As the Observer reported:

It doesn’t end there. Italian company Leonardo, the world’s 9th largest arms company, has sold drones to Pakistan, armoured vehicles to Oman and helicopters to Algeria, Libya and Turkey. It also works in UK schools. Its website states it “actively supports education and skills development through partnerships with schools, colleges and universities”.

As one Twitter user stated, these companies have “no scruples, no morals, no shame”:

#Arms industry spends millions to promote brands in #schools (No scruples, no morals, no shame) https://t.co/pIz3oZFE0R

As CAAT’s Andrew Smith explained, schools should cut all links with arms companies:

The fact that companies that arm and support human-rights-abusing regimes are targeting such young children is extremely concerning.

Arms companies aren’t targeting schools because they care about education. They are doing it because they want to improve their reputations and normalise their appalling business.

Smith is right. Companies who profit from death and destruction have absolutely no place in schools. And there’s absolutely no defence for a children’s TV ‘star’ to join in with this sick collaboration.

– Write to your local MP to demand an end to UK arms sales.