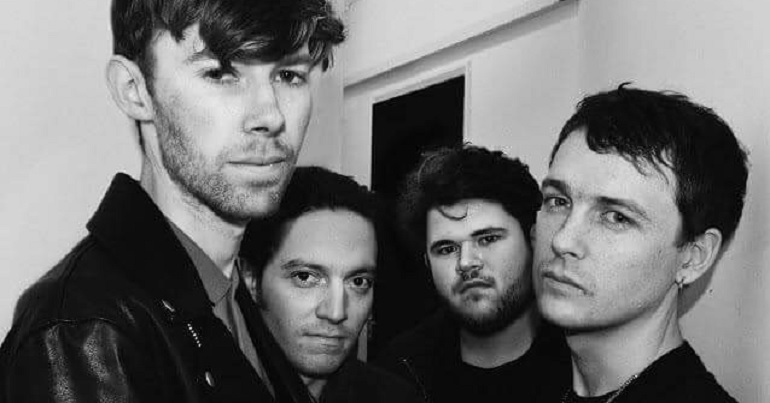 It’s official: punk is hotting up the music scene, once again. From the IDLES‘ latest release to Cabbage, it’s time to dust off the old notion of mohawks and safety pins and embrace one of the most politically driven genres of music. And one band is about to blow up.

Sisteray is a London-based four-piece punk band, featuring Niall Rowan on vocals, Michael Hanrahan on bass, Calum Landau on drums and Daniel Connolly on guitar. Formed in 2015, the group quickly shot to prominence on the live music scene. Having played the Isle of Wight, Reading and Leeds festivals, their first EP, 15 Minutes, was hailed by many as an instant classic.

But it’s the band’s eclectic composition and intricate production which is really making Sisteray stand out. Now, the band is back with a new, four-track EP, Sisteray Said which is out on 7 September. So The Canary caught up with guitarist Connolly and vocalist Rowan to discuss punk, politics and the real-life ‘walking dead’…

The rise of the anti-establishment

Originating in the 1970s, punk and the subculture around it was often characterised by anti-establishment views. This collided with the bubbling anger of disenfranchised young people. It emerged in the UK at a time of political and social upheaval: the austerity and economic chaos of the 1970s through to Margaret Thatcher’s social scorched earth policies of the early 1980s. So, it’s unsurprising that punk and the anti-establishment, anti-system attitude that defines it is on the rise again, now. And Sisteray is emerging at the forefront of that ascension.

Rowan seems to recognise this. But he believes the anger and disenfranchisement are manifesting differently. He told The Canary:

As a band we observe what we see around us… We also focus on the situations we find ourselves in. Young people are in a funny position now, because the world is changing… The advent of social media means new ways of thinking and interacting have become commonplace. I don’t see this as a bad thing. But like the 70’s and any period where there is political turmoil and uncertainty the youth will revolt. And in turn, they’ll engage with issues that they face socially. I just think that it manifests itself in different ways now and takes on different forms. Music was way more tribal when The Clash were around. Whereas today it’s much harder to pigeonhole people and put them in one box.

Indeed, pigeonholing Sisteray is also extremely difficult to do; something which Sisteray Said displays perfectly.

If you’re expecting straight-up punk rock, then think again. The EP’s writing and production are far more eclectic than that; the latter being of an incredibly high standard. This searing quality is all the more impressive, given Sisteray Said‘s release on independent label Vallance Records.

The EP kicks off with Wannabes; a wry takedown of modern-day celebrity and everything it represents. To call it ‘punk’ would be a misrepresentation. The stomping drum solo intro does have a feel of the Anti-Nowhere League about it; thrashing guitars join the fray until Rowan’s sneering, casual punk vocals kick in.

But once it gets going, Wannabes wouldn’t feel out of place on Radio 1‘s 90s indie show Evening Session (for those of you who remember that). The stripped back feel on the verses, coupled with the persistent, on beat drums recalls the likes of Elastica and Flowered Up. What Sisteray do so well on the track, though, is to make it feel like it doesn’t belong in any musical pigeonhole. And this genre-smashing continues on the rest of the EP.

Track two, Rumour Mill, is equally as musically curious. It probably has the most complex and layered production of the EP’s four tracks. Beginning with another, more frantic drum solo, the bass guitar then joins in, followed by the heavily reverbed electric piano. The whole thing feels like you’ve been transported back to the 80s. But then Sisteray blow your preconceptions apart as the chorus kicks in, and we’re firmly back in punk/indie mash-up territory.

The next track, Algorithm Prism continues in the vein of smashing apart modern day life; this time taking aim at social media, the tech giants and how they want to control us all. But we’re firmly back in punk territory this time:

This shredding of pop culture, modern life and the forces – like tech companies and social media – that exist in it is a persistent theme throughout the EP. It would be easy to say that Sisteray was being slightly hypocritical, biting that hand that sometimes feeds it. But because of the way Sisteray Said is constructed, it feels like the band is almost warning us of the perils we’ll face. Of social media, for example, Rowan told The Canary:

It’s a tool at the end of the day and as such it’s completely down to how we use it. Social media has aided us greatly and undoubtedly made many things easier. But I do think that there is a tendency to over use it and become reliant upon it. I think it’s become an addiction for some people and that’s propelled by suggested posts and adverts that are continually presented to us…

The final track, Sisteray Said, is pure, energetic punk. A furious, frantic bass guitar riff kicks things off before screaming guitars explode and Rowan’s punchy, staccato vocal disseminates modern-day London. It’s almost like the band is shouting out to The Clash’s London Calling – saying ‘Look! London’s still a fucking mess! But we kind of love it!’

The EP, while swiping at pop culture and modern life, is also – possibly inadvertently – lashing out at corporatist capitalism; as essentially all the subject matter Sisteray deals with has its roots there. Rowan acknowledges this, but told The Canary:

I don’t think the EP necessarily tackles a capitalist society. I think it definitely touches upon it. Probably most evidently on ‘Algorithm Prison’ and possibly ‘Rumour Mill’. I think the other tracks are removed from the political spectrum and tend to focus more on our personal situation as a band.

The songs place some emphasis on our conscious decision to be complicit with the way our society is governed and in many ways we are products of that. The lyric ‘amongst the walking dead’ touches firstly upon the way people are on a hedonistic night out but also can be seen as our comment on the way society functions. It ties in with a ‘generation under general anaesthetic’.

Sisteray is part of a growing resurgence of conscious art. From musicians like Natty and Kabaka Pyramid to political theatre and film, via photography, satire and grime, politically and socially challenging art is experiencing a renaissance. Rowan is optimistic about the emergence of a new wave of conscious artists; notably grime:

The arts are hugely important as a mechanism for political and social change… I think it’s always been the case with bands like The Clash taking on that mantle in the 70s. Grime has become the new punk in a way. For me it definitely conjures up images of a gritty London and it’s very specific. The tempo of the music alone is reflective of London and culture as we know it…

This has seemed to spread now… It’s exciting to see these movements really grow… across the country and to the US. Because everyone is a product of their environment… we… sell that lifestyle to others and make others aware of it. This can then lead to change or input on a wider scale. I think a great artist really reflects the times. To do that you have to be a big, shining mirror of reflection.

Unreservedly acerbic. But with a soul.

Sisteray epitomises the idea of artists reflecting the times they live in; as does Sisteray Said. It’s a furious, unreservedly acerbic masterclass in best things coming in small packages. Yet Sisteray’s wry humour and underlying desire for change also shine through. If the band can squeeze all that into an EP – then Sisteray’s first foray into full album territory should truly be something to behold.

– You can pre-order Sisteray Said via iTunes, pre-save it on Spotify or pre-order vinyl, CD and cassette copies here. Find out more about the band.