The DWP was just shamed by parliament over Universal Credit - Canary

The Department for Work and Pensions’ (DWP) flagship benefit Universal Credit has been at the centre of a political storm. But parliament has now weighed in with a huge report. It makes for yet more damning reading.

The DWP: Universal Credit under the spotlight

The House of Commons Library produced a report into Universal Credit ahead of Labour’s Opposition Day debate on Wednesday 17 October.

The contentious new benefit replaces six old ones with a single payment. Currently, in what’s known as “live service”, Universal Credit has been rolled out in certain areas for new claims. Soon, the DWP will move everyone onto “full service“, including those on old benefits. This process was due to start in 2019. But on Tuesday 16 October, the DWP said that the rollout was being delayed. The BBC reported that the department was also making changes to the benefit. By June 2018, around 15% of people who the benefit would eventually affect were on it.

The report looks at the impacts of Universal Credit on claimants. While it doesn’t draw its own conclusions, it uses analysis by other organisations to create an overview of the benefit. And it shows how flawed it has become.

First, the report looked at Universal Credit’s impact on household finances. It quoted three other reports. The first was an analysis by the think tank Policy and Practice, published by the Observer on 14 October. While the Commons’ report says Policy and Practice has not yet published the analysis itself, it notes the detail. It said that around 2.8 million households would be worse off. This included around 750,000 households on disability benefits losing around £76 a week. But Policy in Practice noted two million people would be better off by £26 a week on average.

The Commons’ report also quoted a Resolution Foundation report from 2017. It said that 3.2 million households would be worse off on Universal Credit:

It also detailed the Office for Budget Responsibility’s (OBR) analysis. The OBR said 2.6 million households may lose out by 2022/23: 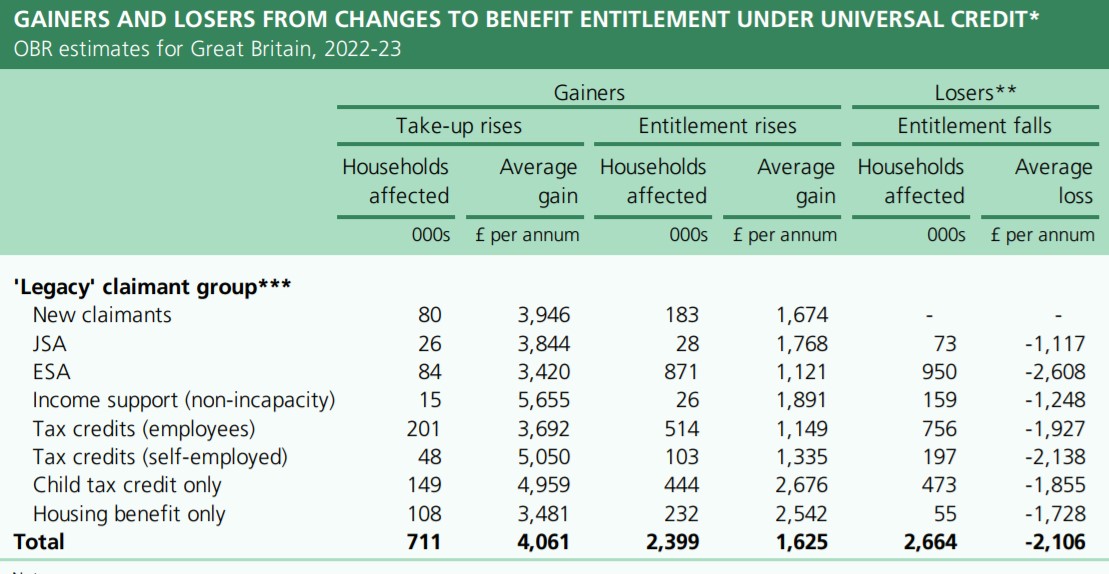 The report then dealt with rent arrears. It detailed research by the Association of Retained Council Housing (ARCH) and the National Federation of ALMOs (NFA). Their research took place before the DWP made changes to the length of time it made claimants wait for money. But it found that:

Then, the Commons’ report showed research by the Residential Landlords Association (RLA) of private tenants on the benefit. It found that:

The Commons’ report then dealt with food-banks. It detailed research by the Trussell Trust from April 2018 called Left behind: is Universal Credit truly universal? that found:

Finally, the Commons’ report looked at “managed migration”. This is the process where the DWP will move people from old benefits onto Universal Credit. The report said managed migration will affect around 2 million households. It detailed concerns people gave to the Social Security Advisory Committee (SSAC). As The Canary previously reported, the SSAC ran a consultation into the benefit. The Commons’ report said that people gave the SSAC a record number of responses. Some of these were:

DWP’s proposed approach places the burdens of arranging the move to… [Universal Credit], and the financial risks associated with it, almost entirely on the shoulders of claimants – who may be vulnerable and least able to bear it.

DWP has to have in place comprehensive and robust plans to help people who do not engage with the migration process – e.g. because they’re busy, stressed, ill, don’t have a computer, can’t get through to the helpline or don’t understand what they have to do. There is real concern that significant numbers of people could ‘fall through the cracks.’

The Canary asked the DWP for comment. It referred us to Labour’s debate and said it had nothing to add.

Overall, the Common’s report drew no conclusions. Nor did it make its own recommendations. It was merely a bulk of evidence into Universal Credit. This, in turn, adds to the bulk of evidence that already exists. Now, people need things to actually start changing. And quickly.

– Read more from The Canary on Universal Credit.