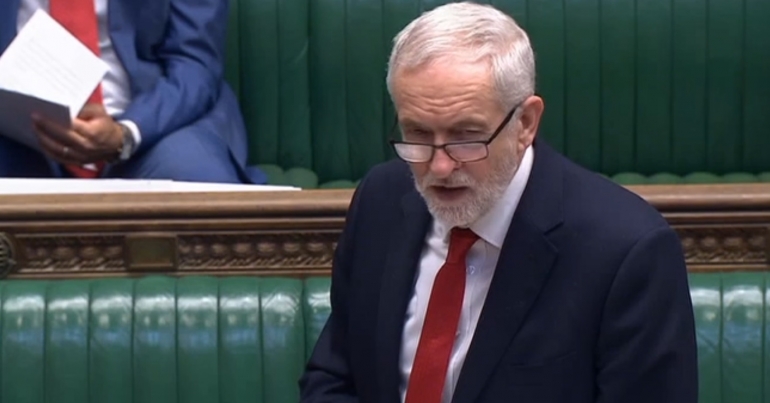 Jeremy Corbyn described the internationalism of Cuban doctors who’ve travelled to Italy to help fight the new coronavirus (Covid-19) “as inspirational”. He did so during his final speech as leader of the Labour Party on 25 March.

The BBC previously called Corbyn “a long-time supporter of the Cuba Solidarity Campaign [CSC] – which campaigns against the blockade on, and foreign intervention in, Cuba”. And as CSC’s Rob Miller highlighted to The Canary, Cuba’s support for countries battling coronavirus is actually part of a “long history of international medical solidarity”.

"The internationalism of the doctors from Cuba who have gone to fight the virus in Italy is inspirational."

In his last speech as Labour Leader at PMQ's, @jeremycorbyn says that we need to learn from this crisis & ensure our society is defined by solidarity & compassion. pic.twitter.com/bn4V0JJG3z

As The Canary reported on 22 March, dozens of Cuban doctors and nurses arrived in Italy, which has recorded 8,215 coronavirus-related deaths at the time of writing (the highest toll in the world by far). Less than a week earlier, the Cuban government allowed a British cruise ship with five suspected cases of coronavirus (and 1,063 crew and passengers) to dock after other countries had refused it permission. The Cuban foreign ministry explained that the current crisis requires “understanding health as a human right and strengthening international cooperation in order to address our common challenges”.

Over the past few days, Cuba has reportedly sent 144 health workers to Jamaica, 136 doctors to Venezuela, and 50 doctors to Suriname. In all of these cases, the medical workers will be assisting in the fight against coronavirus. Miller told The Canary that the Jamaican delegation belonged to “the Henry Reeve Brigade, a group of doctors specialising in disasters and epidemics”.

Meanwhile, the brutal US blockade continues

Miller said that the current situation “once again highlights the stark contrast between Cuba and the disgraceful actions of the United States” as the latter continues to impose a devastating, decades-long blockade on the island. “At a time when the world community must pull together to share resources and knowledge in the fight against coronavirus, the US continues to implement its disastrous 60-year-old blockade of the island” Miller told The Canary. The blockade has prevented medical supplies from reaching the island as recently as February 2020.

Miller explained that the blockade:

stops companies and countries from across the globe from trading with Cuba and punishes those that do so with huge multi-million-dollar fines. The blockade seriously impacts across Cuba, affecting the daily lives of the people. The effects are most keenly felt across the hospitals and clinics where much-needed medicines and equipment are in short supply.

On 24 March, the UN High Commissioner for Human Rights called for the easing or suspension of sanctions against countries like Iran, Venezuela, North Korea and Cuba on the basis that “obstacles to the import of vital medical supplies, including over-compliance with sanctions by banks, will create long-lasting harm to vulnerable communities”.

Despite the blockade, Miller said, “Cuba prioritises its health services and delivers excellent results mainly through an extensive primary care programme”. He added:

At the same time, Cuba has developed a large bio-pharmaceutical industry to produce many of the medicines that it is not able to buy abroad. It has developed a number of medicines including an anti-viral medicine – Interferon Alpha 2B – that could save thousands of lives in the COVID-19 pandemic. The Cuban drug has been produced in China since 25 January and, so far, has managed to effectively treat more than 1,500 patients from the coronavirus there. It is one of 30 drugs chosen by the Chinese National Health Commission to combat the respiratory disease. It is now being used by many other countries including South Korea and Germany.

Miller also explained that Cuba’s current behaviour is part of a “long history of international medical solidarity”. This includes:

Cuba’s internationalism isn’t new either. In the 1970s, Cuba sent hundreds of thousands of troops and civilians to back Angola’s government against the invading US/UK-backed apartheid government of South Africa. These forces included doctors, teachers, technicians and construction workers. The country also aided Nelson Mandela’s African National Congress in its struggle against apartheid at a time when the UK and US governments both supported the white supremacist regime.

In more recent years, Venezuela has benefitted from the presence of Cuban doctors. The country has also suffered heavily under crushing US sanctions, which killed around 40,000 Venezuelans between 2017 and 2018 alone, according to one study. Around 8,000 Cuban medical practitioners were also working in Ecuador, Brazil and Bolivia until right-wing administrations took over the governments in those countries and ordered them to leave. In Brazil, however, the government recently made a complete U-turn, asking Cuban doctors to return after it realised it didn’t have enough local doctors to fill the vacancies.

The UK began its coronavirus lockdown on the night of 23 March, with the government calling upon the public to help “protect the NHS”. This is somewhat ironic given the 40 years successive Tory (and New Labour) governments have spent deliberately undermining Britain’s public health care system in order to ready it for full privatisation.

Today, a right-wing government has put evictions on hold, set aside competition laws so supermarkets can work together, and the public are being told to “think of others” when they shop. Maybe it’s worth considering right now just how much better societies are able to tackle adversity when people work together rather than competing to pursue what they think is in their short-term self-interest.

Miller told The Canary that “since the early days of the Cuban Revolution, the country has worked to help some of the world’s poorest countries with medical assistance”. This includes providing healthcare services “in over 160 countries across the globe”. But solidarity isn’t a one-way street. Perhaps it’s time the rest of us step up our game and do more to help Cubans end the suffering caused by the decades-long US blockade.