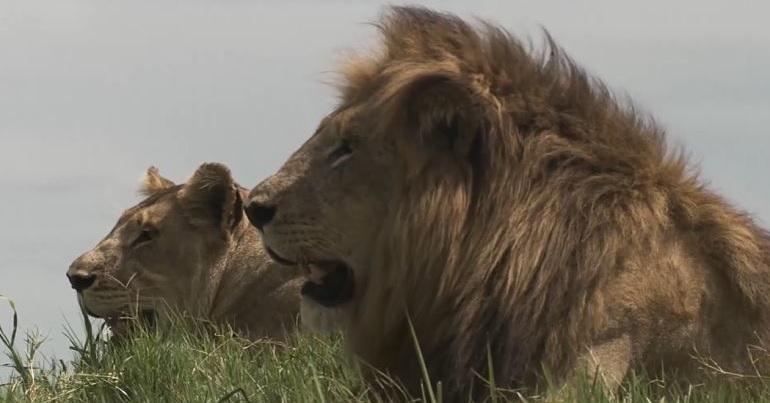 The South African government made a momentous move on 2 May. It released and endorsed a report that, as Don Pinnock explained in the Daily Maverick, calls for “the protection of iconic wild animals” to take priority “over the cruelty of commercial exploitation”.

The good news doesn’t end there either. The report’s recommendations relating to elephants and their ivory are also cause for celebration. The minister of environment, forestry and fisheries Barbara Creecy asserted that overall the report offers:

As The Canary has previously reported, South Africa has a large captive lion farming industry. A 2020 book claimed there are around 300 lion farms in the country, which breed the big cats. Every stage in the life cycle of these lions offers the opportunity for profit. As cubs, tourists and volunteers pay to pet and care for them. When they’re a little older, people pay to walk with them. Then hunters pay to kill them in so-called ‘canned’ hunts. Finally, the farms butcher their carcasses and sell their bones for traditional Chinese medicine, which people pay to consume.

It’s an industry that comes with substantial disease risks and has been dogged by scandals over the welfare of lions in captivity. As Pinnock has previously documented, South Africa has suffered serious reputational damage as a result of it. So the government’s embracing of the 580-page High-Level Panel (HLP) report essentially signals that the industry comes at a cost that’s too high to bear – both in terms of reputation and wildlife conservation. As the report states, the captive lion industry:

However, the report does endorse “responsible and authentic hunting” (whatever that means), so trophy hunting in general appears set to continue. It also leaves the door open for hunting of “ranched lions”. Pinnock says ‘ranched lions’ is a “uniquely SA definition not accepted by the rest of the world” and notes that:

The report also recommends that “as long as current specified circumstances prevail” South Africa should desist from submitting a proposal to the global wildlife trading body CITES on trading ivory. This recommendation is significant, too.

CITES banned international trade in new ivory around 30 years ago. However, a legal trade remained for older or antique ivory which has allowed the continuation of some international trade. CITES also provides effective exemptions for what it deems non-commercial and personal trade. So, for example, with the correct CITES permits, it’s legal for trophy hunters to kill elephants and take their ivory. CITES doesn’t regulate domestic markets, which can be substantial too. Some countries have, however, moved to largely shut domestic legal markets down.

In 1999 and 2008, CITES allowed so-called ‘one-off’ international sales of stockpiled ivory from Botswana, Zimbabwe, and Namibia. CITES added South Africa to the list of approved sellers for the 2008 sale. As the Revelator noted, the results were “disastrous” for elephants. Charan Saunders wrote that:

In his book It’s Not About the Bats, journalist and author Adam Cruise also noted that, according to the results of the 2016 Great Elephant Census, the continent’s elephant population “had declined by a third in the seven years since the second one-time sale”.

South Africa is one of a number of southern African countries that have advocated for increased international trade in ivory. As the East African reported, for example, South Africa and five other countries “resolved to lobby” CITES to “lift the embargo” on international trade in ivory in 2019. So the HLP report’s recommendation relating to ivory is important. As Cruise told The Canary:

This is a seismic shift in policy since SA was one of the leading proponents of trading in ivory internationally. With South Africa stepping back, it will undoubtedly take the wind out of the other proponents – Botswana, Namibia, eSwatini, Zambia and Zimbabwe

Cruise also highlighted efforts by the African Elephant Coalition (AEC) to secure all African elephant populations the highest protections within CITES, which would rule out the international trading of new ivory almost entirely. The AEC is a formal coalition that “includes 28 of the 36 African elephant range states”. Cruise said South Africa’s ‘stepping back’ on ivory:

may finally open the door for CITES to adopt the counter-proposals of the AEC calling for the full protection of all African elephants under Appendix I. Of course, it remains to be seen what ramifications this does have with the other proponents but it is indeed a very welcome development for African elephants.

As with all political pronouncements and policies, the devil will be in the detail – and the implementation. But the South African government’s endorsement of the report’s recommendations on the captive lion industry and international trade in elephants’ ivory is a most welcome start.