Venezuelan coup attempt leader calls for protests, but he might end up in prison before long - Canary Workers’ Co-op 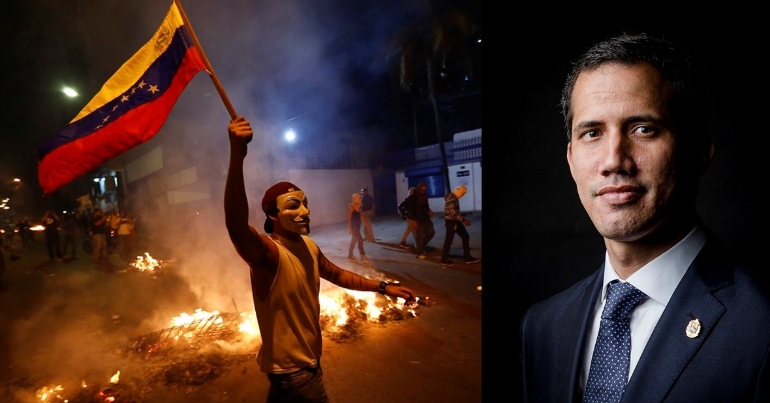 As The Canary has consistently reported, the US-backed coup attempt in Venezuela has been degenerating into an increasingly pathetic and embarrassing spectacle. Now, in one final gasp of desperation, Juan Guaidó has called for a fresh round of protests next month. But it looks like he and his dwindling band of followers’ hopes of toppling the government will soon be dashed. Because there are now growing calls for his prosecution for crimes including treason.

Washington and its mouthpieces in the corporate-owned media will surely crow that this somehow constitutes ‘proof’ of the Venezuelan government’s authoritarian nature. But the reality is that the US is, if anything, even less tolerant of the kind of behavior that its proxies in Venezuela have engaged in as part of their attempt to seize power.

Another call to the streets

On 23 January, Guaidó called on his supporters to hit the streets on 12 February to protest president Nicolas Maduro’s government. Guaidó has been the leader of an ongoing coup attempt since early 2019. In January of that year, then-US president Donald Trump declared him Venezuela’s ‘interim president’. In the early months of the coup, most of the US’s major Latin American and European allies recognized Guaidó as the country’s legitimate leader.

But as time went by, his support from abroad began to decline. As The Canary reported at the time, in January 2021 the European Union withdrew its recognition of his claim to power. Guaidó derived this claim from his position as leader of Venezuela’s legislature, the National Assembly. But because he and his party boycotted the National Assembly elections the previous year, he no longer even held a seat in the body. This therefore voided the premise behind his claim to power even on its own terms.

Pledge for peacefulness undermined by violent past

It’s in the context of this increasingly desperate situation that Guaidó has called for this fresh round of protests against Maduro’s government. He has indicated that the demonstrations should be peaceful. But his past involvement in violent street protests casts doubt on his sincerity.

In his younger years, Guaidó was a member of one of the street gangs that led the ‘guarimba’ protests. In 2014, these protests left over 40 people dead. Then in 2017 the ‘guarimberos’ returned. And, according to Dan Cohen and Max Blumenthal, they were responsible for “causing mass destruction of public infrastructure, the murder of government supporters, and the deaths of 126 people”.

But irrespective of the sincerity of his commitment to non-violence, Guaidó might soon find himself behind bars anyway. Members of the ruling United Socialist Party of Venezuela (PSUV in its Spanish initials) have been increasing their calls for Guaidó’s prosecution. During an event commemorating the overthrow of Venezuela’s general Marcos Pérez Jiménez’s murderous dictatorship in the 1950s, president Maduro assured supporters that “justice will definitely come”.

Meanwhile, a majority of PSUV National Assembly members have petitioned Venezuela’s attorney general to take action against Guaidó. He currently stands accused of treason and fraud by the Assembly’s Anti-Corruption Commission. And he also faces criminal charges of “treason, money laundering, embezzlement, and ties to Colombian-based paramilitary gangs”.

Like their puppet masters in Washington and cheerleaders in the corporate press, Guaidó and his supporters will also presumably characterize this as ‘proof’ of the Maduro government’s inherent authoritarianism. But it should be pointed out that though PSUV members are leading the calls for Guaidó’s prosecution, it’ll be Venezuela’s independent judicial system, not the government, that tries him. Moreover, there’s ample evidence to suggest that Guaidó is guilty of all the crimes for which he stands accused.

To take the most obvious example, colluding with a hostile foreign power (the US) that’s imposing unilateral sanctions on his own country (in flagrant violation of international law) seems a cut-and-dry case of treason. The sanctions have been responsible for the deaths of over a hundred thousand people. Yet Guaidó continues to use them as a bargaining chip in negotiations. He recently said during an interview with Reuters, for example, that the offer to withdraw sanctions as part of a peace deal with the government “is not indefinite”.

This kind of behavior is criminalized in most countries, not least in the US where treason is a capital crime. The fact that Guaidó has largely continued his coup attempt unmolested by Venezuelan authorities shows that, if anything, Venezuela is more tolerant of political dissent than the US. After all, given all the fuss over (alleged) Russian influence in the 2016 US election, we can see how powerbrokers in Washington do not tolerate even comparatively minor (alleged) interference in their own country’s internal affairs.

There’s also considerable evidence to support the charges of fraud and embezzlement. As The Canary has extensively reported, Guaidó attempted to get access to gold belonging to the Central Bank of Venezuela that was being held by the Bank of England. The Bank of England unilaterally froze the assets on the bogus grounds that Maduro was no longer Venezuela’s rightful leader. Maduro’s government is currently taking legal action in the UK to recover these stolen assets.

Likewise, evidence to support charges of ties to Colombian paramilitaries is substantial. In September 2019, the Guardian reported:

Juan Guaidó, the Venezuelan politician fighting to topple Nicolás Maduro, is facing awkward questions about his relationship with organised crime after the publication of compromising photographs showing him with two Colombian paramilitaries.

Clearly, the days Guaidó has left to continue this ridiculous charade are numbered. It may not be long before he finally faces justice for his murderous and destabilizing coup attempt – one that’s plunged Venezuela into ever-greater chaos and turmoil.

Featured image via Flickr – DJANDYW.COM AKA NOBODY and Wikimedia Commons