Met police pay compensation to Spycops victim, but justice is yet to be served - Canary 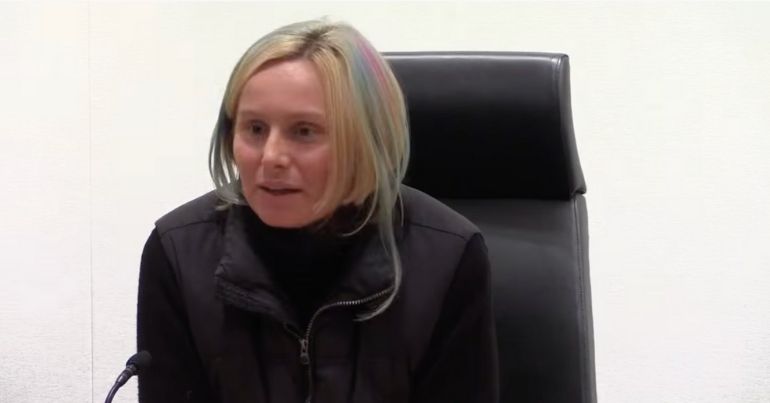 On 25 January, the Investigatory Powers Tribunal (IPT) ordered the National Police Chiefs’ Council and the Metropolitan Police to pay just under £230k, including payment of legal costs, to political activist Kate Wilson. This was for the breach of five of her human rights.

But justice is far from being served.

In her own words

The perpetrator of this abuse was married police officer Mark Kennedy, who used the undercover name ‘Mark Stone’. Kennedy formed a long-term and intimate relationship with Wilson, who was unaware of his police role, in order to spy on other activists.

Here is what happened to Wilson in her own words.

She also explained what happened in this video:

The police have described the sexual relationships formed by Kennedy as “abusive, deceitful, manipulative and wrong”, and a “gross violation of personal dignity and integrity” that “caused significant trauma”. And the Met admitted that relationship abuse by undercover officers equated to torture.

Kennedy also had a long-term intimate relationship with ‘Lisa Jones’, as well as with ‘Naomi’ and Sarah Hampton.

Kennedy is known to have spied on several protest groups, most of which were environmental groups. As well as England, his undercover work took place in several other countries including Scotland, Northern Ireland, Germany, Denmark, France and Iceland.

Wilson believes the compensation awarded was also in regard to “how complicit Mark’s managers were, and the role of 5 other undercover officers in violating my political rights”.

Known UCOs are also listed by the Undercover Research site and Powerbase. Names and photos of some of the UCOs are given in this video:

In 2015 the Met apologised to eight women for their abuse by UCOs and the violation of their human rights.

Role of the police supervisors

(ii) MK’s sexual relationship with the Claimant was conducted with the knowledge of his principal “cover officer”;

(iii) MK’s deployment manager, who had the rank of Detective Chief Inspector, knew or turned a blind eye to the sexual relationship;

(iv) Other senior officers of the rank of Detective Chief Inspector or above who had operational and managerial responsibility within the National Public Order Intelligence Unit (“NPOIU”) for MK’s deployment either knew of the relationship, chose not to know of its existence, or were incompetent and negligent in not following up on the clear and obvious signs that MK had formed a close personal relationship with the Claimant which might be sexual in nature;

(v) There is no evidence to support a finding that UCOs having sexual relationships was a deliberate tactic of the NPOIU. The true position is closer to being one of “don’t ask, don’t tell’. [Emphasis added]

In September 2018, journalist Rob Evans had reported that:

Also in September 2018, The Canary revealed the names of Kennedy’s supervisors, derived from confidential police files which it had seen.

The Met previously admitted that undercover officers had “abusive and deceitful” relationships with at least 12 women, including Wilson.

As previously reported by The Canary, “over 30 women were deceived into having relationships with undercover police officers. These spies also fathered, then abandoned, children with some of the women”. More ‘spycops’ who used sex to gather intelligence have been named.

Meanwhile, PSOOL points out there are a number of civil claims currently being brought “against The Commissioner of Police for the Metropolis“. Other cases are expected.

The UCO scandal is not about history but is ongoing. As The Canary‘s Eliza Egret pointed out:

And if that isn’t horrific enough, the new Police, Crime, Sentencing and Courts Bill, which is passing its final phases in parliament, will give the state extensive new powers.

Furthermore, in May 2019, the Crown Prosecution Service reportedly decided that no UCO would be prosecuted for “having non-consensual sexual relations with any member of the public”.

Wilson also commented on how the police are institutionally sexist:

I am one of many dozens of women deceived into this kind of relationship by deployed undercover police officers. They used sex with women to gather ‘intelligence’. The evidence suggests a ‘don’t ask, don’t tell’ approach by senior officers embedded in a culture of misogyny and mission creep. I have no doubt that the police are institutionally sexist.

Meanwhile, the official inquiry into undercover policing will likely drag on for years, despite parallel legal actions.

In July 2018, 85 non-state core participants to the inquiry, including Wilson, issued a list of demands including:

full disclosure of all names – both cover and real – of officers from the disgraced political police units, accompanied by contemporaneous photographs

Justice will only be served when that and their other demands are fully met; as well as naming the supervisors who oversaw the abuse.