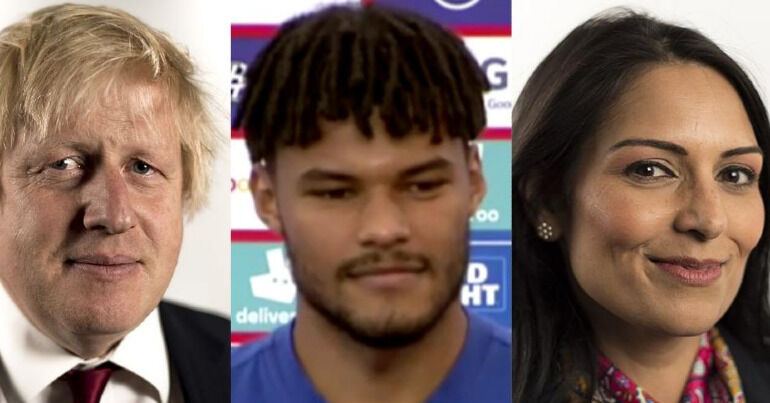 The disgusting racism that followed England’s Euro 2020 final isn’t just proof that football is racist. It’s yet more proof that the UK itself is institutionally racist at all levels. And it shouldn’t have to fall upon young Black footballers to point this out, but this is exactly what’s happening.

The Tory government continues to do what it is does best. It gaslights the nation, pretends to be disgusted by racism, and all the while actively allows racism to thrive. Priti Patel previously encouraged racist football fans when she said that it’s “a choice” for them to boo players who were taking the knee before matches. And yet she had the audacity to argue that racism “has no place in our country” after the Euro 2020 final. England player Tyrone Mings called out Patel on social media, arguing:

You don’t get to stoke the fire at the beginning of the tournament by labelling our anti-racism message as ‘Gesture Politics’ & then pretend to be disgusted when the very thing we’re campaigning against, happens. https://t.co/fdTKHsxTB2

What? No racism here!

In March 2021, the government commissioned a review into racism. Unsurprisingly, it declared there was no evidence that it was institutionally racist. Britain’s right-wing press had a field day, with the Daily Mail calling it a “race revolution“.

Put simply we no longer see a Britain where the system is deliberately rigged against ethnic minorities.

In fact, the report put the blame squarely on BAME communities, saying that people of colour won’t overcome “obstacles” if they:

absorb a fatalistic narrative that says the deck is permanently stacked against them.

Even so, we have a home secretary who calls Black Lives Matter protesters “thugs“, who is in the process of introducing a law that would imprison people for up to ten years for damaging statues. This same home secretary is passing through yet another bill to enable the state to imprison refugees for up to four years.

We have a prime minister who has made so many racist comments there are too many to list here. To summarise a few of his nasty words, in 2002 Johnson described people living in the Congo as “tribal warriors” with “water melon smiles”. He continued his racist drivel, calling Black people “piccaninnies”. In 2005, he wrote one of the most venomous Islamophobic articles ever, harping on about suicide bombers and their ‘rations’ of “virgins”, saying “Islam is the problem”. In 2018, he said Muslim women wearing the burka looked like “letter boxes“.

We allowed this man, with his poisonous tongue, to be voted in to lead the country. And we allowed this man to appoint others like Patel who would continue to implement the Tories’ hostile environment policies. These people are now also trying to push through laws that will imprison those who take a stand against racism.

Of course, it isn’t just our leaders that are the problem. Institutional racism exists at all levels.

BAME people disproportionately die at the hands of the police, and police officers are rarely held accountable. In June 2020, PC Benjamin Monk was found guilty of the manslaughter of ex-footballer Dalian Atkinson. But disgracefully, this was the first time in 35 years that a UK police officer had been found guilty of murder or manslaughter following a death in police custody or contact.

And as reported by The Canary’s Sophia Purdy-Moore:

Black people make up around 3% of the UK population, but they account for 8% of deaths in police custody. According to 2019/20 data from HMICFRS, police are over 5 times more likely to use force against Black people than their white counterparts. They are 9 times more likely to draw tasers on Black people. Tasers – which deliver a high-voltage electric shock – can cause severe physical and mental harm.

Institutional racism can also been seen in the way that the police handle different events, from the Euro final to Black Lives Matter protests. Hundreds of ticketless fans easily stormed Wembley on 11 July, taking up seats and crowding into the disabled viewing area. Inside the stadium, footage showed football fans beating up some of those who broke in and repeatedly kicking a person of colour in the head. There’s barely a police officer in sight.

Compare this to the policing of the 2020 Black Lives Matter protests. Network For Police Monitoring found that Black protesters were disproportionately targeted by police using batons, horses, violent arrests, and pepper spray. Protesters were held for up to eight hours in ‘kettles’ with no access to water or toilets. On top of this, the police failed to stop violence from racist counter-protesters.

And let’s look at the policing of recent Bristol demonstrations. Bristolians came out in their thousands to protest the racist Policing Bill which will enable the state to imprison those who damage statues, and which could imprison Gypsy, Roma and Traveller communities for trespass. Police were brought in from all over the country to crush any resistance on the streets. Officers on horses charged at people, while lines of police crunched their riot shields down onto protesters’ heads, and police dogs hospitalised people. At least 65 people have been arrested since March.

It’s clear that whenever people rise up to resist white supremacy, they will be crushed by a state that is sustained by the status quo.

It’s up to all of us

There’s many other ways that institutional racism manifests in our society. One stark example is the way that the pandemic has disproportionately affected BAME people. They are more likely to be exposed to coronavirus, become severely sick from it, or die. The reasons for this are numerous, and are squarely the government’s fault: poverty and inadequate housing, having to work in higher-risk jobs while the middle classes are able to sit at home on their laptops, and a hostile environment which makes health care impossible to access for people without papers.

So let’s stop asking the question, “Is Britain a racist country?” There’s no question that it is. And it shouldn’t just be down to young Black footballers to point this out. It’s up to all of us to call out racism, whether it be online or in person. If you’re white, remember that you’re in a position of privilege. You might feel discomfort at challenging racism, but you need to step up if we’re going to change society.

After all, white silence is violence too.