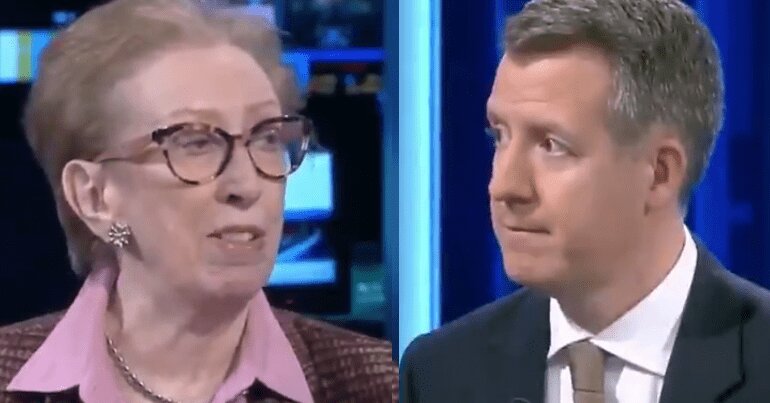 Walked straight into it

Leslie, now a member of a new centrist parliamentary faction, was trying to blame Corbyn for the Brexit mess:

Now isn’t the time for petty party politicking if the national interest is at stake. He’s got be grown up…

But, given Leslie has just splintered from Labour, he walked right into the dogshit. Beckett replied:

I agree, Chris, that this is the time for national interest, which is why people like you should have stayed where you were.

Independent Group are not a party. In a cheap stunt Theresa May broke the terms of tonight's meeting. Corbyn absolutely right to walk out. Chris Leslie cynically tries to politicise this. Margaret Beckett puts him straight. pic.twitter.com/aqt42mgj1Y

Leslie and Beckett were discussing Corbyn refusing to take part in May’s talks. The Labour leader left the meeting after finding the Independent Group’s (TIG) Chuka Umunna was present. TIG is not actually a political party, but a limited company occupying seats in parliament without having won any elections under its banner.

On Sky, Leslie, whom local Labour members voted no-confidence in before he defected, claimed:

The fundamental problem is that we are not very well served by the leaderships of our main political parties right now. We’ve got a situation where there are good backbenchers trying their best to find a way through, proposing solutions. But when you have ideologies that have gripped our political parties so firmly…

The MP for Nottingham East seems unfazed that Theresa May took executive control over the negotiations. She sidelined parliament at every stage, resulting in MPs finding May’s administration in contempt of parliament in a historic first.

Beckett cuts through the bollocks

In response, Beckett cut through what looked like an establishment charade:

I don’t suppose they were invited for any other reason than to try and bring about such a result. Jeremy is perfectly right; he is in a completely different position to members of the Independent Group.

It’s a matter of the way you go about it. It’s been perfectly clear all the way through. The prime minister is not the slightest bit interested in having cross-party and cooperative talks. Otherwise she would have done it a long time before now.

The meeting with Theresa May and opposition leaders, quite predictably, resulted in nothing. No concessions. Just a re-statement of May's twice-defeated-by-huge-majorities position. Meanwhile, some particularly moist cupcakes are mostly upset that Corbyn left.

Only after MPs defeated May’s deal by the greatest margin ever in January did the prime minister first invite opposition leaders for talks. And she only phoned the leaders of the two largest unions a week before. That’s almost two years since parliament triggered Article 50 – the process for leaving the EU. And May still remains committed to her red lines and the ‘no-deal’ threat, rendering a compromise impossible. With that in mind, Corbyn branded the offer for talks in January “simply a stunt”.

The media has found *another* fatuous talking point regarding a meeting where Theresa May had no intention of honestly negotiating with other parties.

March 29th is next Friday.

The Labour leader has long offered a Brexit compromise that could move the UK forward. The plan has support from the public, the EU and could command a majority in parliament. It’s not a stroke of genius, but the obvious solution to the deadlock: a new customs union to solve the Irish border issue and strong single market access.

By contrast, May has only dealt in childish political game playing. She has refused to compromise on a ‘softer’ Brexit, in line with the position of her hard-Brexiteer rivals in the Tory party.

Extraordinarily, Leslie, the centrists and the corporate media are still trying to blame Corbyn for this. So Beckett quite rightly put him in his place.