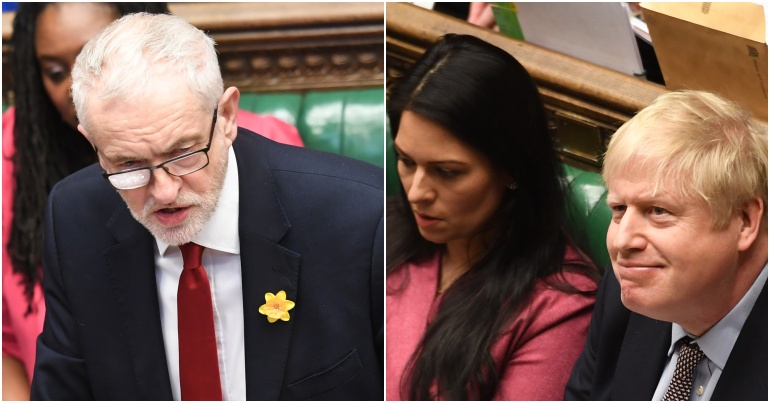 On 4 March, Jeremy Corbyn destroyed both Boris Johnson and home secretary Priti Patel during Prime Minister’s Questions (PMQs). It only took him one sentence to nail what many are thinking about Johnson.

Patel is facing new allegations of bullying staff in a third government department. This came after the Home Office’s “top civil servant” Philip Rutnam quit on 29 February. As The Canary reported, while Rutnam’s not someone to celebrate, he made a number of serious allegations against Patel. The Telegraph also reported that one “civil servant allegedly attempted to kill herself after being bullied” by Patel during her time as employment minister.

On 2 March, Corbyn asked an urgent question about Patel’s conduct. In response, Johnson has tasked the Cabinet Office with investigating the allegations.

Corbyn challenged Johnson about the impartiality of this. He asked the PM:

whether he will release the findings of an investigation into the home secretary’s behaviour… A government cannot be judge and jury over its own conduct. There has to be an independent element to that investigation.

Corbyn went on to say that if the “allegations” against Patel are “true”:

This suggests a shocking and unacceptable pattern of behaviour across three government departments. On each occasion, tens of thousands of pounds – of hard-earned taxpayers money – has been spaffed up the wall to buy their silence.

And he also laid down a direct challenge to Johnson asking if he was “aware of these allegations and if he was, why did he appoint” Patel as home secretary?

We have a part-time prime minister who barely turns up but is determined to cover up for bullies in his government.

As he spoke, Johnson’s and Patel’s faces said it all.

Corbyn was absolutely spot on. Because, as the number of UK coronavirus cases rose, many slammed Johnson for his government’s slow response. And let’s not forget this also came during a fourth weekend of severe weather in the UK, with the PM largely nowhere in sight.

Perhaps this is no surprise though. After all, this is the man who also hid from reporters in a fridge during the 2019 general election. And in January, as an international crisis mounted after US drone attacks killed Iranian general Qasem Soleimani, Johnson was AWOL again. He failed to provide a timely response to Corbyn’s critical questions about the growing crisis and stayed on holiday in Mustique “sunning himself, drinking vodka martinis”.

Now this “part-time prime minister” is defending someone with three serious allegations of bullying and a truly disturbing track record in office.

Day by day, the Conservatives just get worse.