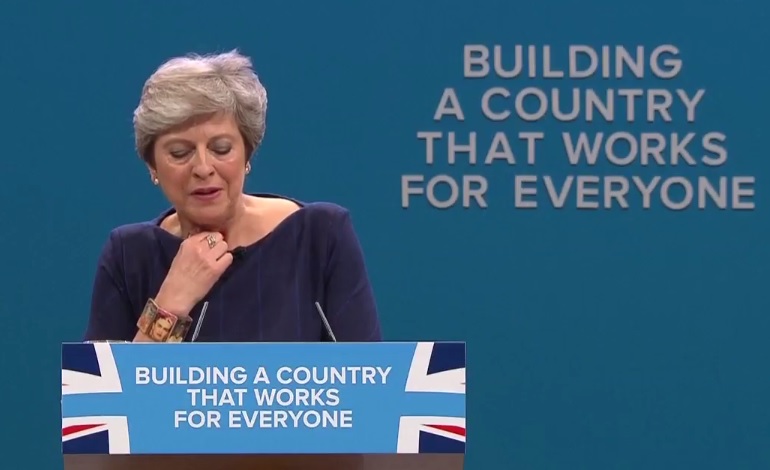 The Conservatives’ new reason for Theresa May’s humiliating speech would make Kim Jong-un blush. During the Prime Minister’s flagship conference speech, letters gradually began falling from the slogan behind her. Eventually, ‘Building a country that works for everyone’ became:

Theresa May: Building a country that works for everyone…
But the sign behind her lost letters as she spoke #brexitshambles pic.twitter.com/XvdFSDkX7h

But Conservatives have offered a reason for May’s speech that’s so “inspired” it led some to joke that “even the North Korean News Agency would have to applaud”. The Times [paywall] reports that party sources:

The suggestion here is that the letters fell because the speech was too fantastic.

Meanwhile, wall-to-wall UK front pages have denounced her speech as a “shambles”, “nightmare” and “farce”. May was also interrupted by a prankster who handed her a P45 mid-speech.

In fact, standing ovations from the party faithful clearly appeared to be an attempt to cover up May’s coughing fits, rather than a show of excitement about her policy announcements.

On the substance, May nicked many of her new policy offers from Labour. She announced that everyone will automatically become an organ donor after death because thousands of people are on waiting lists. Just a week before, Jeremy Corbyn made the very same announcement at the Labour conference.

Since May delivered her speech, the jokes have been unforgiving:

A day after seeing Theresa May publicly embarrass herself, on a purely human level you have to say that it's still very very funny indeed.

By the looks of the conference, it really does seem like the beginning of the end for the Conservatives. But Labour has also been consistently ahead in the polls since the general election.

In fact, Labour activists are now debating how permanent powers such as the civil service, the intelligence services and big business will react to a Corbyn-led government. There could well be a heavy backlash. Indeed, the Chancellor has attempted to instruct business leaders not to “collaborate” with Labour.

We have a real and imminent possibility of a Labour government. So no wonder Conservatives are coming up with reasons for their failings that are worthy of North Korea.