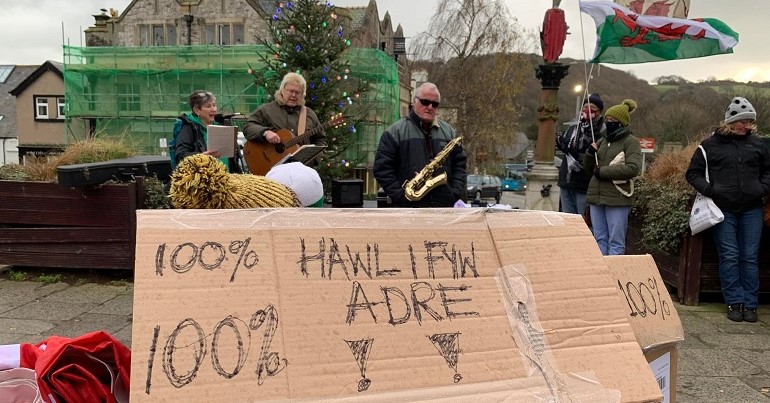 A lack of affordable housing in Wales is pushing people into homelessness. The Welsh independence movement UNDOD reported that in 2018 and 2019 nearly 12,000 households became homeless in Wales. In May, The Canary reported that second home ownership in Wales is making housing unaffordable. And the root cause is a neoliberal housing policy in Wales and the UK.

Some councils in Wales are taking action by increasing the council tax premiums on second homes. These premiums are a levy paid in addition to and as a proportion of council property tax. The hope is that this measure will bring more properties back into use and therefore make housing more affordable. However, on 15 November a Conwy Council working group recommended that premiums for second homes remain at 25%. This would mean a reversal of a previous determination to increase these premiums to 50%. Conwy councillors then voted to keep premiums at 25%.

So on Saturday 4 December, Welsh language and community campaign group Cymdeithas yr Iaith (CYI) organised a picket in Conwy in the north of Wales. The campaign group wants to pressurise the local council to increase second-home premiums by 100%. One of the picket organisers Osian Jones said:

The high proportion of second homes in the county [Conwy] and housing being bought as investments is depriving many of our young people of the right to a home in their own community, and we are rapidly losing Welsh-speaking communities. This is immoral, unjust and puts the benefits of second home owners above people’s rights to live in their communities.

Dealing with the crisis

In May, an UNDOD housing campaigner told The Canary that parts of the north of Wales have been “really badly affected by the housing crisis”.

The Canary also reported that on 25 August 2021, the Welsh government launched a consultation on how second homes had led to a housing crisis in Wales. CYI claimed that this consultation was “patronising” and downplayed the seriousness of the housing crisis. Additionally, CYI said it needed more “radical steps” to deal with this crisis.

As Golwg360 reported, some Welsh councils have taken steps to make housing more affordable. One such step is increasing the council tax premium on second homes. This could encourage second home owners “to bring empty properties back into use”. And this, in turn, could lead to an increase in affordable housing. Gwynedd and Pembrokeshire councils have already raised the council tax premium by 100%. And Anglesea is considering raising its premium further. Gwynedd and Anglesea are also in the north of Wales.

The protest comes only days after Plaid Cymru and Welsh Labour made a “cooperation agreement” to govern Wales for the next three years. This agreement pledges to deal with the housing crisis. And it specifically says it will:

Take immediate and radical action to address the proliferation of second homes and unaffordable housing, using the planning, property and taxation systems.

It also plans to:

Establish Unnos, a national construction company, to support councils and social landlords to improve the supply of social and affordable housing.

So the plan, at least at a national level, is about providing affordable homes. And it’s also about tackling the problems caused by second home ownership.

Deprived of the right to own a home

CYI is also calling on the Welsh government to create a property act during this Senedd (Welsh parliament) term. And as there will be local elections in May 2022, Jones has vowed to keep up the pressure on councils to:

ensure that this issue becomes a major issue, and we will particularly target the Conservative Party which has shown, here in Conwy and nationally, that they represent the privilege and power of money over people’s need for a home.