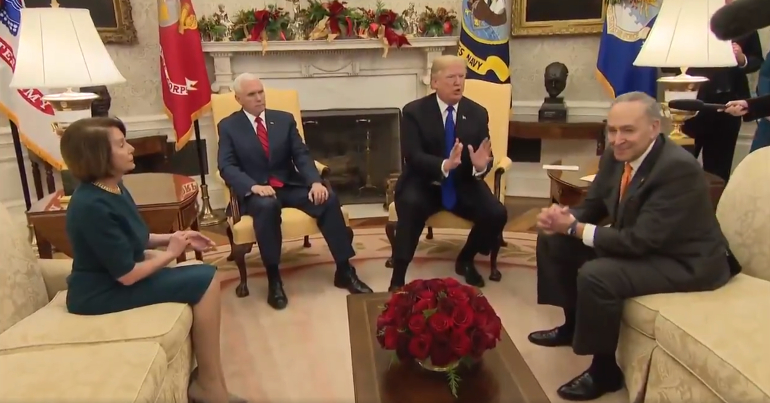 Following their recapture of the House of Representatives in November’s mid-term elections, Democratic Party leaders have held talks with Donald Trump. But while they stood their ground against some of his policies, they failed to call him out on one of his biggest and most destructive lies.

On 11 December, Nancy Pelosi and Chuck Schumer met with the president and vice president, and the White House talks were televised and streamed on social media.

Pelosi is almost certain to become the speaker of the House of Representatives now that the Democrats have a majority. Schumer, meanwhile, is the minority leader in the Senate, where Republicans still have a majority.

The meeting was ostensibly about discussing potential areas of cooperation between the two branches of government. But instead, it degenerated into what some commentators described as a ‘shouting match’ over Trump’s proposed wall along the Mexican border.

Schumer may have disagreed with shutting down the government, but he and Pelosi then left one of Trump’s favorite right-wing populist talking points completely unchallenged. Trump said:

The people of this country don’t want criminals and people that have lots of problems – and drugs – pouring into our country.

And rather than calling Trump out for this flagrant ethnic stereotyping and fearmongering (for which he has long failed to provide evidence), Schumer simply said: “But we believe you shouldn’t shut it down”. He then just looked away.

JUST IN: "I am proud to shut down the government for border security … I will take the mantle. I will be the one to shut it down. I’m not going to blame you for it," President Trump tells Senate Minority Leader Schumer in the Oval Office. pic.twitter.com/xN0ebjJMJv

The facts that Schumer and Pelosi could, and should, have highlighted

Trump has used this kind of racist fearmongering before. He and his allies in the right-wing media have regularly been exploiting high-profile criminal cases involving illegal immigrants to push their racist agenda. They’ve presented the charging of (alleged) illegal immigrant Cristhian Bahena Rivera in the murder of Mollie Tibbetts, for example, as the tip of the iceberg in a purported immigrant-driven crime wave. And earlier this year, Trump held a rally in which families of children (allegedly) killed by (again, alleged) illegal immigrants held up pictures of the murdered children.

But behind this posturing lie some inconvenient facts. For one, the idea that immigrants commit more crimes than US citizens has been roundly debunked on numerous occasions. Though many Americans believe so, four independent studies have shown that this is not the case. In fact, according to research by the Cato Institute (which is right-leaning), immigrants actually commit less crime than “native-born citizens”:

Using Trump-logic, we must remove all Native Born Americans from this nation ASAP.

In fact, it is almost three times as urgent as his drive to remove undocumented immigrants, according to this crime chart.

And, of course, some of Trump’s own narratives are misleading even on their own terms. Some of murdered people whose families held signs at his rally, for example, were actually killed in motor accidents involving an immigrant.

By now, we expect Trump and his allies to peddle hateful nonsense. But there’s something just as alarming. And that’s the complete failure of Pelosi and Schumer to speak up.

We shouldn’t be surprised, though. Because this unwillingness to challenge Trump’s bigoted narrative is indicative of a wider failure of the establishment wing of the Democratic Party to resist his agenda in any meaningful way. In some cases, establishment Democrats have even been complicit. Schumer, for example, was fully behind Trump’s destructive and much-criticised decision to move the US Embassy in Israel to Jerusalem. In fact, he openly praised it.

The failure to challenge Trump’s anti-immigrant lies is simply one more sign of the utter uselessness of establishment Democrats. Only by reforming the party into a social democratic and anti-war force – through the elevation of genuine progressives like Bernie Sanders and Alexandria Ocasio-Cortez – can a true alternative to Trumpism emerge.