Top US official tries to smear Corbyn, but accidentally hands him 'a gift' instead - Canary 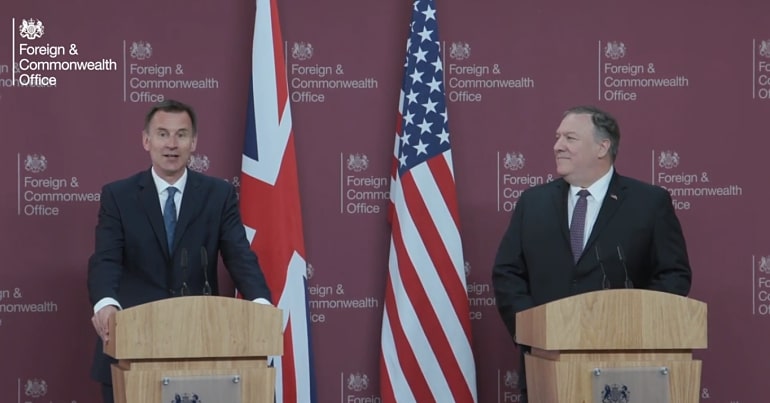 On 8 May, UK foreign secretary Jeremy Hunt held a joint press conference with US secretary of state Mike Pompeo. During the conference, the ex-CIA chief launched an apparent tirade against Jeremy Corbyn’s principled anti-imperialist position on the ongoing coup attempt in Venezuela. But given Pompeo’s terrible record of sucking up to dictators, some saw his attack on Corbyn as a “gift”.

Pompeo said “it is disgusting to see leaders [read Corbyn]… who continue to support the murderous dictator”, referring to Venezuela’s elected president Nicolás Maduro. In recent months, the US and its allies have been trying to overthrow Maduro (so far unsuccessfully).

Hunt then jumped in, claiming that shadow chancellor “John McDonnell describes [the situation in Venezuela] as ‘socialism in action’; and I think people need to draw their own conclusions about what his own plans might be for the UK”.

When Jeremy Hunt and one of Trump's bezzie mates, Pompeo, agree that your refusal to condemn Mr Maduro is 'disgusting', you KNOW you're doing something right.

Scared we're coming for you boys? You're damn right we are✊#JC4PM2019 pic.twitter.com/dMW4x9U7Rd

But the problem for Pompeo and Hunt lay in their own (very poor) reputations, and in the reality of what Corbyn and McDonnell have actually said.

Corbyn opposes “outside interference” in Venezuela. On 1 February, he tweeted:

Far from support for Maduro, this stance is a defence of the Venezuelan people’s right to self-determination. And that’s before considering that Maduro was democratically elected in 2018.

Shadow chancellor John McDonnell, meanwhile, did claim in 2014 that Venezuela represented a “contrast between capitalism in crisis and socialism in action”. But he then spoke about the country again in 2018, saying:

I don’t think it was a socialist country. I think what happened was [former president Hugo] Chávez was developing policies which I think would first of all tackle the poverty…, raising literacy rates, and then investing in the economy using their oil wealth to do that.

I think it took a wrong turn when Chávez went, and… unfortunately since then I don’t think they’ve been following the socialist policies that Chávez was developing.

These statements aren’t particularly controversial. In fact, even a CIA fact-sheet on Venezuela explains that:

Social investment in Venezuela during the CHAVEZ administration reduced poverty from nearly 50% in 1999 to about 27% in 2011, increased school enrollment, substantially decreased infant and child mortality, and improved access to potable water and sanitation through social investment. “Missions” dedicated to education, nutrition, healthcare, and sanitation were funded through petroleum revenues. The sustainability of this progress remains questionable, however, as the continuation of these social programs depends on the prosperity of Venezuela’s oil industry.

“A gift to Corbyn”

1) a top Trump official calling Corbyn ‘disgusting’ is a gift to Corbyn, regardless of where you stand on Venezuela.
2) how ‘disgusting’ is it that Pompeo was yukking it up with the Saudi Crown Prince only weeks after he had a US-based journalist murdered and dismembered? https://t.co/8tRPhVzTXJ

Indeed, both Pompeo and Hunt are presiding over “the world’s worst humanitarian crisis” in Yemen. And in August 2018, the coalition arming and assisting Saudi Arabia’s war on Yemen “rejected a UN report which said some of its attacks may amount to war crimes”. In the words of Bruce Riedel, a CIA veteran and former Middle East adviser to four presidents:

If the United States of America and the United Kingdom, tonight, told King Salman, ‘This war has to end,’ it would end tomorrow. Because the Royal Saudi Air Force cannot operate without American & British support.

In April, meanwhile, Pompeo revealed that, as CIA director:

We lied, we cheated, we stealed [sic]… stole. We had entire training courses.

So Pompeo is no moral authority – on anything. And nor is Hunt, who – like Pompeo – is more than happy to cosy up to war criminals.

Destroying Venezuela, and using it as a stick to beat the left with

The US and British governments bear significant responsibility for the current economic crisis in Venezuela, through crippling sanctions and freezing assets. A recent academic paper, meanwhile, argued that US sanctions have killed around 40,000 Venezuelans since 2017.

Not happy with just worsening Venezuela’s economic crisis, Pompeo and Hunt are also using the suffering of ordinary Venezuelans as a stick to try and beat the US and British left. This is a deeply cynical ploy. And the left’s response must be greater solidarity with the Venezuelan people.