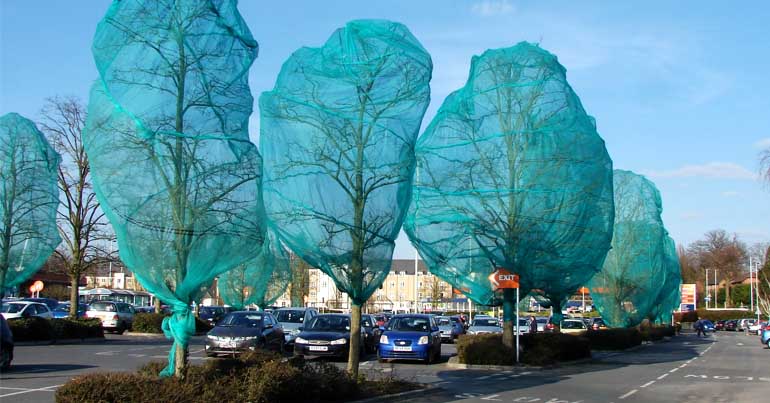 MPs debated the impact and legality of anti-bird netting on 13 May. Anti-netting campaigners welcomed the debate, which came after a petition gained more than 355,000 signatures. But the way it ended left campaigners absolutely fuming.

Labour MP Mike Hill led the cross-party debate on netting. Developers use the practice to prevent birds from nesting in their chosen location such as trees, hedgerows, rafters and cliffs. Interfering with already-nesting birds is illegal under the Wildlife and Countryside Act 1981. So developers get around this law by putting up nets that stop birds from being able to nest in the first place. But conservationists and other wildlife advocates have condemned netting for seriously disrupting birds’ natural breeding patterns. Furthermore, as Hill said in his introduction to the debate:

the issue goes well beyond the detrimental effect of netting on nesting birds; netting affects the wellbeing of other wildlife, as well as having environmental consequences.

The debate took place after a petition on the government’s website reached more than 355,000 signatures. The debate noted this display of public concern. Conservative MP Cheryl Gillan, for example, said that more than 1,000 of the signatures came from her constituency alone and this reflected a “great concern” for the environment. And Hill described the petition as having “raised plenty of interest… and strong feelings”.

Agreement across the floor

MPs across political lines broadly agreed with the sentiment of the petition. Liberal Democrat MP Norman Lamb highlighted the use of netting on cliffs in Bacton, north Norfolk, and emphasised the need for “close collaboration” between councils and groups such as the RSPB to “absolutely properly… protect birds”. Meanwhile, SNP MP John McNally said that his “feeling is that this practice is in no way acceptable”. And Luke Pollard, a Labour Co-operative MP, said:

this cruel practice needs to be stopped and… measures need to be taken to discourage not only developers but… the public sector and public organisations from using this practice.

Labour’s Diana Johnson said MPs must “look seriously at ending the practice of netting, but we must also think beyond that” due to its symbolic place in wider concerns about destruction of the natural environment. And even Conservative MP Hugo Wire said a “ban [on] netting during the breeding season” would be worth considering despite being against further-reaching legislation.

Gillan also raised an important secondary issue: HS2. The high-speed rail link has been criticised for its harmful impact on the environment. Its construction has also made use of netting. HS2 said netting used during its construction is monitored daily. But Gillan said she wasn’t “entirely convinced that those nets will be monitored on a daily basis”. And she asked why HS2 couldn’t at the very least complete its tree and hedgerow removal “outside the nesting season”.

Many people and groups responded positively to the debate, citing MPs’ understanding of issues raised by anti-netting campaigners:

Our concerns about hedgerow #Netting were shared by MPs in a debate yesterday. "We cannot keep trying to squeeze nature into smaller and smaller spaces or demanding it fits in with our plan". @CherylGillan https://t.co/SJVPkKnbEk @CPRE @rspb @WoodlandTrust
@TheTreeCouncil

I'm really enjoying this folks!! #Nestnotnets #Netting #Parliamentary Debate "This is precisely the sort of headlines we do not want to read about themselves" #VolumeHouseBuilders

However, the way the debate wound up left many people angry:

Huge thanks today to @DianaJohnsonMP Bill Grant, @JohnMcNallyMP @JennyChapman @CherylGillan @KerryMP & others that attended the debate on netting today.
Shame the response from @HeatherWheeler at the end let us all down.

Let's remind ourselves on the day the Government refused to respond positively to two netting petitions what happened to #SaveTheBactonSandMartins on the #CliffsofShame @NetsNot @EDP24 @nthnorfolknews We will get #NetsDownForNature pic.twitter.com/bM8xg94zAY

Margaret Moran, who started the petition, was also disappointed by how the debate turned out:

What happened to cause this sudden change in tone?

And it was Wheeler’s pushing back of changes to an indeterminate future point that angered people:

Everyone in the room agreed netting is bad & it all seemed 2B going in the right direction until the tory minister spoke-obviously couldn't care less,the building companies R more important & when asked when law wld B brought in she replied in due course which prob means never

Very convenient. Mollify 1/3rd Million people who signed the Petition 2 address #injustice Lip service! Then fail to Act. Words are worthless. Petitions serve a purpose. Hold to account. If seen 2 be ineffective People will turn to other methods. Not good! 😱

While this debate on netting has ended, public interest in the subject is far from over. Netting has been used for increasingly bizarre situations, including recent photos showing an entire Cumbrian farmhouse apparently covered in it. As Hill noted in his introduction, netting harms more than just birds. And, because it’s a very visible practice, it’s become a figurehead subject for the way that humans are treating the natural world. As Stewart Abbott, who has helped pushed awareness and action on netting, said, the real issue is “wildlife always coming 2nd”.

On 1 May, the government agreed a non-binding motion to declare a climate emergency. Yet when it comes down to actually acting on this declaration, the government appears deaf to the meaning of “emergency”. Both the World Wildlife Fund and UN have warned about biodiversity across the globe being destroyed by human activity. And this includes the UK, where one in 10 wild animal species faces extinction.

Netting could have been an easy ‘win’ for the government whilst benefitting dozens of species across the UK. Its heel-dragging on the issue, much like netting itself, is symbolic of the government’s two-faced attitude towards the environment.