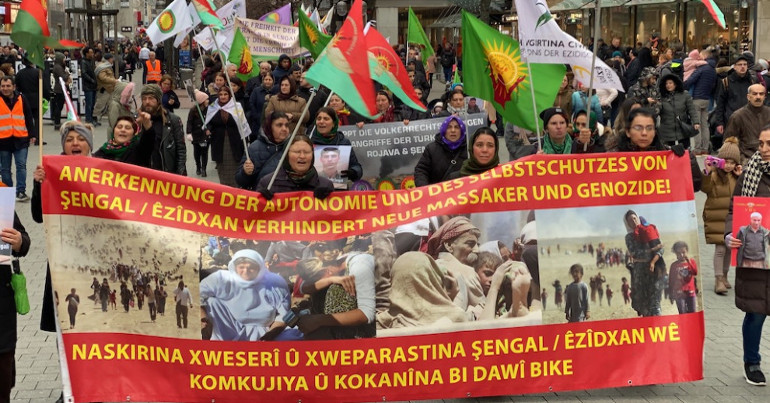 On Wednesday 15 January, the Turkish military launched airstrikes on Iraqi Kurdistan, killing at least four people. The attack was against the Sinjar Resistance Units (YBŞ), a Yazidi militia that participated in the campaign against Daesh (ISIS/ISIL).

The area where the bombing took place is called Sinjar in Arabic, or Şengal (pronounced Shengal) in Kurdish. It is home to many of Iraqi Kurdistan’s persecuted Yazidi community.

This is only the latest Turkish attack against Sinjar. Turkey has repeatedly attacked the YBŞ because the militia is allied to the Kurdistan Worker’s Party (PKK).

The Kurdistan Worker’s Party (PKK) has fought for Kurdish freedom and autonomy since the 1970s. PKK co-founder Abdullah Öcalan has been imprisoned by Turkey for 20 years. Turkey has defined the PKK as a ‘terrorist group’. Most Western states have followed suit, as they see Turkey as a key trading partner and NATO ally.

In 2014, Daesh (Isis/Isil) committed war crimes against the Yazidi minority group in Sinjar. A UN commission said in 2016 that “genocide has occurred and is ongoing”. Daesh reportedly killed over 3,000 Yazidis in its 2014 attack, and kidnapped around 6,800 more to use as sex slaves or fighters.

The PKK and its allies stepped in to prevent further massacres. According to Sykes:

The official army in charge of protecting Sinjar in 2014 allegedly withdrew as Daesh advanced. So as the disaster unfolded, northern Syria’s People’s Protection Units (YPG) and Women’s Protection Units (YPJ) stepped in to create a humanitarian corridor for Yazidi civilians to escape to Syria. Their PKK allies soon joined the rescue efforts. The YPG/YPJ and PKK then fought alongside their allies in the Yazidi Sinjar Resistance Units (YBŞ) and Sinjar Women’s Units (YJŞ) to defeat Daesh. As part of a broad alliance, they liberated the town in 2015.

The #RiseUp4Rojava campaign responded to the latest military action with anger on Twitter. Campaigners pointed out the double standards in Turkey criticising the US assassination of Iranian general Qassem Soleimani in Iraq’s capital Baghdad, while at the same time carrying out it’s own assassinations in Sinjar:

While #Turkey is outraged about the assassination of #Soleimani in Baghdad, it is waging war in Iraqi Kurdistan itself and bombing Yezidi fighters who protect the Yezidis from Daesh. It is simple: Both the US and Turkey should leave #Iraq and #Kurdistan.https://t.co/O3grcPhQog

#Turkey is continuing where the IS left off. The #Ezidi force YBŞ (Sinjar Resistance Units) says that four of their fighters have lost their lives in Turkish shelling on the village Digure of Sinune town in #Sinjar.

Turkey out of Sinjar, #Kurdistan and #Iraq! pic.twitter.com/wENjRanKg8

The Kurdish Freedom Movement’s umbrella organisation in Europe has called for ‘Kurds and their friends’ to demonstrate against the Turkish attacks.

A solidarity action was held in Athens on 18 January in solidarity with the people of Sinjar and against the Turkish bombing:

"We condemn the massacre of Şengal by the Turkish state, which is an enemy of humanity, history, culture and faith."

A demonstration was also held at the railway station in Bielefeld in Germany. One minute’s silence was held for those killed in the attacks. Afterwards, a young Kurdish speaker reportedly told the crowd:

With its attacks Turkey continues the genocide of the ISIS against the Yazidi Kurds in 2014. These attacks are again aimed at a civilian massacre of Kurds and are part of the bloody occupation attempts, which Erdoğan has been trying to achieve hand in hand with its jihadist partners. …

Today is the day when we must unite our forces against the fascist Turkish state and defend ourselves.

We call for action everywhere and to raise the voices! Let us defend the achievements of the people of Shengal and honour those who lost their lives in the historic struggle against the Turkish occupiers and the ISIS. The attack on Shengal is an attack on us all!

Demonstrations against the Turkish bombing were also held in Nuremberg, Esslingen, Kleve, and Frankfurt in Germany; Marseille in France; Stockholm and Helsingborg in Sweden; and Utrecht in the Netherlands.

Turkey’s authoritarian regime is currently violently repressing movements for radical direct democracy inside its own borders. It has invaded and occupied northeast Syria, together with its Jihadist proxy forces in an attempt to crush the Rojava revolution. It regularly launches attacks inside Iraqi Kurdistan too.

The battle lines are clearly drawn between the Turkish state’s autocratic militarism and those calling for freedom and radical people’s democracy in the region. We need to make our voices heard in solidarity with the oppressed and condemn Turkey’s attacks.