The proof that climate chaos and imperialism are inseparable - Canary 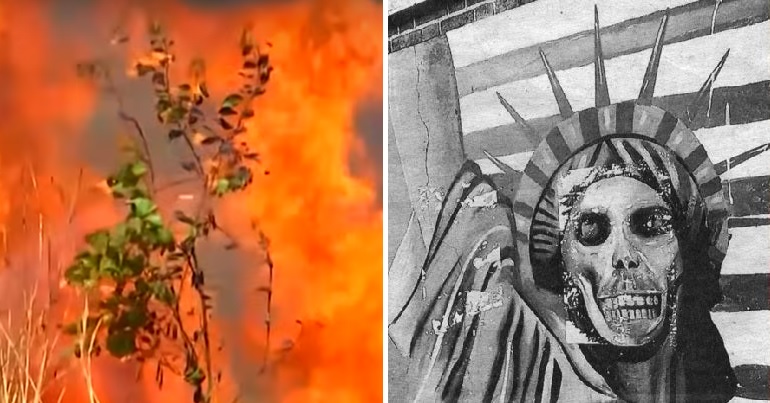 A recent study revealed that the US military is a major culprit in the climate crisis. But as devastating fires burn across the Amazon rainforest, a brief look at Washington’s allies and ‘enemies’ in Latin America shows that the military isn’t the country’s only contribution to global climate breakdown.

What does US imperialism have to do with climate chaos?

Washington has long sought to prevent any kind of progress or democracy in Latin America (and around the world) that could challenge the interests of US elites. In doing so, it has consistently backed far-right regimes responsible for hundreds of thousands of deaths. But what impact is ongoing US interference on the continent having on the global climate crisis? Well one Twitter user summed it up perfectly this week, as Brazil‘s far-right president Jair Bolsonaro continued to oversee a massive rise in fires across the Amazon:

Now the Amazon is burning, this is being directly caused by US Imperialism in the region, it is the USA coup which helped get Bolsonaro elected. Instead of criticizing actual fascists, you all spent your time criticizing the only countries tying to combat climate change! These! pic.twitter.com/pmuaJlSUF5

And a quick analysis suggests he’s right. Because the US seems to be destabilising the Latin American countries that are fighting against climate breakdown while bolstering the ones that aren’t.

Washington has long waged an aggressive cold war against Cuba, for example. And despite a brief reduction of hostility under Barack Obama, Donald Trump is once again tightening the US stranglehold on the island. But Cuba is actually one of the Latin American countries making real efforts to tackle the global climate crisis. Between 2010 and 2016, for example, the percentage of the country’s land filled with forests rose from 27.6% to 30.6% (and from around 14% in 1959). Its reforestation programme began in 1998.

Venezuela has also become a prime target for US aggression in recent years. Sanctions on the country, for example, reportedly killed 40,000 Venezuelans between 2017 and 2018 alone. Yet the country has also made consistent reforestation efforts.

Nicaragua is the third member (along with Cuba and Venezuela) of what US war hawk John Bolton has called a “Troika of Tyranny” in Latin America. As a result, Washington has been increasing its hostility in recent months. But again – surprise, surprise – Nicaragua also has ambitious reforestation plans.

Bolivia’s current left-of-centre government, meanwhile, has not yet faced the full wrath of US imperialism. But it’s also playing its part in fighting climate breakdown. In 2016, for example, it announced a project to replant six million trees.

In short, it seems the countries Washington likes the least in Latin America are also the ones making real efforts to combat the global climate crisis.

We can’t say the same of right-wing US allies in Latin America, though. Long-time US ally Colombia, for example, has reportedly “lost more than 23 thousand square miles of virgin forest since 1990”. Deforestation also seems to be increasing in Honduras, ten years after a US-backed coup. In Brazil, meanwhile, the US was right behind the ‘soft coup‘ that secured Bolsonaro’s path to power. And he’s now seeking to exploit ‘development and economic opportunities’ in the Amazon – which experts often call the “lungs of the planet”.

In other words, as the Labour for a Green New Deal campaign stressed on 23 August:

It is increasingly clear that the choice we face is between colonial, white supremacist capitalism or international ecosocialism.

That seems like a very accurate summary of the choice the world faces today.