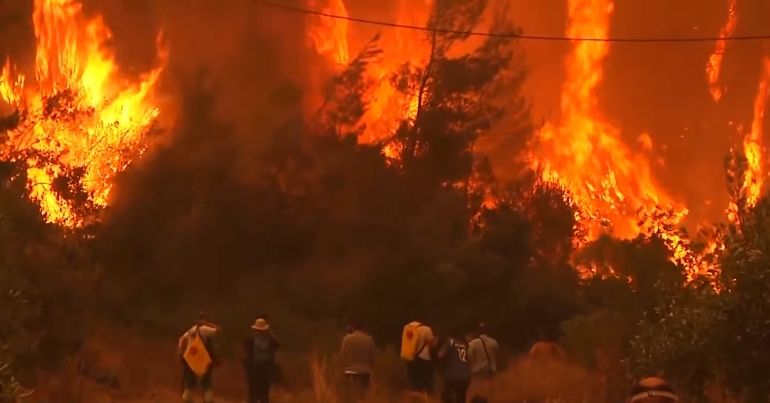 Amidst all this, the IPCC has warned time is running out to salvage the planet.

In its landmark climate report published on 9 August, the UN climate body said immediate and large scale action to reduce emissions is the only way to prevent catastrophic temperature rises.

In order to take the level of action needed, major change is needed across the board, affecting both big corporations and our daily lives.

The impacts of catastrophic climate change are unfolding right before us, all over the world. This summer alone has brought a barrage of extreme weather events from wildfires to deadly flooding.

The IPCC report names humans as the “unequivocal” drivers of climate change, estimating that CO2 concentrations were higher in 2019 than they have been at any time in the past two million years.

Similarly, surface temperatures have increased since 1970 at the fastest rate of any 50 years in the last 2000 years.

As a result, sea ice levels are decreasing faster while sea levels rise faster. Heatwaves, droughts, heavy precipitation, and cyclones are all increasing.

In 2020 alone, more people were displaced by climate disasters than by conflicts, particularly in the poorest nations. The rise of extreme weather events will only increase this.

The Paris Agreement seeks to limit global temperature increase to 1.5 degrees, a target that experts have warned several times we aren’t on track to meet.

Estimates in today’s report say that “immediate, rapid and large-scale” changes are needed to our greenhouse gas emissions, or warming may not even be limited to two degrees, let alone 1.5.

Working Group I of the IPCC estimates that strong action to reduce emissions would lead to an immediate increase in air quality, though temperature stabilisation may take 20-30 more years.

Climate change is already affecting every region on Earth, in multiple ways. The changes we experience will increase with additional warming.

With the report’s warnings, climate activists are taking to the streets to demand a different future.

Extinction Rebellion have vowed to disrupt the City of London with two weeks of action to disrupt the political economy. Campaigners are demanding that the UK stop all fossil fuel investment immediately.

We are in the midst of a collective act of global, social evil which is unprecedented in all of history. We spend more time measuring it than trying to stop it, this is in and of itself a crime. …

This government is a joke, telling us how to wash our dishes when they should be leading the world towards a mobilisation that saves humanity. The UK has a duty to set a good example and other countries will follow. People want to live, but we need leadership and it’s nowhere to be seen.

The UK financial sector funded 805m tonnes of carbon dioxide in 2019 alone, nearly double the emissions for the whole of the UK in the same year.

Zhai, who is also secretary general of the Chinese meteorological society, added:

Stabilizing the climate will require strong, rapid, and sustained reductions in greenhouse gas emissions, and reaching net zero CO2 emissions. Limiting other greenhouse gases and air pollutants, especially methane, could have benefits both for health and the climate.

To do this, we need more ambitious targets.

The UK government announced in December that it would end ‘direct support‘ for the overseas fossil fuel sector. However, several campaigners argued that fine print exceptions still meant UK money would be spent on fossil fuels.

In March, the government approved oil drilling if companies were deemed ‘climate compatible‘.

Instead, activists are calling for a complete economic overhaul. A campaign for a Green New Deal asks for the movement of the UK’s economy away from carbon and the creation of jobs in clean industries.

Global campaigners say the transformation will require big companies being held to account for their polluting actions.

A lot of the changes will be big and systematic – as is often pointed out, a small number of large companies are responsible for the majority of fossil fuel emissions.

But our daily lives will have to change too.

Small changes by households in how we use fossil fuels could still have a large impact on global emissions.

Although the conclusions of today’s report create a bleak future, the authors say there is still time. The government’s first step should be to plan at COP26 for how they can restructure the economy to cut emissions as well as encourage cuts at home.