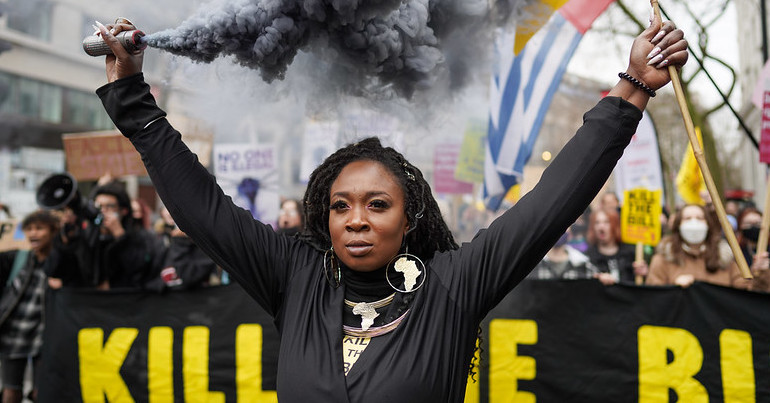 A number of new authoritarian laws are in the Tory government pipeline this year. The Police, Crime, Sentencing and Courts Bill has already been a controversial proposal with hundreds of Kill the Bill demonstrations around the country. But it’s not the only new law that should be worrying us. In fact, there’s a whole raft of similarly repressive legislation in the works.

Here’s a list of which bills are coming up and why they’re alarming.

The Online Safety Bill is currently only in draft form, but there are already worries about free speech and government censorship.

The Department for Digital, Culture, Media and Sport (DCMS), which wrote the bill, says:

there are increasing levels of public concern about online content and activity which is lawful but potentially harmful. This type of activity can range from online bullying and abuse, to advocacy of self-harm, to spreading disinformation and misinformation. Whilst this behaviour may fall short of amounting to a criminal offence, it can have corrosive and damaging effects…

In the same explanatory note, it goes on to say that providers of online services, like Twitter and Facebook, would be forced by the government to put more regulations in place for their users:

The Bill is intended to make the services it regulates safer by placing responsibilities on the providers of those services in relation to content that is illegal or which, although legal, is harmful to children or adults.

the Online Safety Bill in its current form is fundamentally flawed and destined to negatively impact fundamental rights to privacy and freedom of expression in the UK.

Big Brother Watch has also built the Save Online Speech Coalition, made up of digital rights activists. Its statement insists:

the Online Safety Bill will impose a two-tier system for freedom of expression, with extra restrictions for lawful speech, simply because it appears online.

Any further restrictions on our right to free speech must be in line with UK law and decided on in a democratic, parliamentary process — not through the backdoor with a blank cheque handed to a state regulator and tech companies.

In 2021, the government published a document which set out its intention to replace the Human Rights Act with a Bill of Rights. The consultation is still ongoing and has yet to reach the Houses of Parliament. Civil liberties organisations, unions, activists, and more have come together against this proposal in what could be the largest coalition of its kind in UK history.

It’s telling that such a large and diverse number of groups have come together to organise against the government’s proposal. A statement from the coalition makes it clear that whilst the Human Rights Act can be improved:

Any government that cares about freedom and justice should celebrate and protect these vital institutions and never demean or threaten them.

The Health and Care Bill has passed through the House of Commons and is currently in the House of Lords. The Canary has produced extensive coverage of the bill and, once again, many campaigners have voiced their concerns.

Back in the summer of 2021, Dr Julia Patterson of campaigning group Every Doctor explained how the bill wants to set up Integrated Care Systems (ICS) – and why that’s a problem:

The way that this bill is restructuring the NHS is that it’s setting up things called integrated care boards in local areas who previously have held responsibility for the care of their local populations. And those care boards are going to be able to help private companies and members from private companies will be able to sit on the boards, they will be handling public money and making decisions about how that money is spent.

Anti-privatisation campaigner Pascale Robinson of We Own It told us:

This bill is hugely dangerous for our NHS. And many have argued that it will be the end of the NHS as we know it, because they are changing NHS structures in so many ways.

The Nationality and Borders Bill has also passed through the House of Commons and is currently in the House of Lords.

Once again, the likes of Amnesty International UK have expressed grave concern at the content of the bill. The rights organisation said:

The Government has introduced a raft of measures in a new piece of legislation that, if passed, will create significant obstacles and harms to people seeking asylum in the UK’s asylum system.

Four barristers have also come together to warn that the bill will lead to challenges from international human rights and refugee treaties. This bill will allow the government to strip people of their citizenship, as well as allowing potentially lethal push-backs in the Channel. According to Scottish social justice secretary Shona Robison and her Welsh counterpart Jane Hutt:

And as Channel Rescue previously told The Canary:

Once again, this government has opened itself up to challenges on the basis of human rights, global conventions around refugees, and the stripping of civil liberties.

The Elections Bill has also passed through the House of Commons and is currently in the House of Lords. As The Canary’s Curtis Daly explains, the bill attempts to push through barriers to voting by requiring voter ID:

At its heart this is a civil liberties issue. In a society in which wealth and power grants you more access and democracy is fading away, the last thing we should be doing is adding more barriers for voters.

Once again, a coalition of campaigners, trade unions, and rights groups have come together to warn of the dangers of this bill:

This Bill represents an attack on the UK’s proud democratic tradition and on some of our most fundamental rights.

The independence of the regulatory body, the Electoral Commission, is also under threat. The Electoral Reform Society and Fair Vote UK have both criticised the bill for presenting barriers to democracy and making it harder for people to vote.

The Judicial Review and Courts Bill is currently being read in the House of Commons. The right to judicial review is an important part of the justice system, and this bill plans to strip that back. Even Conservative MP David Davis, among other MPs from across the aisle, has criticised the plans:

The government plans to restrict the use of judicial review in an obvious attempt to avoid accountability. Such attempts to consolidate power are profoundly un-conservative and forget that, in a society governed by the rule of law, the government does not always get its way.

The effectiveness of rule of law is another conversation. However, the judicial review mechansim is one of the essential tools we all have to hold governments and government bodies to account.

The Police, Crime, Sentencing and Courts Bill, with its attacks on our right to protest, has had the most vocal opposition to it, with Kill the Bill protests taking place across the country.

As Kill the Bill coalition explain:

There is no version of this bill that is tolerable. Whilst we support the many efforts to stop this bill passing through parliament, we also call on all groups and organisations to stand unified in demanding nothing less than a complete rejection of the bill.

While many people celebrated when the House of Lords rejected some of the most draconian amendments to the bill, it is still a fundamental attack on our right to protest. In fact, much of the bill is unchanged from the original legislation people took to the streets to oppose in March 2021.

Moreover, the bill is not just about protest. It is also a fundamentally racist bill. The bill will criminalise the lives of Gypsy, Roma and Traveller communities. Other provisions include a pilot scheme for serious violence prevention orders and the introduction of secure schools. These will be used to target already marginalised communities by an institutionally racist police force.

On their own, each of these pieces of legislation is deeply worrying. Taken together, they tell us that this is not a slide into fascism but an arrival. The fact that so many campaign groups, trade unions, charities, and rights organisations are coming together in coalition over this range of bills shows you just how repressive these proposals are.

It also means it’s more important than ever for independent media to be allied with the activists, campaigners, and communities.

The time for organised, ‘A-to-B’ marches where everyone carries mass-printed banners on a lovely day-out and the organisers pay the police to let them protest is over. Done. Finished. We’ve got to stop playing the game by the system’s rules. And instead, we need to make the system unmanageable.

Polite protest, petitions, and the like are not going to make a difference here. This is a government looking to strip citizenship, remove avenues for legal review, introduce further barriers to voting, further privatise healthcare, weaken human rights protections, threaten free speech – and, on top of all that, criminalise our right to protest about any of it!

Featured image via Flickr/Alisdare Hickson, cropped to 770×403 pixels, licensed under CC BY SA 2.0