Don’t buy the establishment's outrage. Real journalism is their enemy. - The Canary 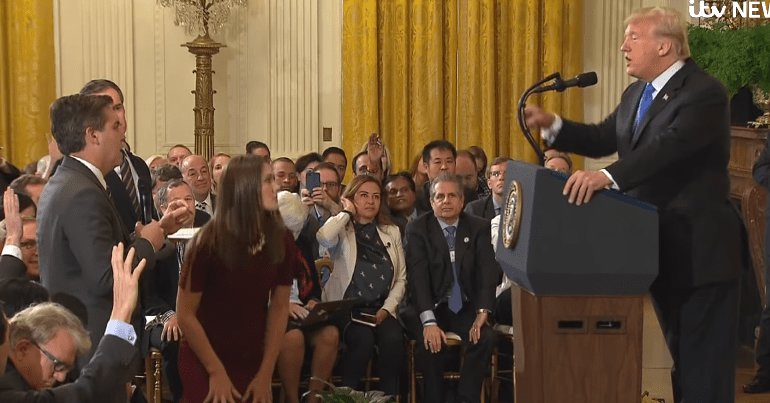 Trump’s attack on @CNN’s Jim Acosta is an attack on the right of all journalists everywhere to ask tough questions of people in power. That’s our job pic.twitter.com/LkbqbjVsYo

That’s true: we must show solidarity with all journalists in the face of attacks on fundamental press freedoms.

Trump went on to make up accusations that Acosta ‘placed his hands’ on a young female White House staffer. And then the president revoked his press pass. All of Trump’s actions here are wrong and dangerous.

However, our solidarity should include Acosta – not end with him.

The establishment’s demonisation of groundbreaking journalism

Julian Assange, for example, is the founder of a publication that has won almost 20 prestigious journalistic awards. But he could end up facing the death penalty under the US Espionage Act simply for exposing the actions of the powerful.

The actions of the corporate media on this matter, meanwhile, have been revealing. Outlets like the BBC and the Guardian in particular have actively engaged in what amounts to a disinformation campaign against Assange and WikiLeaks. It doesn’t seem to matter that a UN panel has ruled that the UK government has been arbitrarily detaining Assange and depriving him of his freedom.

There are many others signs that Robinson-esque ‘solidarity’ only applies to a certain kind of journalist. Recently, for example, Saudi Arabia allegedly murdered Washington Post journalist Jamal Khashoggi. And as with CNN‘s Acosta, there was widespread establishment outrage. Too right: a hit squad reportedly tortured, murdered and then dismembered Khashoggi (not necessarily in that order) in a Saudi consulate in Istanbul.

But that same Saudi Arabian regime is conducting a genocidal war against Yemen. And the brutal dictatorship has bombarded over 200 TV and radio stations, destroyed newspaper headquarters and killed several journalists. Yet the outrage is nowhere to be seen.

NATO ally Turkey, meanwhile, has been found guilty of war crimes against Kurdish civilians. Reporters Without Borders call the country “the world’s biggest prison for professional journalists”. And its current regime has shut down at least 180 media outlets. Yet we don’t see wall-to-wall coverage about that in the West’s establishment media.

Murdered – despite a clear press badge

Over in Palestine, journalists also face death. During the ongoing Palestinian protests in Gaza, for example, Israeli forces have killed multiple journalists. Israeli snipers killed 30-year-old Yaser Murtaja even though he was wearing body armour that clearly read ‘press’. Israel’s military has said that it knows “where every bullet landed” while tackling protestors. Still, there is no prominent media recognition of Israel murdering Palestinian journalists.

The BBC, meanwhile, stands accused of suppressing the reality of the Israeli occupation.

Parts of the establishment actively target real journalism. WikiLeaks revealed, for example, that the UK intelligence services refer to investigative journalists as “threats”. That probably doesn’t apply to many CNN journalists, though. As WikiLeaks also exposed, one CNN reporter colluded with corporate shill Hillary Clinton and sent her debate questions during the US Democratic primary in 2016.

Instead of solidarity with “journalists everywhere”, we consistently see the demonisation of Assange – a journalist who has revealed crimes such as 66,000 civilian deaths in Iraq which had been hushed up. And we see the corporate media downplaying the systematic killing of journalists in places like Palestine and Yemen.

Let’s be clear: the establishment views real journalism – which serves ordinary people while holding the powerful to account – as its enemy. And the hierarchical structure of corporate media outlets means that its journalists cannot deviate far from the pro-establishment editorial line.

Our solidarity must go beyond mainstream reporters such as Acosta. It must extend to all journalists who hold the powerful to account.

– Support The Canary so we can keep holding the powerful to account and exposing the corporate bias of the mainstream media.